The year in TV: How the shows of 2014 remade "masculinity" on television

From "True Detective" to "Looking" to "Mad Men," TV took the trope of the antihero and picked it apart 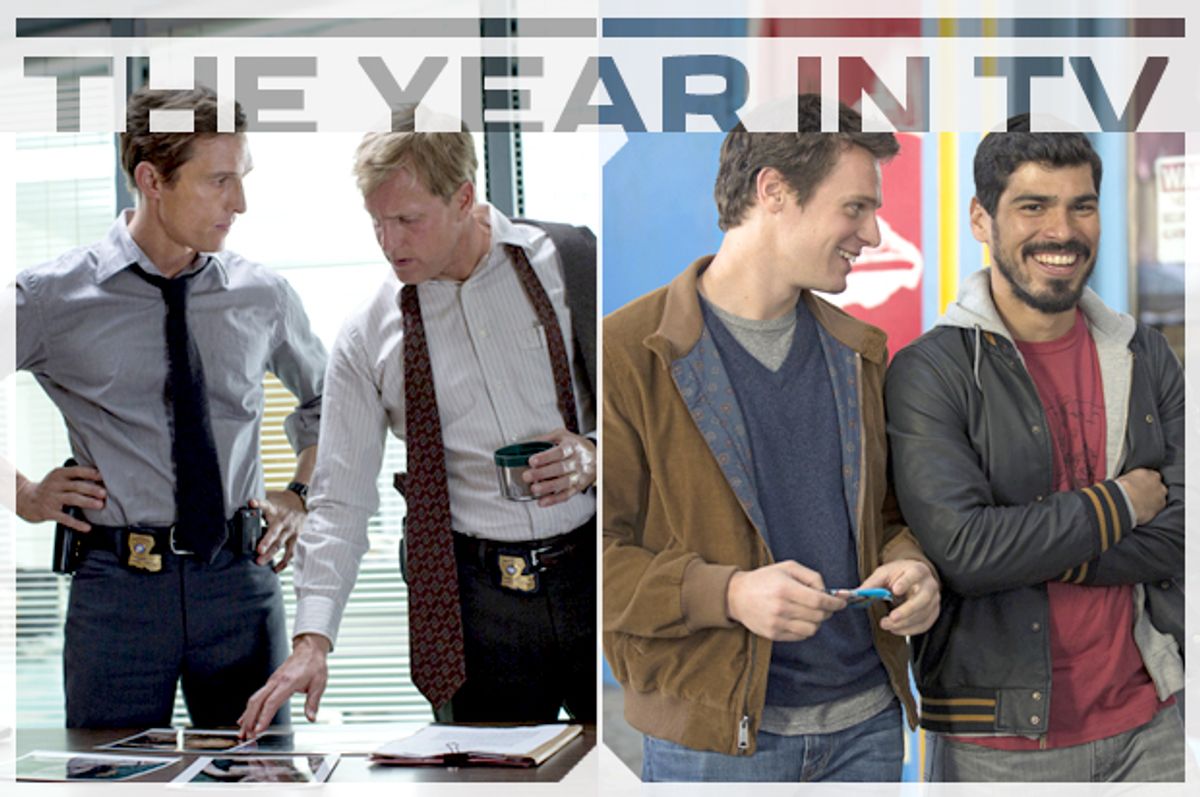 This is the fourth piece in a series unpacking the shows that broke serious new ground on TV in 2014.

It seems that the war of the sexes, such as it is, is a battle being waged on television. Nearly every drama that I count as among the best of the year — “True Detective,” “Mad Men,” “The Good Wife,” “Outlander,” “The Americans,” “Orange Is the New Black” — grappled with gender, sometimes quite literally. Over and over again, the men and women in television drama put on and stripped off layers of artifice: In “Outlander,” Claire Randall’s layers and layers of clothing took up time and space; in “The Americans,” wigs and coats were not just disguises but identities. Viola Davis, in “How to Get Away With Murder,” slowly peeled off her false eyelashes and slipped her wig off her hair. The inmates at Litchfield Penitentiary, typically dressed in convict uniforms, got a chance to wear business-formal clothes for a workshop. “Transparent’s" Maura came out of the closet while her daughter Ali played with both masculine and feminine clothing. “You’re born naked, and the rest is drag,” RuPaul Charles told his contestants on “RuPaul’s Drag Race”; apparently, the rest of television was listening.

Over the last few weeks I’ve written primarily about comedies — about how half-hour programming found ways to reconstruct love, family and the workplace, those three major spheres of American life. With television dramas, there’s simultaneously less and more to say. Less, because dramas have a way of laying out their themes in plain sight; more, because those themes offer a lot of material to dig into. With gender — the deconstruction and performance of it — every drama, high-, low-, or middlebrow, has something to say on it; it’s impossible to escape commenting on men and women if your show is going to star men and women.

For the first several years of the prestige drama, audiences were flooded with male antiheroes — a much-discussed phenomenon starring Tony Soprano, Don Draper, Walter White and Jimmy McNulty. The second wave seems to be female characters who aren’t just around for men to betray or sleep with; characters like Olivia Pope on “Scandal,” Alicia Florrick on “The Good Wife” and even Hannah Horvath on “Girls.” This year’s debuts feature a few more excellent shows in this mold — shows that revive not just the complex female protagonist but also what media studies calls the female gaze. A great deal of what we see on television assumes a male viewer — the “gender-neutral” “him” — which is further reflected by the demographics of Hollywood’s directors, writers and producers, who are overwhelmingly white men. “The Good Wife” has taken to the female gaze literally, by frequently dropping the camera into the point-of-view of Alicia, so we see the world as she does. “Outlander” took it one step further by writing a sex scene that was not just about a woman but also distinctly sensitive to a mixed or even predominantly female audience. “Orange Is the New Black,” “Penny Dreadful,” “How to Get Away With Murder” and “Transparent” are about women far more than they are about men — and not just for the novelty, either, as every show listed has found a way to humanize its female characters in different ways. Walter White is dead, and in his place is a crop of complex women with excellent clothes, and we’re all better off.

I’ve noticed this year, though, in a few separate shows, that the focus has shifted again to masculinity, in an unexpectedly moving way. The early years of the antihero craze seemed to be tailored to cable television’s realization that they could show sex, drugs and murder on-screen without fearing for the consequences; the result has been an orgy of similar shows that are largely about men reveling in bad behavior, such as “Entourage,” “Ray Donovan” and “Sons of Anarchy” — the implication often being that acting out is all that men wanted to do, in the face of social constructs enforced by largely female wet blankets — your Skyler Whites. What only the best shows about male antiheroes got around to discussing was that this vision of men behaving badly was limited and suffocating; a desperate attempt at machismo that didn’t make anyone happy. If anything, the frantic debauchery of these antiheroes seemed to be in response to a world that was expanding faster than they themselves could; a world where gender and sexuality are increasingly fluid, where national borders matter less and less.

In 2014, as female characters are getting the chance to broaden what it means to be a woman, a few male “antiheroes” are also breaking that antihero mold. More specifically, they’re breaking masculinity, by being neither heroes (what we used to require of men) or antiheroes (what we seem to require of them now).

That’s a circuitous way of getting to “True Detective,” which is without a doubt the show that will define 2014 for me. It’s a controversial program; numerous female critics have come down hard on the show, including Emily Nussbaum at the New Yorker, who observed that every woman in the story is a “paper-thin” archetype, with barely enough character to go around. As a female critic, my appreciation for “True Detective” is often met with surprise and confusion; this is a show for guys, runs the implication.

And it is — but that came to be why I valued it. What I saw in “True Detective” was two men trying to figure out how to be men — and repeatedly failing, even right up to the end. The story undoubtedly marginalizes every woman in the story, but at least in part, that’s because it marginalizes everyone who isn’t Marty or Rust. The only thing that becomes real and of consequence in the show is the intense connection between these two men, who routinely screw other people over and get screwed, themselves. As the series continues, they move from being handsome and/or swaggering men in their prime to solitary sad sacks, watching TV with one hand down their pants. Marty, the show’s pragmatist, can’t seem to figure out what went wrong, even as his own hypocrisy about what husbands are and what wives are destroys his marriage and damages his relationship to his daughters. Rust, the show’s philosopher, accepts the margins of society as the only place a near-monster like him can survive.

What binds them together, and propels them out of their respective ruts, is their unexpected investment in each other and in this case they worked on so long ago — a case that seemed to scrape away their respective bullshit to reveal who they really were, who they were really trying to be. And as the story comes to its violent end, Rust and Marty talk about existence separate from the false trappings of machismo, attempting instead to talk about their souls, about good and bad and fighting for the light. It didn’t land for everyone, and it wasn’t perfect; and sure, I gave “True Detective” a pass for diminishing its female characters because I liked the show, but that hardly makes its exclusion of women noble, either. But there was something magical in what that show tried to say about not what you can get away with by being a man, and instead, what it means.

I found this theme in another HBO original series: “Looking,” Andrew Haigh’s half-hour drama about gay men in San Francisco. The stakes for that show were much different — love and work, not life and death — but the sensibility of remaking masculinity was the same. It’s underscored by the show’s title, a word that implies so much. “Looking” means searching for something you think you don’t have at present; “looking” means not-finding, too. It’s that middle part of the journey, between knowing what you’re trying to get and finally being able to get it. That limbo is a sense that permeates the show: Haigh’s young men are largely unmoored, bouncing between partners, careers and apartments with a carefree attitude that is sometimes authentic and sometimes forced. Around them, San Francisco is a city in transformation, as tech companies pour money into their neighborhoods. And as these three men rely on each other to be their friends and their family in a world still largely hostile to homosexuality, they each have to reckon with what they’re really looking for — the implication being, on some level, that what you’re looking for defines who you are.

No conversation about masculinity on television would be complete without discussing Matthew Weiner’s “Mad Men,” which alone among the antihero dramas has consistently had its themes in sight. Don Draper is a shadow-man, a construct created out of another man’s fantasies, who exists to be everyone else’s chauvinist hero. This year, in the first part of Season 7, we saw Don closer to collapse than we’ve ever seen him — unemployed and separated from his wife, but more than that, devoid of the secrets that made him the man’s man of the 1960s. The illusion of what men are supposed to be is eating Don alive, from the inside out; he’s become the empty suit of the show’s title sequence, falling from a very high height.

Dismantling masculinity, as Jess Zimmerman observes, helps everyone; these television shows have offered different ways to go about telling that story. It’s a scarier world, past the debauchery of antihero dramas, but it’s a saner one, too. One where Olivia Pope is the president, instead of the consistently unreliable Fitzwilliam Grant; one where Dick Whitman can be as gentle and loving as he wants without being called a sissy. As he’s discovering in 1969, it’s not just about advancing an idea of justice, about what women should be, and men shouldn’t. It’s about being what you are, scraped clean of the drag of society; it’s about being who you were born to be. And not just surviving, but thriving.