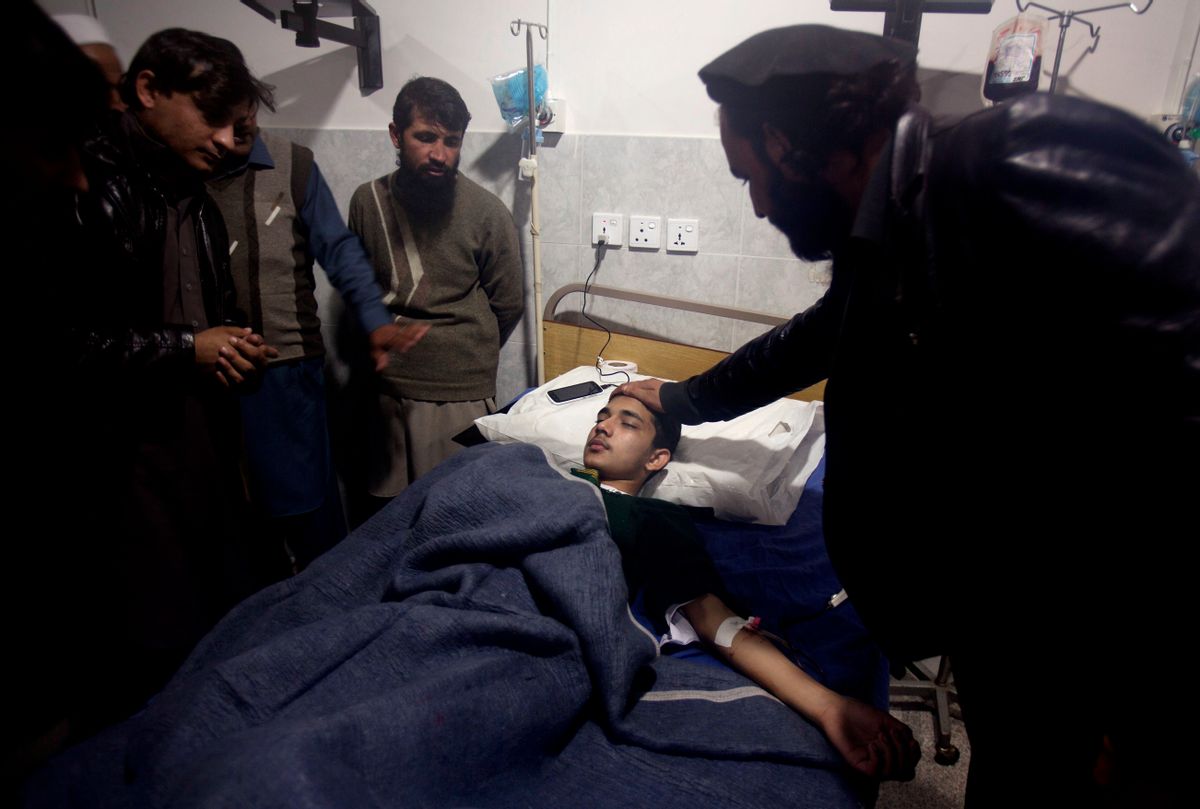 A man comforts a child who survives a Taliban attack on a school that killed more than 100 people, admits at a local hospital in Peshawar, Pakistan, Tuesday, Dec. 16, 2014. Taliban gunmen stormed a military-run school in the northwestern Pakistani city of Peshawar on Tuesday, killing at least 100 people, mostly children, before Pakistani officials declared a military operation to clear the school over. (AP Photo/B.K. Bangash) (AP)
--

1. PAKISTAN VOWS TO RETALIATE AGAINST TALIBAN

Responding to a horrific attack on a school, the government pledges to step up a military campaign that — along with U.S. drone strikes — has targeted the militants.

On the streets of Moscow, panicky shoppers rush to buy home appliances before they become even more expensive.

3. WHICH MEMBER OF POLITICAL DYNASTY IS POISED TO RUN IN 2016

Jeb Bush all but declares his candidacy for president more than a year before the first primaries.

An Iraq war vet suspected of killing his ex-wife and five of her relatives is discovered dead with self-inflicted stab wounds near his suburban Philadelphia home.

A group calling itself the Guardians of Peace makes ominous threats against movie theaters showing Sony Pictures' "The Interview."

Australians want to know why the suspect, who had a violent criminal history, was free on bail.

North Carolina Gov. Pat McCrory and U.S. Rep. Mark Sanford of South Carolina deny they did anything improper by accepting the payouts, which were not fully described in their ethics statements.

8. HOW COMIC BOOKS ARE PROMOTING DIVERSITY

With Marvel Comics and DC Comics leading the way, the new Captain America is black, Thor is a woman, Spider-Man is part-Puerto Rican and Ms. Marvel is Muslim.

Los Angeles prosecutors decline to file charges against the TV icon after a woman recently claimed the comedian molested her at the mansion around 1974.

10. HEY A-ROD, LEAVE YOUR GLOVE IN THE DUGOUT

Yankees GM Brian Cashman tells the AP's Ron Blum that Alex Rodriguez can expect to be only a designated hitter this coming season.