"Can you smell the Aqua Velva!": Why Jeb Bush is this year's Fred Thompson

GOP and media insiders are obsessed with another "perfect" candidate. Here's what they're missing -- yet again 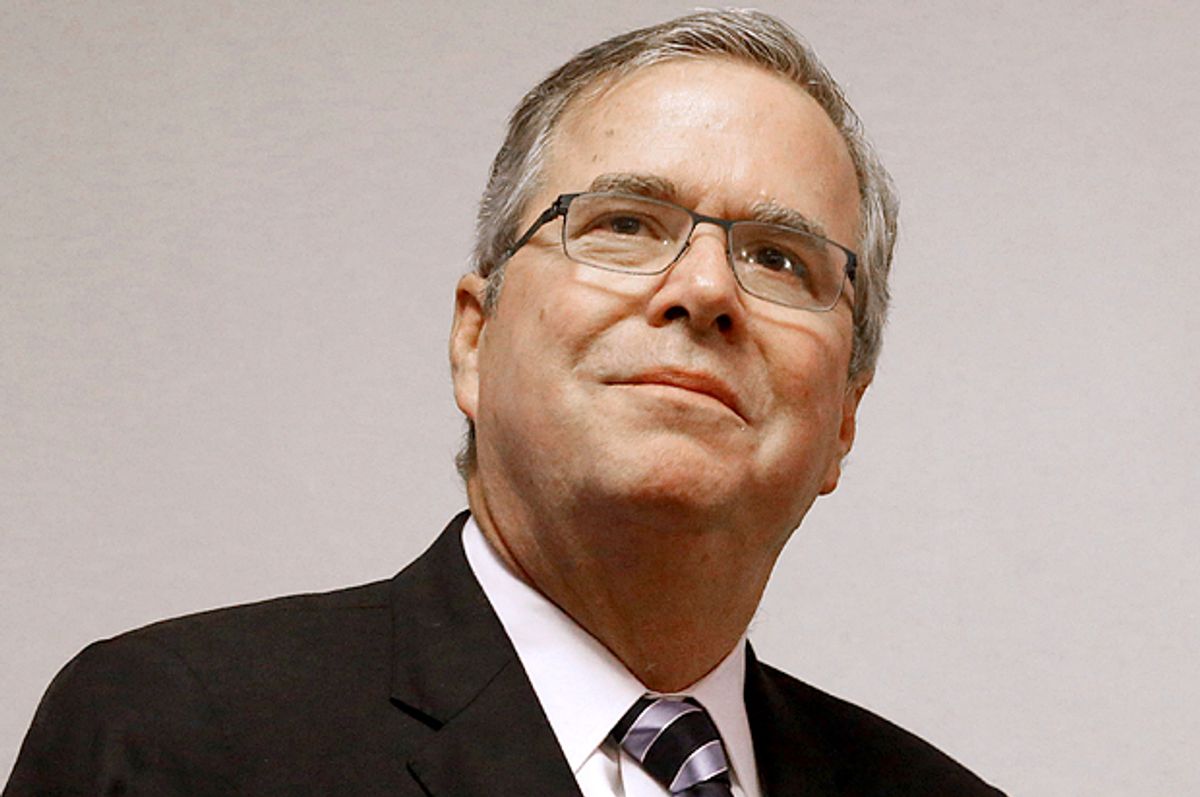 So the suspense is almost over. Jeb Bush has finally announced that he is officially thinking that he might explore the possibility of maybe running for president. Feel the magic, the Bush is back. I confess that I'm still skeptical. There's just something missing from Jeb's demeanor, a certain fire, that one usually sees in serious presidential candidates. But one can certainly see why he'd do it anyway.

First, there seems to have been a full-court family press and in his family that's got to feel like facing a firing squad. After all, somebody has to rescue the family legacy and he's all they've got left. Poppy was pretty much driven out of office by his own party for raising taxes at a time when Newt Gingrich and his revolutionaries were turning over the Beltway barricades. Junior tried to reverse Poppy's legacy by making gigantic tax cuts for the rich his immediate priority but then he mucked up the family legacy in Iraq and left office with the lowest approval ratings on record. And, needless to say, there is the unfinished business of putting the Clintons in their places once and for all. No matter how much they all embrace each other as "family" today, the Bushes bear grudges. Beating Hillary would finally even that score.

On the practical side, the family also understands something else: The only way that Jeb can possibly finesse the dynasty issue is if there is another dynastic scion on the other side. Sure, everyone will complain about it, but neither side would be disadvantaged by the perception that rather than following the normal processes of a democratic Republic, the two major parties seem to be run by competing houses of noble blood. Imagine if yet another Bush were running against a new face in the Democratic Party? The odds wouldn't be nearly as good.

And finally, they think Jeb can win. As George W. told Candy Crowley just this weekend, with his characteristic arrogance, "Yeah, I think he'd beat 'er." And it appears that much of establishment Washington is beside itself at the prospect of the "grown-ups" once again coming to town. The Washington Post's  Ruth Marcus is convinced that Jeb is the one guy to bring sexy back to the GOP:

Even the notion that Bush is seriously considering running — his son told ABC’s Jonathan Karl that it is “more than likely” — is a comforting sign. Jeb Bush is not naive about the GOP’s loony tendencies and the distorted ideological landscape of its nominating process. For him to be weighing the race indicates that he believes those extremist instincts can be tamed.

And this is why a Bush candidacy would be good for the country as well. A saner Republican Party would produce saner, more productive politics.

Yes, we could once again have the productive politics that produced huge tax cuts for millionaires and invaded countries that didn't attack us. Maybe he could really pick up where his brother left off and oversee a housing bubble and financial crisis and finally bring the world economy fully to its knees. Lord knows, that Bush brand of "sane" Republicanism that decided the U.S. needed to "take the gloves off" is sorely needed today. And hey, Cheney looks pretty energetic and vital these days; defending torture has given him a new lease on life. And Rummy's at liberty, I'm sure, so maybe they could get the whole band back together.

I don't have a crystal ball and I have no idea if Jeb can win the nomination or the general election. Political observers all seem to think he's got a lot of problems with his business dealings, but again, I'm fairly sure they figure they can throw the Clinton Foundation stuff back at Hillary and neutralize any Democratic attacks. Everyone except the Villagers are convinced that his advocacy for Common Core and immigration reform will make him unsuitable to the GOP base and I suspect that's true. But I also suspect that base will be absolutely fine with Bush's past transgressions as long as he promises to destroy all public education in a way they prefer and ensure that only "good" foreigners like his wife are allowed to stay in the country. (They perversely prefer a politician over whom they can exert their power and force to publicly abandon his principles to gain their favor.) So it remains to be seen if his tepid little feints to a couple of center-right issues are deal breakers.

But I still cannot help seeing the reflection of another would-be GOP savior in the eyes of Jeb Bush: Fred Thompson. Back in 2008, he was widely assumed by everyone who matters to be the daddy we needed to rescue us from Junior and the crazy Democrats who kept talking about hope and change and breaking glass ceilings and all that other irrelevant stuff. Recall Chris Matthews' famous comment about the manly Fred:

"Can you smell the English leather on this guy, the Aqua Velva, the sort of mature man's shaving cream, or whatever, you know, after he shaved? Do you smell that sort of--a little bit of cigar smoke?"

And then recall the fact that for all the excitement about the man who could bring a little of that Reaganesque Hollywood shine back to the GOP, he never really seemed to want it. He wandered around Iowa like a blind salmon, riding a scooter like a bat out of hell through the state fair with all the enthusiasm of Phyllis Schlafly at the Michigan Womyn's Festival. His somnambulant performance in debates was enough to convince most people that the most he'd studied up on the GOP agenda was some cursory cramming of Fox News highlights.

They wanted him but he didn't want them. And it showed. Jeb has better handlers and a much bigger incentive to run than Frederick of Hollywood ever had: the family honor. But he has that same look of desultory obligation about him. If George Bush Sr. was a drama and Junior was a tragedy, that leaves Jeb with the farce. From the look of rueful surrender on his face, it appears that he knows it. He always was the smart one.