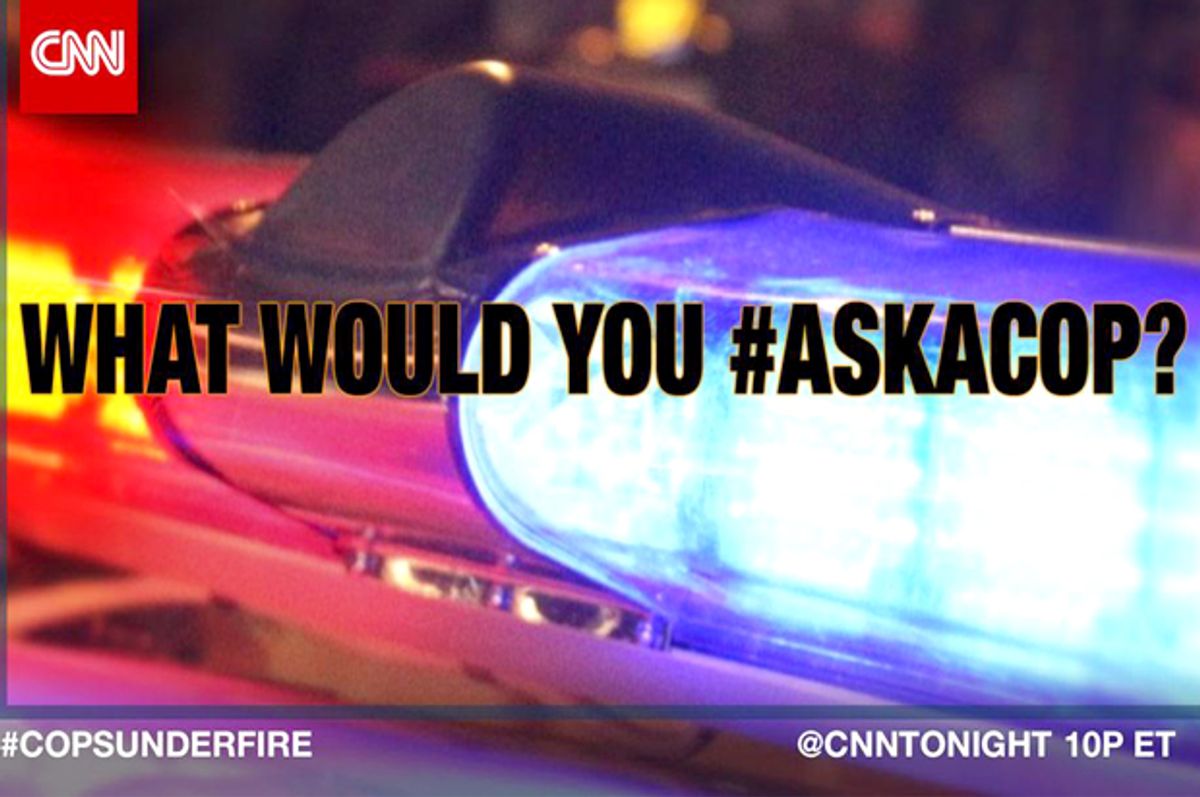 In a masterful display of the cynical possibilities of digital marketing, CNN hyped yesterday's town hall episode of “CNN Tonight” featuring a panel of police officers discussing the state of American law enforcement on Twitter, asking users to #AskACop what they’d like to see addressed on the show. Of course Twitter users took the opportunity to hijack what looked like an earnest—even naïve!—request for viewer input and use it to level pointed barbs and bleak jokes about unchecked violence and racism on the force.

#AskACop what made a sleeping 7-year-old girl dangerous to the cop who shot her dead? #AiyanaJones pic.twitter.com/Mdhf0X8Ns4

Do you prefer a sleeper hold over a choke hold when harassing innocent citizens? #AskACop — The • Steve (@DarthCoffeeus) December 17, 2014

Why is it so difficult to correctly identify inanimate objects like sandwiches, cellphones and wallets when they're in black hands? #AskACop — Beezy The Bruh™ (@ImNotBeezy) December 17, 2014

But how innocent could this request really have been? CNN thanks Twitter for playing along:

I don't know about that. It defies belief that CNN’s promotions team didn’t expect—even hope—the hashtag to trend due to its provocative nature when they launched the #AskACop campaign, and the way to do that is through deliberately courting controversy. You don’t have to be a social media wizard to know that Twitter users love one-upping each other in hashtag games, and a seemingly innocent marketing request that opens a controversial and powerful subject up to damning criticism in the form of a meme is irresistible. It’s straight out of the social media backlash playbook.

In one tweet, the “CNN Tonight” episode went from the slightly dull “Don Lemon asks a panel of cops how they’re doing” to the inflammatory “COPS UNDER FIRE!” all but guaranteeing an audience tuning in to see whether Lemon would acknowledge the viewer responses. Along the way, the trending hashtag promoted the show gratis for CNN.

That’s the kind of exposure mere money can't buy on social media—you need the help of the user base to make a media happening feel organic, and the only way Twitter users were going to get excited about a show on how tough it is to be a cop these days is if they already helped take it down. What’s sad about this scenario is how plausible it is that CNN deliberately provoked and exploited the anger, frustration and pain that have built up over the last several months in people who feel that the police operate above the laws they serve. The same pain and anger fueling ongoing protests over the deaths of Michael Brown, Eric Gardner and Tamir Rice, protests that could end up affecting policy and public opinion, were channeled into promoting a TV show that isn't likely to change anyone's mind about the police, violence, race or grand juries.

Hashtag activism isn't just for slacktivists—people connect and build cultural awareness through sharing their pain, as well as their jokes, with strangers. There's something about a hashtag that motivates people to share their worst and best thoughts on a subject that makes Twitter feel like the new town hall every time it happens spontaneously. That's one reason why "promoted" paid advertising hashtags tend to come off as a little lame, like a brand is trying to buy its fans. In this case, it's possible CNN didn't even have to go that far—instead of purchasing their viewers' attention, it may have just opened the door to the critics and the activists, eager to have their say, and let them do the job for free.