The (only) Jeb vs. Hillary silver lining: An end to gross public displays of Bush-Clinton affection 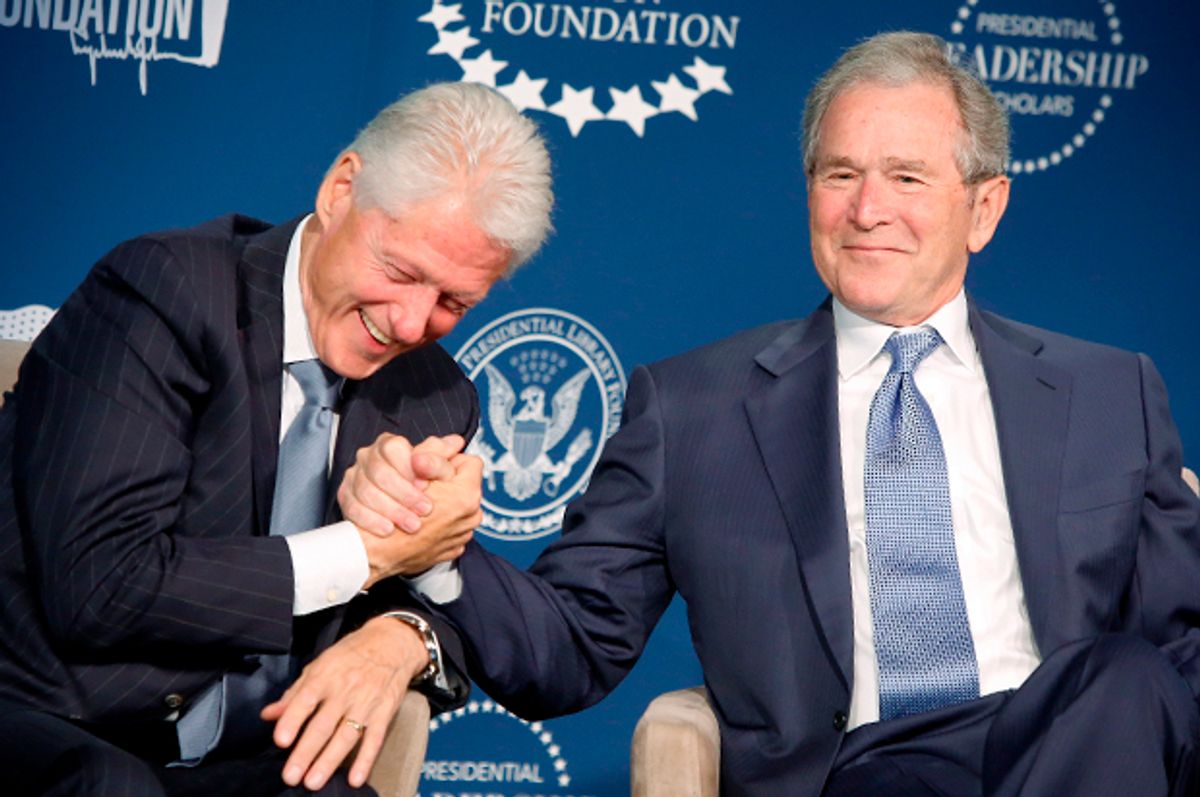 Now that former Gov. Jeb Bush is kinda-sorta in the presidential race and is looking to divide, conquer and fundraise his way to his birthright of a Republican Party nomination, we're facing the all-too-real possibility of the Jeb-Hillary presidential matchup, the nadir our nation has been hurtling toward for 30 years. Bereft of any brighter, optimistic ideals, our respective party establishments are calling in Mommy and Daddy and the billions of dollars they can summon to lord over the twilight.

Jeb vs. Hillary 2016 has been a predictable scenario for the nation to find itself in ever since, well, Barack Obama beat Hillary Clinton for the 2008 Democratic presidential nomination. She would be back as soon as Obama was done running for president, and Jeb would finally get his chance after "enough time" had passed following his brother's collapsing of domestic and international order.

The Clinton and Bush families knew that they'd get their shot soon enough and, to rub it in the country's face, they've been palling around these past however-many years, not even pretending to disguise their pleasure in how American power seems to funnel naturally in their direction.

Since we can't look forward to much in a Jeb-Hillary matchup -- and again, it's really Jeb who's going to have the most difficulty fulfilling his side of the arrangement -- we can at least enjoy certain sideshows that will play themselves out along the long march toward the status quo. We can at least enjoy watching this nauseating kissy-faced relationship of recent times between the Bush and Clinton families fall to tatters as the two clans revert to their more natural warlike bunkers and seek to eliminate each other.

The 1992 election was marked by Bill Clinton portraying George H.W. Bush as a lousy old fart presiding over a crap economy and George H.W. Bush trashing Clinton as a vulgar young sexaholic swindler. They were each correct. Bill Clinton's argument prevailed, though, and Bush Senior resented him for a while. The Bush family got its revenge in 2000 when H.W.'s moronic eldest spawn was able to "win" a presidential election largely by contrasting his staunch Christian family values against those of the philanderer tainting the Oval Office with extra-spousal blow jobs.

Since then -- once they realized that they could more or less trade off power between the families every few election cycles; a good arrangement if you can get it -- there's been a gradual thawing of relationships. At times this arrangement can lead to productive ends, like drawing attention and funds for humanitarian relief.

But ever since George W. Bush left office, the familial relationship has taken a sharp turn toward farce. As Glenn Greenwald notes, they speak of each other as literal family now. Barbara Bush thinks of Bill Clinton as part of the family and Bush Senior as Clinton's adoptive father. Bill Clinton welcomes Poppy and Barb's parentage. And just recently, the world was treated to this display of intra-plutocrat fraternalism on social media:

Jesus Christ. Do people enjoy this? Would people enjoy reading a buddy-buddy account of the boomer generation's top war criminal and neoliberal huckster, respectively, spending a day at Magic Mountain?

They'd better get it done soon. Because if it's Jeb and Hillary, the play dates will stop. This is a silver lining of the race, a modest, entertaining tradeoff for what's otherwise a fulfillment of American political stagnation: We'll get to watch these two families at each other's throats again. Barbara, George H.W. and George W. Bush will disavow their brother-son and his candidate wife as moral abominations in the face of God and country. The Clintons will lambast the Bushes as calcified, entitled blue-blood warlord frauds.

These are the two most selfish, ruthless political families in the country, and that's why they've had such success. It will be funny, at least, to watch them confront each other anew in the next stage of the dialectic and remind the country what sort of creatures they really are behind all the winking, knowing backslaps.