I was there to finish my book, but that turned out to be the least of the rewards of that 8,000-mile journey 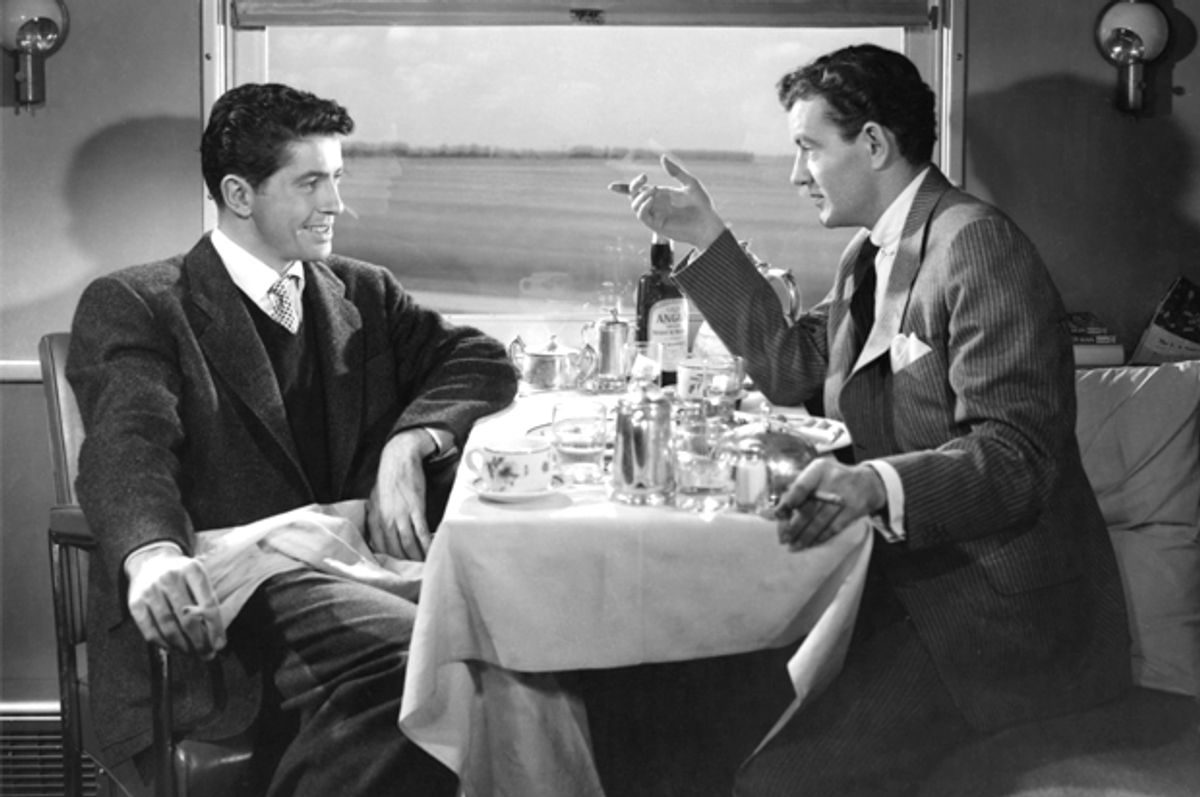 It was just after dawn on the California Zephyr, and my breakfast companion, a Texan, was considering the size of an Amtrak sleeper “roomette.” On the other side of the window,  the sun was turning the mountains pink.  “You can’t cuss out a cat in one of them things,” he observed, “without getting fur in your mouth.”

He was right: The quarters are decidedly cramped. Not only that, but  the equipment is old, some of it dating back to the 1950s. Delays are common: On the long-distance routes trains are routinely two, four, even six hours late.  About the only thing it’s better than is any form of air travel, whatsoever.

Long-distance trains, even in their scruffy, beleaguered condition, still provide an adventure that is unambiguously  romantic: the cast of strangers thrown together in close quarters; the prospect of cocktails in the parlor car; the glimpse of some of America’s most shockingly gorgeous scenery (as well as some of its most spectacular post-industrial ruins) just on the other side of a picture window. As one woman I met on the journey noted, “It costs more to travel this slowly. But it’s worth it.”

I spent 17 days this fall traveling the country by train as one of Amtrak's inaugural crop of "Writers in Residence," a program that fills otherwise unoccupied sleeper berths with authors.  Over 16,000 souls applied for the program, which is a pretty good measure of how eager American writers are to get out of the house.  I have always found trains a great place for work, and it was in hopes of finishing a novel that I left Maine on Nov. 1, heading out the door at 4 a.m. to catch the Downeaster out of Portland bound for Boston.

From there it was on to Chicago on the Lake Shore Limited; over the Rockies and the Sierra Nevadas via the California Zephyr; past Mount Shasta and on to Seattle via the Coast Starlight; from there through Glacier National Park and the northern plains of Montana, and North Dakota via the Empire Builder.

It was a trip of over 8,000 miles, and I got that book finished. But as time went on, it was clear that my own work was the least of the journey’s rewards. For one thing, the jaw-dropping scenery kept demanding that I stare out the window. For another, the ritual of gathering with strangers for dinners and lunches kept me engaged with my fellow passengers, producing conversations with people whom I would otherwise never have met.

One morning I had breakfast with a psychotherapist who was reading the biography of William James, who he suggested “had anticipated everything.” A few days later I was put together with a couple who I erroneously thought were Amish (on account of his abundant beard and her plain bonnet), but who in fact turned out to be Dunkers.  Our conversation was somewhat stilted — they allowed as how they disapprove, among other things, of music, except for the a cappella kind produced by congregants in worship service — but I can honestly say I was grateful to have had it.

On another night, I was partnered with a Hoosier who fixes high-tech instruments and a young woman of about 25 who said she hadn’t been back to New Jersey for seven years; her parents had sent her the money to come home at last. She wasn’t sure she was going to be able to endure her parents' “baloney” (she used another word, in fact), but she’d run out of options, and money, and the desire to keep running.  The man at my side and I gently tried to encourage her to try to imagine the love parents feel, and how dearly they must miss her.  She wasn’t convinced.  “I’ll give them a trial period,” she said.

All the while, America rolled by, in its cussed, contradictory beauty.  I saw a plain covered with hundreds of windmills in Indiana.  I saw a woman hip-deep in a rushing stream in Colorado fly-fishing.  I saw a man all alone in a fallow field in Nebraska who raised his hand as the train rushed by. I waved back, although I knew it wasn’t me he was waving at.

The supervisor of my sleeper in the Zephyr, Dennis Byrne, had the Irish gift of gab.  One morning I asked him what he thought the charms were of train travel.  He responded in a heartbeat with a sentence that I had to write down:  “Each trip,” he said, “is a micro sociological experiment in its own right in that a host of disparate elements are tossed together in one sense, against their will.”

When I said, “What?” he simply replied, with a grin, “’Tis phantasmagorical.”

Republicans in Congress have another word for it. For years Amtrak's budget has been a favorite target, which is at least one reason why, as charming as it is, our national rail system will never be in the same league as the ones in Europe or Japan, with some trains having the potential to reach speeds of over 300 miles per hour. Amtrak doesn’t even own most of the rails its trains travel upon; it leases them, which is why freight trains, especially in places like the Bakken oil shale along the route of the Empire Builder in North Dakota, take priority over passenger trains.  If anyone wants a portrait of the country we have built in the last quarter-century, one need look no further than the fact that in America, trains bearing pig iron take precedence over ones bearing people.

Looking at America’s rail system simply as a means of transportation is short-sighted, though.  We should think of these trains as national treasures, no less valuable or rich in tradition than the Grand Canyon or Yellowstone.  On the Zephyr, we crossed the Sierras via the Donner Pass, and down below us was Donner Lake, where those poor souls suffered the horrors of the winter of 1846-47.  As we entered the tunnel through the mountain — a tunnel that would have come in very handy to those trapped settlers — it struck me that it is a wonder that any of us, except for Native Americans, are here at all.

The Golden Spike was driven into the roadbed on May 10, 1869, creating the first Transcontinental Railroad, and opening up the West. And while passenger trains no longer traverse Promontory Summit in Utah, the Golden Spike, and the railroad it created, remains fundamental to our sense of American identity. Utah, in designing its state quarter, put the spike at its center. It’s the place where East met West, and in one sense, America — then only four years after the end of its terrible Civil War — became one country.

The trains are still bringing people together. It gave that girl I met a chance to rejoin her family after seven years. It will bring hundreds of thousands of people to holiday suppers in the next month. It even enabled me, a transgender woman from Maine,  to eat French toast with a couple of Dunkers from Indiana.

We switched from Daylight Savings Time back to Standard one Sunday morning, on the same night that we crossed from Eastern time to Central, with the result that for a while no one seemed certain what time it was at all. Had we lost one hour? Two? It wasn’t clear. A few days later, I found myself awake at 4:30 a.m. Mountain time, sitting in the domed observation car of the Zephyr, writing the climactic scene of my novel.

As I worked, I saw the skies slowly turn pink, then orange. As the dawn came up a woman next to me began to sing, “Here Comes the Sun.”  For a while we sat there, strangers in the morning light, singing that song together.

Jennifer Finney Boylan is professor of English at Colby College in Maine. Her most recent book is "I'm Looking Through You: Growing Up Haunted."