"Everyone caved": How much of the "Interview" fiasco is actually Hollywood's fault?

Celebrities are slamming Hollywood for pulling the film. But the real story is far weirder and more complicated 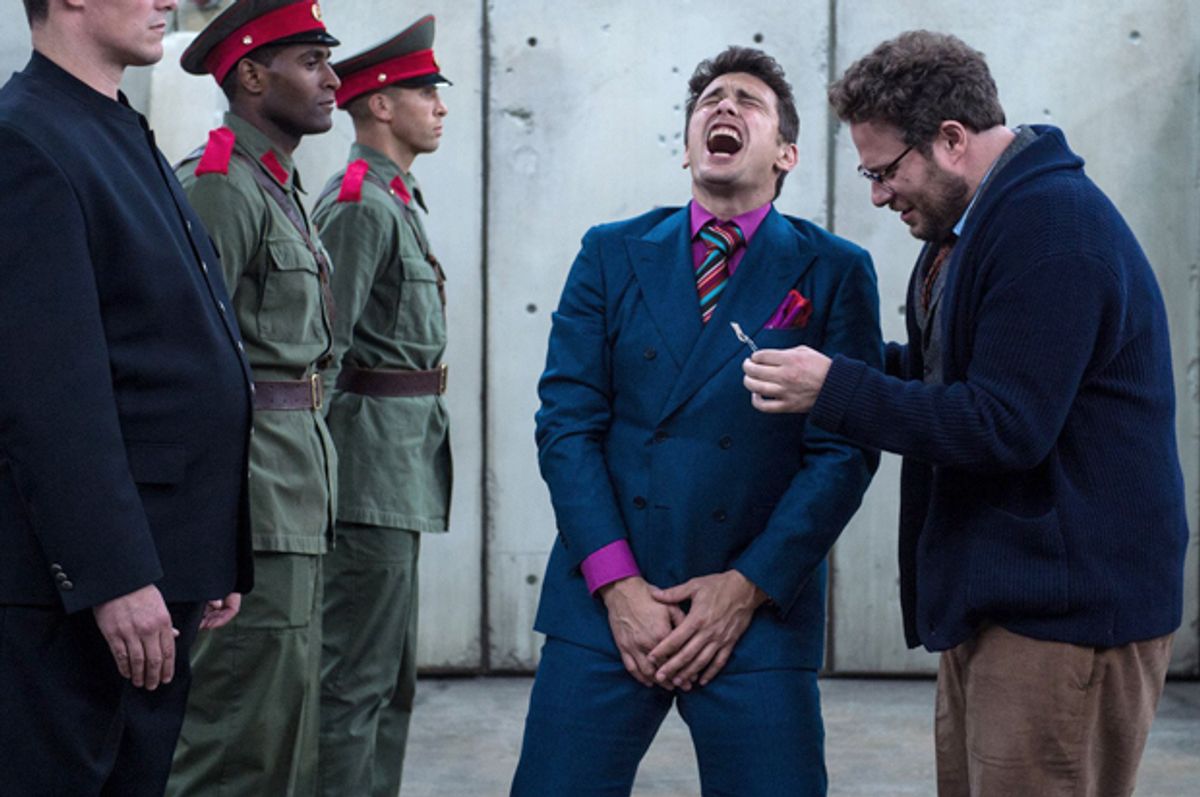 Emotions seem to be riding high in Hollywood following Sony’s decision to pull the Seth Rogen/James Franco assassination comedy “The Interview,” with objections to Sony’s decision clocking in at the highest moral levels. Aaron Sorkin says “the U.S. succumbed to an unprecedented attack on our most cherished, bedrock principle of free speech” while Steve Carell, whose own North Korea-based film project has been tabled, too, mourned the principles of the First Amendment.

There’s plenty of anger and disappointment lobbed at Sony, too. Rob Lowe, who marveled yesterday on Twitter that “everyone caved,” likened the move to the disastrous foreign policy approach of appeasing Hitler during his rise to power in Europe.

Saw @Sethrogen at JFK. Both of us have never seen or heard of anything like this. Hollywood has done Neville Chamberlain proud today.

But emails published by the Daily Beast yesterday show that misjudgments fall not only on the shoulders of Sony’s Michael Lynton and Amy Pascal, who ultimately allowed the project to go forward, but possibly on analysts and government officials who might have misjudged the threat the Seth Rogen/James Franco comedy posed to Sony.

Bruce Bennett, a senior defense analyst at the RAND Corp. who specializes in North Korea, screened a rough cut of the film and emailed his support for the version that ends with Kim Jong-un’s assassination to Lynton on June 25, telling him that “the assassination of Kim Jong-Un is the most likely path to a collapse of the North Korean government. Thus while toning down the ending may reduce the North Korean response, I believe that a story that talks about the removal of the Kim family regime and the creation of a new government by the North Korean people (well, at least the elites) will start some real thinking in South Korea and, I believe, in the North once the DVD leaks into the North (which it almost certainly will). So from a personal perspective, I would personally prefer to leave the ending alone.”

Lynton replied, saying he spoke with “someone very senior in State (confidentially)” who agreed with Bennett. Bennett followed up the next day in an email to Lynton saying Robert King, the U.S. special envoy for North Korea human rights issues, weighed in to him on North Korea’s “act of war” threats, saying that King’s office “decided that this is typical North Korean bullying, likely without follow-up, but you never know with North Korea. Thus, he did not appear worried and clearly wanted to leave any decisions up to Sony."

And yet emails suggest Sony execs remained nervous about the film’s content, especially the ending. On July 9, Lynton wrote to Pascal, “we cannot be cute here,” saying they could work with “no melting face and actually not seeing [Kim Jong-un] die. A look of horror as the fire approaches is probably what we need.” Rogen, while willing to play ball, appears reluctant to completely scuttle the visuals in this Sept. 25 email to Pascal: “There are currently four burn marks on his face. We will take out three of them, leaving only one. We reduce the flaming hair by 50% … The head explosion can’t be more obscured than it is because we honestly feel that if it’s any more obscured you won’t be able to tell its exploding and the joke won’t work.”

Lynton and Pascal ultimately allowed the film’s ending despite their misgivings and despite the industry’s general reluctance (see Sacha Baron Cohen’s “The Dictator,” a Gadhafi-style fictional tyrant leading a made-up country) to directly provoke volatile dictators in the first place. They had a lot of money wrapped up in the project, after all, and Sony's job is to make entertainments that make money. And Rogen? He just wanted to keep his joke. But if Bennett's assessment is that “The Interview” could be useful as a piece of anti-Kim Jong-un propaganda, and if Lynton’s senior State Department official actually agreed, it suggests that the experts Lynton and his team relied on to help them accurately assess threats didn't get it right. So Hollywood's taking all the heat — first for apparently provoking North Korea's wrath, and now for not properly safeguarding America’s freedoms. Sony execs capitulated to poorly translated terrorist threats and demands from mysterious hackers who have already demonstrated that they can undermine the company’s power through death by a thousand tiny cuts. But they didn’t get there alone.