On the "Report"s last night on the air, the legendary host gave a hilarious, moving coda to his career as "Colbert" 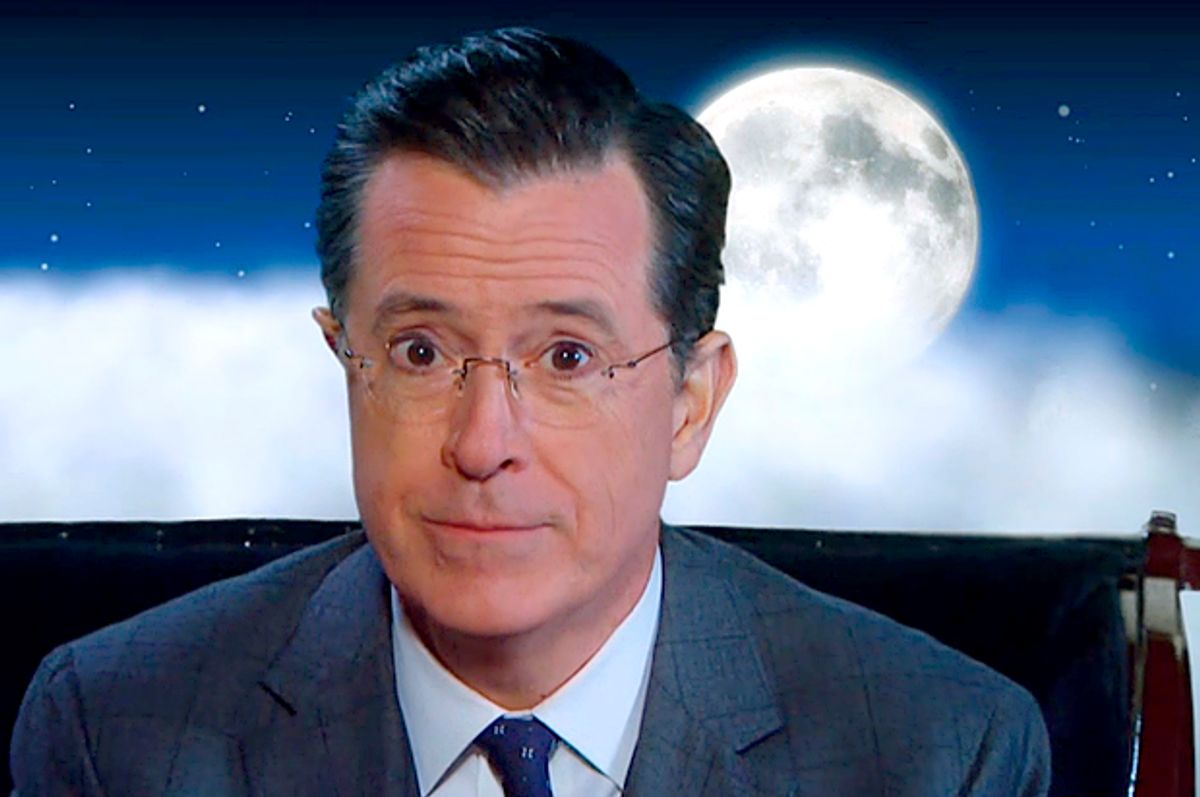 Those were the last words of the last episode of “The Colbert Report,” a delightful, zany half-hour that had to do the hard work of saying goodbye to one of the oddest creations on television. “The Colbert Report” was a fake-news late-night show on a comedy network that leaned hard left by pretending to lean hard right; try explaining that to anyone in 20 years, and see where it gets you. The final words seemed to be a nod to the ephemeral nature of the show—Stephen Colbert, a character played by a comedian named Stephen Colbert, floated away to eternity, guided by Santa Claus, unicorn Abraham Lincoln, and, obviously, Alex Trebek (the man with all the answers; every answer is a question).

And with his last word he tossed the ball back to Jon Stewart, the guy who ran the show that Colbert spawned from, the guy who will be holding down the fort after the real Colbert moves on to CBS. And after Jon Stewart himself said goodnight to the audience, the episode cut to an exchange between the two from June 3, 2010—probably an outtake—with a rare occurrence indeed. Stephen Colbert broke character. Stewart asks: “Hey Stephen, what are you doing?” Colbert responds: “I’m getting angry at liberals,” a grin cracking his face.

It felt like a perfectly fitting coda. Whoever or whatever “The Late Show With Stephen Colbert” will be hosted by, it will not be “The Colbert Report”’s Stephen Colbert, the one who presented to Congress and spoke at the White House Correspondents’ Association dinner in flawless, pitch-perfect character. Unless CBS and mainstream American audiences are in for the craziest long-con prank in history, Stephen Colbert will no longer be America’s most conservative superhero, but a guy who talks to celebrities about upcoming movies and does a minutes-long stand-up introduction to the show. Colbert being okay, he’ll find a way to make it interesting—and, in all likelihood, sneakily liberal—but look, it’s not going to be this. It’s not going to be Stephen Colbert acting out lightning striking him and making him immortal; it’s not going to be dozens if not hundreds of former guests on the show gathering into a small Comedy Central studio to sing “We’ll Meet Again”—which, incidentally, also plays over the end of “Dr. Strangelove.” Vox made a list of the guests that returned: There were a lot, including Kareem Abdul-Jabbar, Bryan Cranston, Patrick Stewart, Bill Clinton (!), Arianna Huffington, Katie Couric, Cyndi Lauper, Jeff Daniels, Sam Waterston, and oh, yeah, Cookie Monster. Finales of beloved shows are typically terrible; “The Colbert Report” found a way to go out in an over-the-top style that felt true to the show’s batty humor.

Because that’s the thing: “Colbert Report” wasn’t always a bona fide hit; it wasn’t always something people got. The intensely performative character Colbert was playing didn’t sit right with everyone; the joke required so much work by the audience that studies discovered that conservatives thought Colbert was being perfectly sincere. There are a lot of late-night hosts in the world, and a lot of them assume a personality that’s made just for the camera. Colbert took that so far—and made it so political—that he’s been intense character for a literal decade, bringing that persona to the real world over and over again, revealing politics as performance, news as splashy fiction, and history as farce, and he did it while making us laugh, too.

The most poignant moment of the show, though, was not when Colbert said goodbye and passed the torch back to Jon; it was not when he gazed into the eyes of Alex Trebek to discover the mysteries of the universe; it was not even when the Grim Reaper fell to the ground, slain, as Colbert absorbed his infernal, immortal power. It was during Colbert’s “The Word,” the show’s satirical, clapping-back response to Bill O’Reilly’s “No Spin Zone” on “The O’Reilly Factor.” Colbert being Colbert (playing Colbert, acting Colbert, leaving Colbert), he started discussing his legacy in his own show, simultaneously patting himself on the back for having made a difference and skewering himself for having had no effect whatsoever. But then he pointed to recent news: A Bush governor is running for office. America’s sending troops to Iraq. “I did something much harder than change the world. I samed the world… not that much has changed.”

I can’t totally agree with Colbert there—after all, now we have Facebook!—but it’s hard to deny the stubborn persistence of the status quo. Even after 10 long years of poking holes in it, it’s still going strong. And if we might argue that Colbert created a revolution? Well: “One revolution is 360 degrees back to where we were.” Good, I left my keys there, added the text on-screen.

It’s hard to wake up every day and try to change the world. Stephen Colbert has a set of talents that he could deploy with devastating effect, and he decided to use them for making the world funnier and saner. It might not have been as revolutionary as his fans hoped; it might not have much of a shelf life, either. Colbert said, alternately, at different points in his final episode: “That was fun!” and “What a waste!” But right before he became immortal with a bolt of stray electricity from the heavens, he said to the audience, his fans, and Colbert Nation: “If I could do it again, I’d do it with you.” Maybe that’s world-saming, not world-changing. But if Stephen Colbert, the entertainer, is moving on to “The Late Show,” Stephen Colbert, the conservative American superhero, is living on forever in a sleigh on the way to the moon. Just like Lincoln, Santa, and Alex Trebek, he’ll be back whenever the American people needs him—and until then, he’s always in our hearts, if we just "close our eyes, and believe."