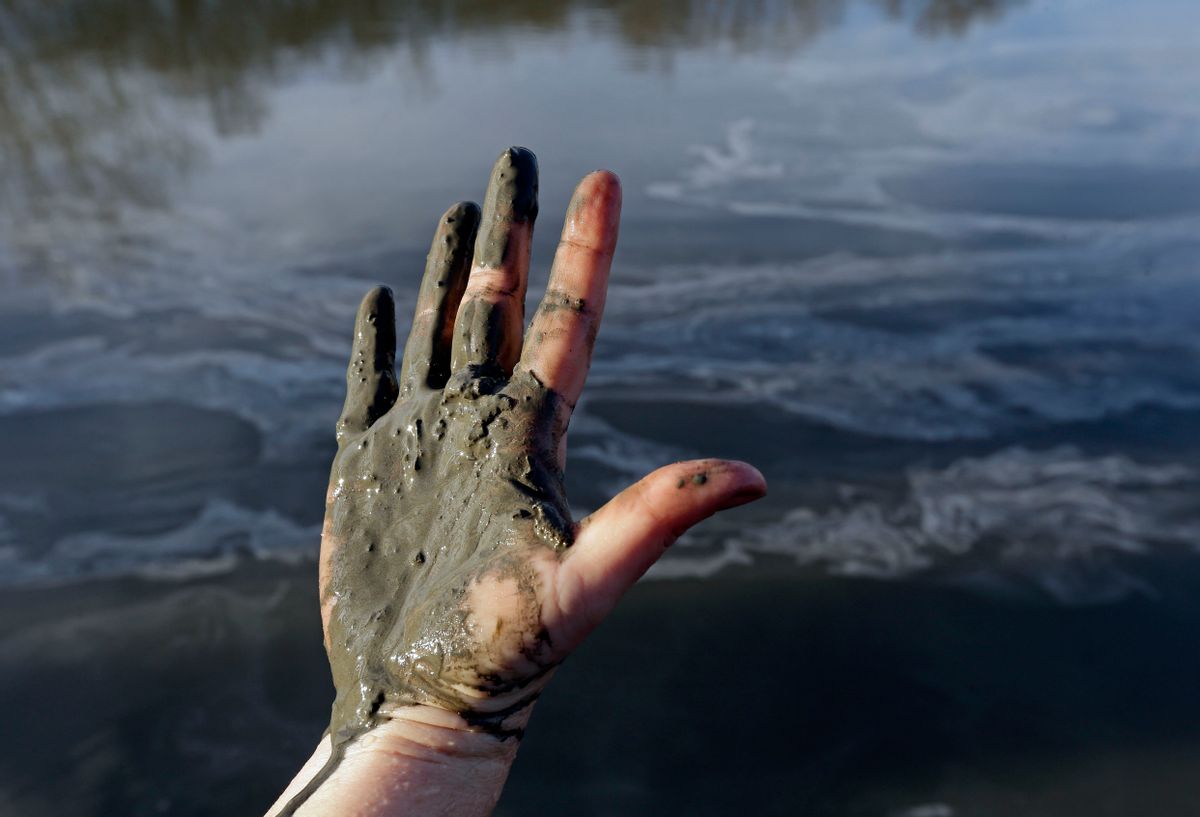 FILE - In this Feb. 5, 2014 file photo, Amy Adams, North Carolina campaign coordinator with Appalachian Voices, shows her hand covered with wet coal ash from the Dan River swirling in the background as state and federal environmental officials continued their investigations of a spill of coal ash into the river in Danville, Va. (AP/Gerry Broome)
--

The Environmental Protection Agency announced the nation's very first regulations for coal ash disposal Friday afternoon. But, in a major disappointment to those hoping the agency would come down hard on the substance, it opted to regulate it as solid, instead of hazardous, waste.

Coal ash is a byproduct of coal-fired power plants -- one that's less well-known than carbon dioxide emissions, but is also far more prevalent than many likely realize. It's the second-largest form of waste generated in the U.S., the 140 tons of it that are produced annually stored at over 2,000 disposal sites across the country.

Some of those dump sites have been known to leak contaminants, which include arsenic, mercury and dangerous heavy metals, posing a health risk to the people living nearby. And sometimes things go really wrong. You may remember, for example, the disaster earlier this year in North Carolina, when Duke Energy spilled over 82,000 tons of the stuff into the Dan River. This is how the AP described the spill's impact in the days following:

An Associated Press reporter canoed downstream of the spill at the Dan River Steam Station and saw gray sludge several inches deep, coating the riverbank for more than two miles. The Dan had crested overnight, leaving a distinctive gray line that contrasted with the brown bank like a dirty ring on a bathtub.

Williams, a program manager with the Dan River Basin Association, worried that the extent of the damage might not be fully understood for years.

"How do you clean this up?" he said, shaking his head as he churned up the ash with his paddle. "Dredge the whole river bottom for miles? You can't clean this up. It's going to go up the food chain, from the filter feeders, to the fish, to the otters and birds and people. Everything in the ecosystem of a river is connected."

The Washington Post has an overview of other notable coal ash disasters: the worst-ever which occurred back in 2008, in Kingston, Tennessee, and spilled over one billion gallons of sludge. The EPA's own review identified 132 instances in which coal ash damaged rivers, streams and lakes, along with 123 cases where it tainted underground water sources.

“EPA is taking action to protect our communities from the risk of mismanaged coal ash disposal units, and putting in place safeguards to help prevent the next catastrophic coal ash impoundment failure, which can cost millions for local businesses, communities and states,” EPA Administrator Gina McCarthy said in a statement accompanying the announcement.

The question is whether that action is strong enough to prevent those catastrophes, and the answer would appear to be a resounding "no." Were coal ash to be regulated as hazardous waste, the federal government would have been put in charge of enforcing the way it's stored. Instead, the EPA's rule leaves the onus of that burden on citizens and states. And while more analysis is certain to come on the regulations that will be put into place once critics have a chance to fully digest the rules, this stands out as a serious disappointment.

Water Keeper Alliance was out first with their statement in anticipation of the news: "EPA’s historic failure to regulate coal ash has resulted in catastrophes that have buried homes in poisonous slurry and permanently harmed rivers and stream," the environmental group said. "How could EPA conclude that coal ash, which is loaded with carcinogens including arsenic, cadmium, and chromium, is not a hazardous waste?"

“While EPA and the Obama Administration have taken a modest first step by introducing some protections on the disposal of coal ash, they do not go far enough to protect families from this toxic pollution," said Mary Anne Hitt, director of Sierra Club’s Beyond Coal Campaign. "We welcome federal efforts on this issue, but Sierra Club has significant concerns about what has been omitted from these protections and how they will be enforced in states that have historically had poor track records on coal ash disposal."

An even greater irony, the Daily Kos points out, is that weak as they are, the Senate's new anti-environmentalist, James Inhofe, is sure to attack the new regulations anyway. Ignoring history the same way he ignores climate science, Inhofe said that states have “responsibly and effectively managed coal ash” without federal intervention.