Just how far does the principle of a right to bear arms go these days? Here's where gun extremists draw the line 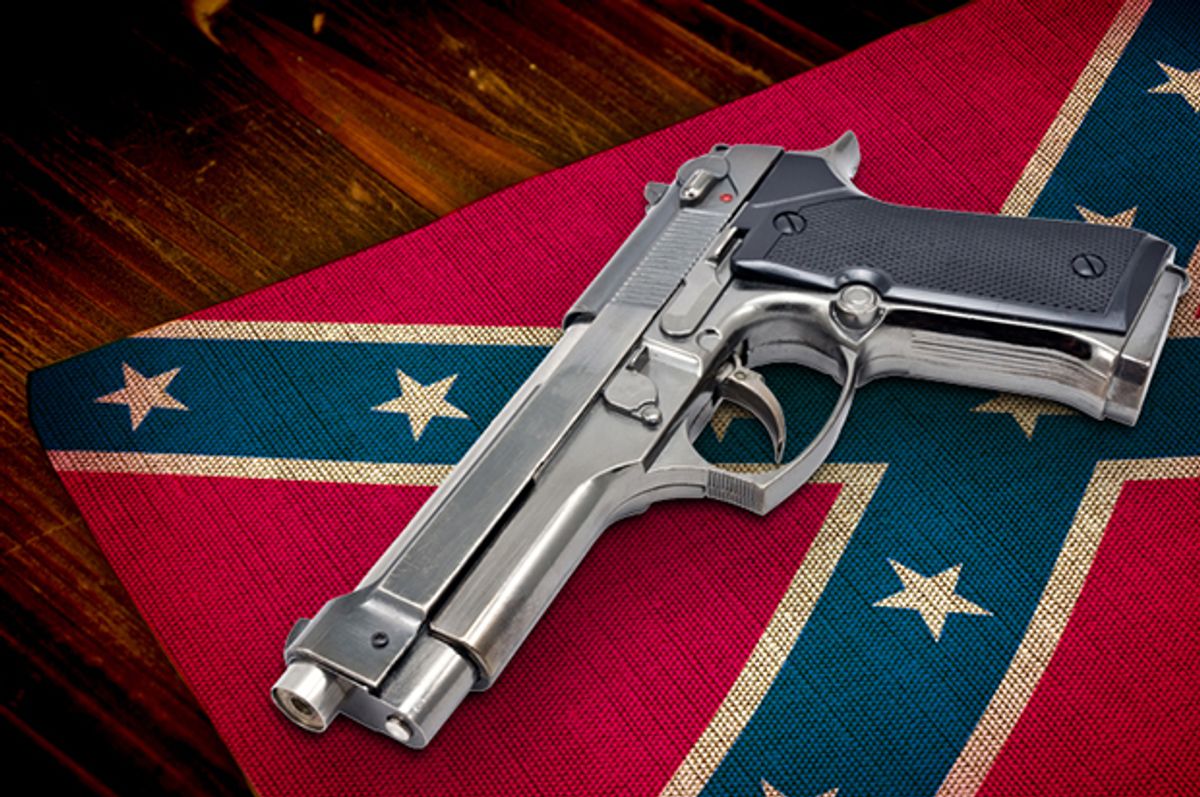 So what do you think the gun proliferation activists would say to a bunch of American Muslims exercising their constitutional right to bear arms on Main Street, USA? That's the question writer and gun owner Jon Stokes asked in this piece at Alloutdoor.com. He wrote:

I’ve been thinking recently about the way that the Satanists are having a field day with so many laws that Christians are passing under the “freedom of religion” banner: stunts like putting a statue of Satan next to the Ten Commandments, or Satanist plans to hand out literature to school kids in Orange County. What if, I wonder, certain groups were to exercise their open carry rights in the same manner.

What if there were a group of Muslim open carry advocates who called themselves “Sword of the Prophet” and whose avowed mission was to bring Sharia law to the U.S., and they took to showing up armed and in large numbers outside of churches on Sunday, the way the OC guys do at the state house. Or what if there were a group of hispanic activist OCers, maybe an offshoot of La Raza who liked to organize armed protests at police stations and court houses, and who openly advocate the “reconquista” of the Southern U.S.?

The question was sincere and he's got good reason to wonder. As he points out, gun rights were pretty well assumed in America until a certain clarifying event took place: the Black Panther Movement. (I wrote about this earlier here.) Then Gov. Ronald Reagan and the boys in Sacramento were none too pleased at the idea of African-American revolutionaries availing themselves of their Second Amendment remedies in the California State House:

[T]he story goes that in 1967, Gov. Ronald Reagan agreed to sign a California gun control law that made it against the law to walk around in public with a loaded gun after he saw a Black Panther rally... Black Panther Bobby Seale was interviewed about it later and verified that Reagan was there that day...

It’s certainly possible that Reagan was motivated by that rally. But there was a lot of unrest in America in those days and gun control was not a right-left issue then — even the NRA was for it.

(If you'd like to see an impassioned defense of the right to bear arms, watch this video. Wayne LaPierre sounds like a 5-year-old by comparison.)

Anyway, it wasn't that long ago that the idea of armed Black Panthers roaming the streets with revolutionary zeal was enough to scare the heck out of people who otherwise would be pumping their fists in solidarity with the anti-government revolutionaries and cause them to withdraw their support for unfettered gun rights. But that was then and this is now. The world has changed and the gun rights activism has matured into a full-fledged movement. It's more philosophically and ideologically based than it was before, largely as a result of some very conscious moves by gun enthusiasts to make it that way. But just how far does the principle of a right to bear arms go these days?

First: Open Carry advocates are trying to get back to common sense and common law. They don't want the government to have sole control of Force. And the reason for their open carry is purely for legitimate law abiding purposes. Namely self defense.

Now contrast that with: Muslims whose GOAL is to implement Sharia Law in the US. Okay...that right there is basically a declaration of war. Or how about: La Raza: Let's reconquer the Southwest region of the US. Again, fightin' words.

As far as the Black Panthers? Didn't need to be a race issue about "black people carrying guns". The issue was that they were carrying them in a threatening manner, not in a rational, law abiding, for self defense civil manner. And once again, the route chosen was to restrict or ban the open carrying of guns rather than just tool up and fight fire with fire. If I see threatening people carrying weapons in my neighborhood I'm not going to go cry to the government to take their guns away I'm going to pack heat myself and encourage my neighbors to also do the same. Then we'll see if the armed thugs are serious or not.

Evidently, individuals are allowed the unfettered right to bear arms as long as other individuals who believe in an unfettered right to bear arms agree with that individual's motives for wanting to bear arms. It all depends, you see, on whether you are bearing your arms in a "rational, law abiding" manner. It is up to each individual to determine what that behavior looks like and if they aren't happy about it, they will evidently start bearing arms in a threatening manner to "see if the armed thugs are serious or not."

In fairness, there were a number of comments that said "it doesn't matter, Muslims have the same right to bear arms as anyone else." Under their principle, this should be the obvious answer.  But there were quite a few who made the point that what determines a person's right to bear arms is intent and if your intention is to challenge the U.S. Government you shouldn't be allowed to bear arms. Unless, of course, you are a fine upstanding gun rights activist who believes that the Second Amendment exists so that citizens can .... challenge the U.S. Government.