Stephen Colbert's greatest hits: Our favorite moments from 9 years of "The Colbert Report"

"The Colbert Report" ends its nine-year run tonight. Here's a look back at some of its most amazing segments 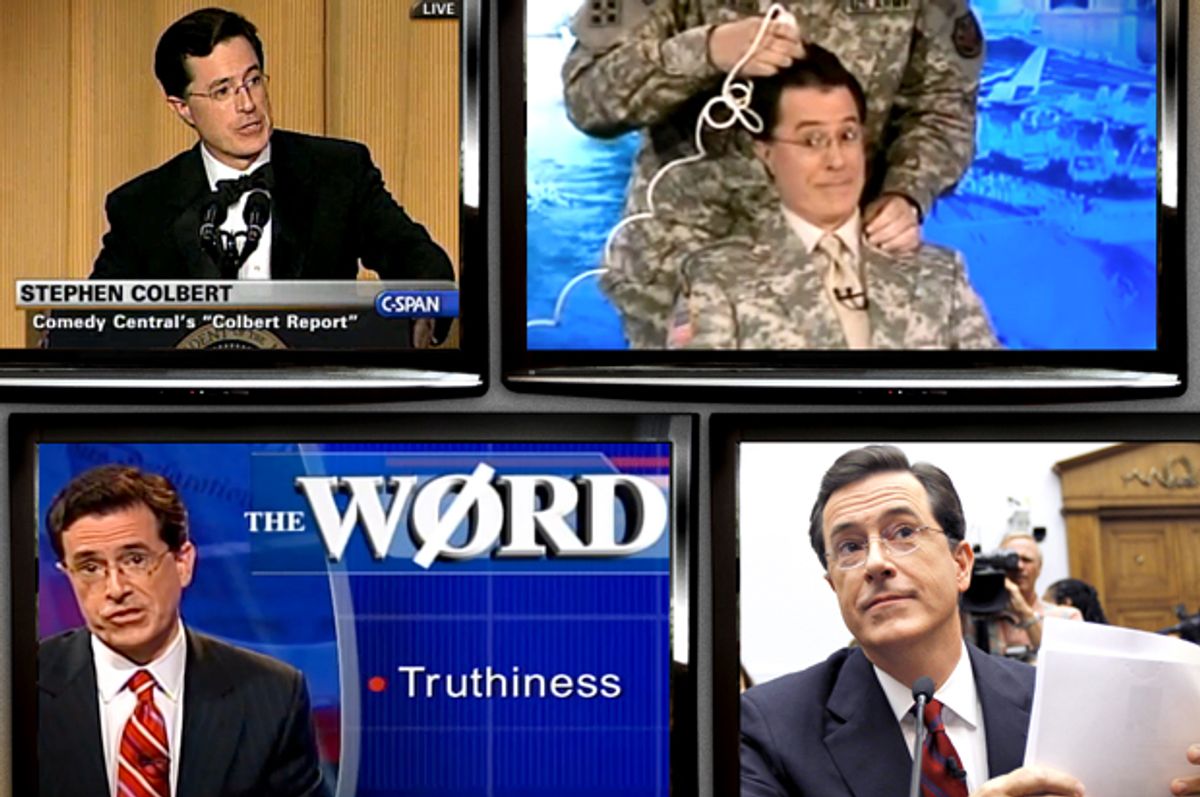 Tonight marks the final episode of "The Colbert Report." If you're anything like us, you're finding this to be a difficult pill to swallow.

Sure, Colbert isn't leaving TV altogether — he will, of course, be taking over "The Late Show" in 2015 — but his satirical news program was something special. Irreplaceable, even. And that ends tonight. While the Colbert Nation lives on, this remains the end of an era.

"The Colbert Report" was a comedy show that defied all expectations from its very first episode. It cast a harsh (and hilarious) light on places as far removed as Washington and Iraq; and translated even the most ludicrous and labyrinthine political concepts into comedy gold. (See: super PACs.) Colbert has been so good, and so often, that trying to identify the best from a nine-year body of exceptional work is basically impossible. Of course, that didn't stop us from trying.

So, without further ado, the best of Stephen Colbert:

Let's start with this 2013 segment — identified by some as "the best segment ever" — which focuses on a small-town Kentucky mayor, who happens to be gay, and the landmark ordinance he passed to end discrimination based on sexual orientation:

Stephen Colbert's blowhard conservative persona was famously modeled after Fox News host Bill O'Reilly. The two have had an amicable, but sometimes testy, relationship over the years. Below is the first in a series of interviews between the two:

But Colbert's interviews — and among them there are more than a few classics — weren't just about political point-making. Here's one of his best ever, with the beloved late children's author Maurice Sendak:

In 2009, Colbert took "The Report" to Iraq, doing four shows from the Camp Victory military base. And, appearing via satellite, President Obama made sure that Colbert got the full armed-forces experience — by mandating an on-air buzzcut.

Over the years, Colbert has brought a new type of transparency to Congress in an amazing series of segments called "Better Know a District." In this classic installment, Colbert sat down with Rep. Robert Wexler from Florida's 19th District. Hilarity ensued:

And here is another classic, just for good measure: "Better Know a District" with Rep. Barney Frank.

Remember the time Colbert did his civic duty by testifying before Congress on the subject of immigration? There weren't many laughs in the room that day, but that shouldn't stop you from chuckling now:

And speaking of public service, "The Colbert Report" won a Peabody Award for its many segments on super PACs, helping to elucidate the formerly obscure and complex subject of political dark money. Here's a classic moment from that coverage:

This 2011 segment on Planned Parenthood nicely sums up the partisan rancor in Washington:

And for good measure, you should rewatch Colbert's 2006 speech at the White House Correspondents' Dinner, a roast of President George W. Bush that was by turns hilarious and brutal — and perhaps the most politically salient moment of his career.

And we end this fine list with a look at one of his first segments ever, the birth of "truthiness":