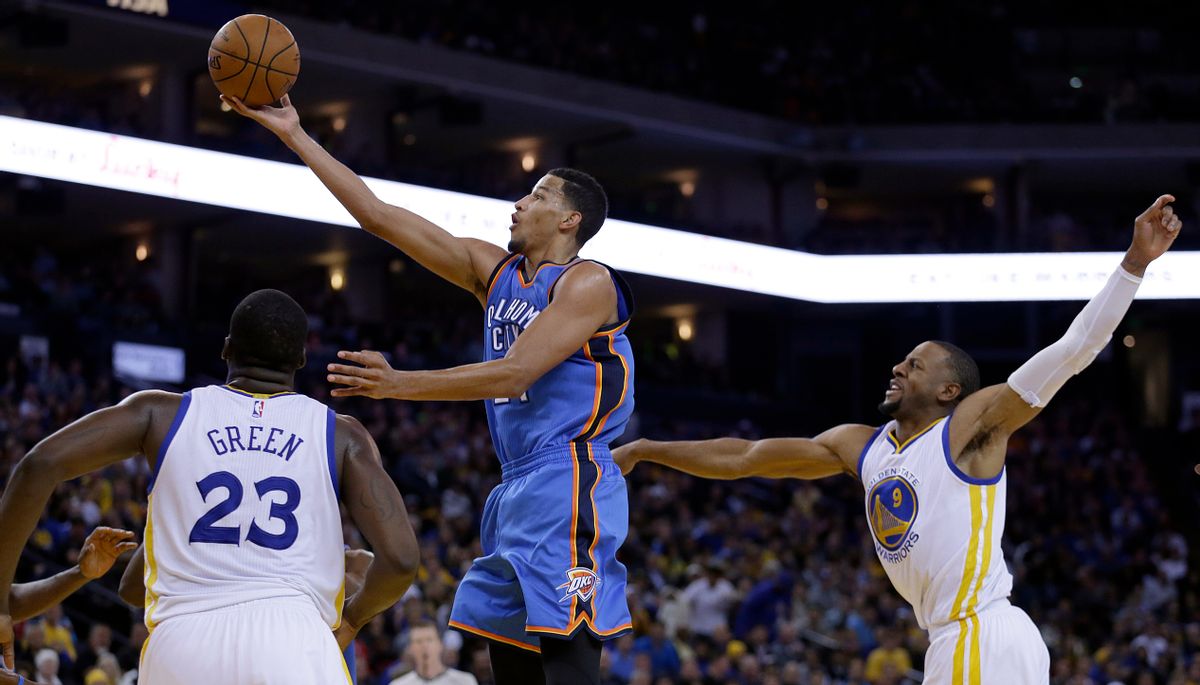 OAKLAND, Calif. (AP) — Golden State Warriors coach Steve Kerr could only shake his head and grin while Kevin Durant put on the best performance of his young season in the first half.

Kerr and the Warriors were a lot happier they didn't have to deal with Durant in the second half.

Stephen Curry had 34 points and nine assists, and the Warriors rallied from an early 17-point deficit to beat Oklahoma City 114-109 on Thursday night after Durant left with a sprained right ankle.

It was the only way the Warriors could.

Durant scored a season-high 30 points on 10-for-13 shooting in a spectacular first half that ended with him stepping on Marreese Speights' foot. Durant said he had a mild ankle sprain and X-rays were negative.

The reigning NBA MVP said he hopes to play at the Los Angeles Lakers on Friday night but will see how he feels.

"I wanted to play. I wanted go back out there but we wanted to be cautious," Durant said.

Westbrook and Curry traded go-ahead shots in the final minutes until the Warriors put together the deciding run.

Curry hit a pull-up jumper, Draymond Green followed with a putback and Curry connected on a short runner to give Golden State a 110-105 lead with 1:39 remaining.

Reggie Jackson made a layup after a timeout, and Curry came back with a finger roll down the lane. The teams traded scores one more time before Harrison Barnes' fadeaway with 17.3 seconds left put the game out of reach.

Green finished with 16 points, nine rebounds and nine assists, and Barnes had 12 points and seven rebounds as the forwards headed up Golden State's undersized frontcourt.

In a matchup of the NBA's top teams in opponents' field-goal percentage, both opened with an offensive outpouring and never relented over 48 minutes.

Durant made his first six shots, including three 3-pointers, and scored 16 points in the first 6 minutes. The Thunder went ahead by 17 but led just 40-32 at the end of the first quarter.

It was the most points the Warriors had allowed in any quarter this season.

"When he gets going, ain't too much anybody can do," Westbrook said.

Curry came roaring back in the second, hitting one spectacular shot after another, seemingly controlling the crowd's "oohs" and "aahs" on his fingertips.

The Warriors led 65-63 at halftime, which took its toll on both stars. Durant and Curry each limped to the locker room after twisting their ankles in the final minute, though Curry's problem was short-lived.

Durant was called for a charge after stepping on Speights' foot and falling to the floor. He lay on the ground in pain before walking to the bench with the help of teammates Westbrook and Serge Ibaka.

Durant came back Dec. 2 after missing the team's first 17 games with a broken right foot, and his latest injury ended his best performance yet this season. It also was the highest-scoring first half of his career.

The game lost most of its buzz when Durant didn't return, and neither team created much separation in the second half, setting up the tight finish.

Warriors: Kerr said he expects Bogut to be out "the next couple of weeks," while Lee could return next week.

Thompson received the NBA Cares Community Assist Award for November before the game in recognition of his generosity and ongoing charitable efforts in the San Francisco Bay Area community. Curry won the season-long award last season.

Thunder: At the Los Angeles Lakers on Friday.