I was a podcast addict

When I first discovered them, podcasts distracted me from the pain in my life. But then I couldn't stop listening. 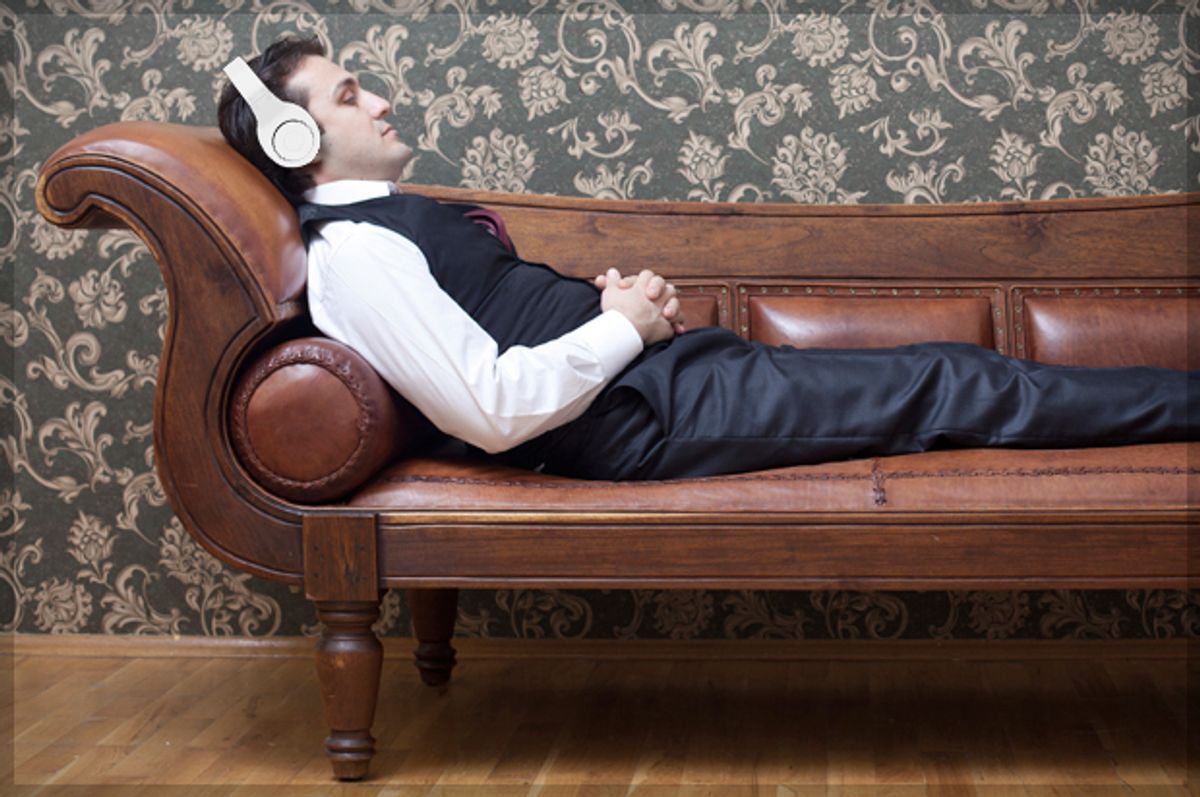 I first discovered podcasts in 2006 with "The Ricky Gervais Show." I remember flying from Dublin to New York and listening to the entire first season without a break. Then, on the way back, I did the same with everyone around me sleeping. I was 19 and my mom was terminally ill.

When she died a year later, I remember getting into bed that night and listening to "The Ricky Gervais Show" again and being able to forget about what had happened until morning, when I was awoken by people coming and going and crying. From the earbuds tangled up in my sheets, I could still hear Gervais’ shrill laughter ringing out, so I popped them back in and, again, life went away.

When things got easier, I listened to sports podcasts. But when I say listened, I don’t mean I downloaded a new episode and then waited a week for the next one. Rather I downloaded the entire back catalog and consumed them all. I’d turned 21 by that point and had met a girl and fallen in love. Thinking back to our first few dates, I recall the walks to meet her being soundtracked by football podcasts from two years prior. None of the games under discussion were relevant.

Clearly listening to them went beyond my interest in sport: Maybe something therapeutic was happening. Or maybe I was self-medicating, blocking out the organic moments of life, which were still sometimes painful, and replacing them with chatter. I told myself that, because everyone was listening to music all the time, augmenting their own realities constantly, that what I was doing was no different, and there was nothing to be worried about. But what I couldn’t admit was that, if the music comparison held true, I was probably more Rob from "High Fidelity" than the average guy listening to Coldplay on his way to work.

Maybe I’m getting ahead of myself here. Back then, podcasts weren’t so much an obstacle to happiness as something I enjoyed along with my girlfriend. When I look back, what I mostly see isn’t someone obsessed with podcasts but someone obsessed with the girl he loved. We still went on dates and day trips; I’d go visit her in college all the time. We would just party. We would be young.

I remember it getting bad in Germany. We had gone there in 2011 for work, and I discovered "WTF with Marc Maron," "The Joe Rogan Experience" and many others. Having no friends, barely able to speak the language and unhappy at my job, it was nice to listen to stuff being spoken about in English by funny, creative people. So every day, riding the tram, I neglected the chance to improve my German by listening to the voices around me. Instead, I hid behind my earbuds, hoping no one would ask what I was smiling at because I could never explain auf Deutsch.

In my slightly better English, I couldn’t either. Though it was mainly just comedians talking, opening up about their dark pasts, I could only experience the feeling that they gave me, that electric jolt that sometimes made it hard to depart the tram and walk those last remaining minutes to work. Life just seemed too much then, so ecstatically brilliant to the point where it felt like it would crush me. So at moments like these I occasionally wouldn’t depart, letting the stop sail by instead.

Germany sucked, then, not because it was Germany, but because it was a life I never imagined myself living. I was 24 – it was still new to me to get up every day and go to work in 20-degree weather. I hadn’t yet submitted to it, and it boggled my mind how anyone could: forty years for someone else’s gain?

To boot, the people I worked with, they knew nothing about me. Though we spent eight hours together every day, we left work not knowing a single thing more about each other. This was life, it seemed, and it was shameful.

So, for a time, podcasts brought me closer to my fellow man. They inserted their guests and hosts into my life and I subsequently, temporarily, felt less alone. These people were successful, I thought, not necessarily in a monetary way, but because, whatever hardships they’d gone through – and those like Maron spoke of many – they could now share them and know that thousands were listening.

To someone trapped in obscurity, this gave me hope. I believed that one day I too could have the same good fortune.

My girlfriend, however, was getting frustrated by how often I had my earbuds in, a set of eyes looking at the ceiling in silence. She was the only thing in my life that I didn’t want to block out, yet in my enthusiasm for this idealized world full of funny, creative people, I’d overlooked that she might not know how strongly I loved her, and that – if the roles were reversed – I would’ve been coming to the same conclusions she was.

In the years since we moved back from Germany, both of us grown sick of our lives there, my obsession failed to diminish. I slept to podcasts, ate to them, everything. I could no longer exist in silence. Life’s natural soundscapes could always be improved.

I was depressed, barely sought help. My new “career” as a writer was in shambles because I couldn’t get published and, suddenly, my girlfriend had to motivate me to do simple things with her, like take her out on dates. Yet, believe it or not, I didn’t feel like I’d disengaged. In fact, because I was listening to so many podcasts, I felt like everything was good, like life was actually as dynamic as the stories I only listened to.

It wasn’t podcasts’ fault that I drew toward them so strongly. Rather, as someone needing escape, I found something that provided it and then just went back to the well too often. I loved the peace that they gave me. The laughter and tears. But when I took the earbuds out six weeks ago and discovered that my girlfriend had left me, what did it matter how Marc Maron’s relationship was with his father, or what kettlebell Joe Rogan was using? My life – my real, actual life – lay in pieces across the floor of the apartment we no longer shared.

My obsession with podcasts was symptomatic of my inability to confront the reality of my life. So often I let my girlfriend worry about stuff like money on her own while I checked out and pressed play. When I finally realized that what I’d been doing had gone on too long, I couldn't recognize who I was.

Maybe it would’ve happened anyway. Maybe I was simply blocking out the slow dissolution of two people too young to be in such a committed relationship, who just wanted more freedom to explore things before they hit 30. But I don’t know. All that time I spent checking out, I can only guess at the significance it came to hold for her. She’d get so mad at me, and though she’d always tell me why when I asked her – that I wasn’t present – I just figured I’d be present later, when I finished another episode of "This American Life."

I’ll always be thankful to podcasts. But today I’ve no choice but to accept that, no matter how daunting, I must begin to make plans for a better, more present future. Who knows what form these plans will take, but surely going to therapy, and learning how to be happier, wouldn’t be a bad idea.

So every night now I get into bed alone and try sleeping in silence. Though hell in the beginning, I knew, as the hours passed, that I needed to hang in there. Having lost the only thing I cared about, I needed to change.

The past few weeks, then, it’s improved. Sleep came easier last night, and lying there before it did – only able to imagine how "Serial" had ended – it seemed like if I took each day at a time, and did what needed to be done, I might someday be able to find not only what I’d lost but some stuff I never had in the first place.

James Nolan is an Irish writer who was also written for Vice. Follow him on Twitter @0jnolan.