From "I Want to Marry Harry" to the entire Lifetime network: The worst TV of 2014

Oh, sure, best-of lists are great. But here’s the television that amazed us with just how bad it was 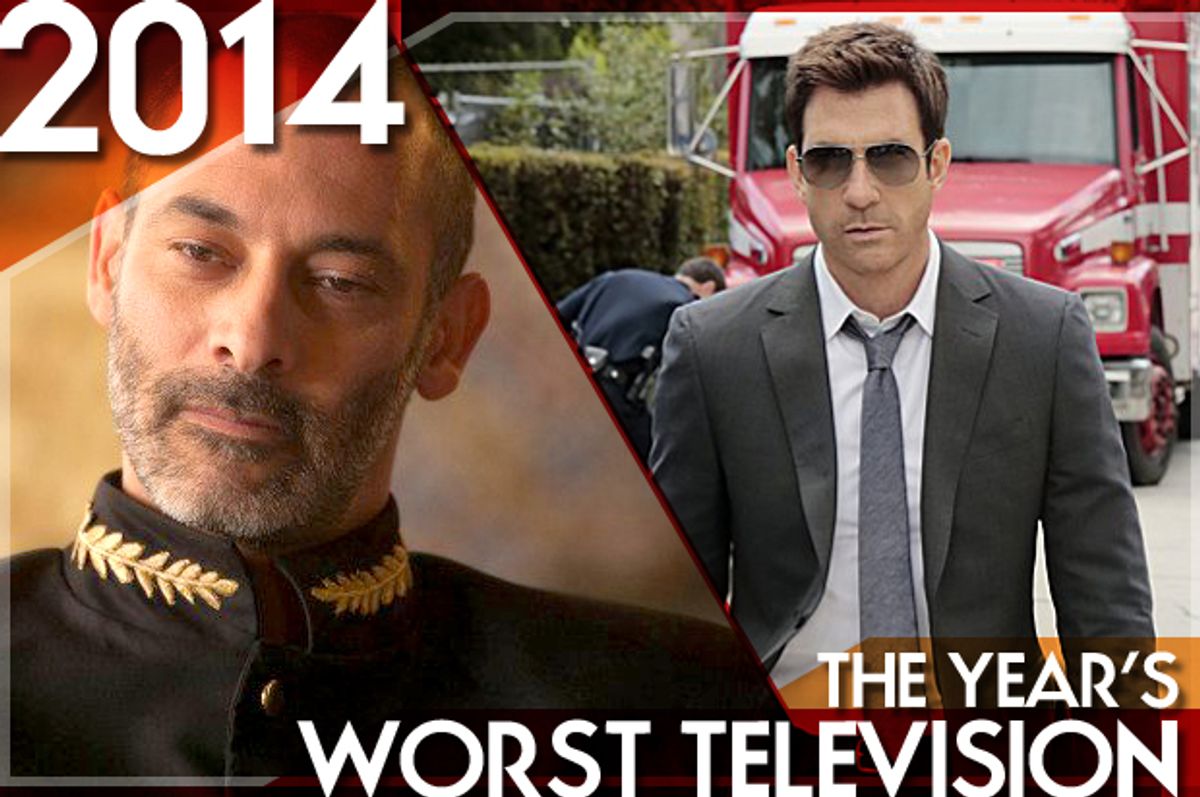 In a world where the rape and murder of women makes for regular prime-time entertainment on prestige dramas and low-budget procedurals alike, it’s hard to imagine that there would be one that even for the violence-desensitized American viewing audience might have been just too much to bear. But then came along this fall’s “Stalker,” from Kevin Williamson, the showrunner that created “The Following” and, er, “Dawson’s Creek,” about the men who stalk women, and how it’s secretly about love! Or something. The first five minutes of the pilot showcased a woman being burned to death in a gasoline fire by a particularly dedicated stalker; the episode then introduced a team of detectives investigating stalking crimes. One, played by Maggie Q, had been clearly traumatized by being stalked. The other, played by Dylan McDermott, was in the process of stalking his own wife and son, and also hit on Maggie Q, because hey, no big deal. “Stalker” could have gone somewhere interesting—maybe that was the plan—but it was eager to exploit its victims for entertainment, first and foremost. Audiences agree: “Stalker,” according to industry expert The Cancellation Bear, is likely to be canceled. We’ll all sleep easier at night.

The production for this prestige drama set in a fictional Middle Eastern country was plagued with problems right from the start: Filming had to shift locations due to unrest in Israel, casting was switched up last-minute, and the original creator dropped out. It would all have been background noise if “Tyrant” had delivered some nuance and commentary, some strong characters and memorable moments. “Tyrant,” instead, was a hot mess. It was plagued by the same formulaic hang-ups that dog “Ray Donovan,” “House of Cards,” “Marco Polo” and the like: A bunch of ingredients that seem like high drama without much of the work needed to create high drama. The worst offense of all was not one, not two, but three rape scenes casually tossed into the pilot, all perpetrated by a man the story seemed to be trying to get some sympathy for. It became difficult to understand if this was “Tyrant” commenting on the way Arab dictators’ sons treat women, or an antihero redemption story, or an opportunity to take some gruesome, vicarious delight in a madman’s spree of debauchery. “Tyrant” will get the chance to try to sell its audience again—the show will return for a second season. Hopefully, this time there will be just a little less rape.

This whole network needs to go back to the drawing board. Aside from old standbys like “Project Runway” and reruns of “Frasier,” the original programming they’re producing is either offensive or just terrible, with very few exceptions. Even Americans—the country that created and unleashed the “Real Housewives” franchise on the planet—balked at the blatant, perplexing racism of “Girlfriend Intervention,” a makeover show where four “sassy” black women found “basics” (sad white ladies) and made them over for the camera. It plays into the worst stereotypes of black people, white people and women, and plays like 21st century Uncle-Tomming. Then there was “True Tori,” the Tori Spelling reality show that was either highly manufactured or just very boring, depending on whom you ask. Plus: “The Lottery,” a show with an interesting premise and terrible execution; the “Saved By the Bell” special, which sucked; “Aaliyah: The Princess of R&B,” which was infuriating; the Brittany Murphy biopic, which angered the deceased star’s family; the preachy “The Choking Game”; the whitewashed, drab “The Red Tent”; and “Grumpy Cat’s Worst Christmas Ever,” whose title turned out to be sadly accurate.

Just remember: 2014 will be marked both by the fact that possible North Korean hackers railroaded the release of a Sony film—and by the memory of this show, where a British guy who looks vaguely like Prince Harry was hired to fool two dozen American girls into competing for his affections. In case there was any doubt as to what the average Hollywood producer thinks of either women or the American people.

In the pantheon of disappointing finales, this one’s got to be the year’s worst (everyone already thought “The Newsroom” was terrible!). After a whole season that took place over just three days, the finale fast-forwarded, killed off a few beloved characters, divorced two of the leads, and concluded a romantic arc that no one cared about anymore. It’s the kind of thing that casts a pallor on the previous nine seasons of the show, and all for a scene with a blue French horn? Hard pass.

5. A surprising amount of HBO

It’s a testament to HBO’s primacy in the prestige television game that most of the shows I find myself wanting to discuss or write about come from the network—the fascinating “True Detective,” the provocative “Girls,” and the lyrical “Olive Kitteridge.” But this year, those fantastic shows are weighed down, on the network, by a collection of poor decisions on specific shows that made HBO synonymous with the worst impulses of clueless white men. “The Newsroom” only had six episodes this year and still found a way to stumble into mansplaining campus rape and the cheesiest, most melodramatic death scene possible in one episode. “Game of Thrones” offered up a rape scene that the director didn’t even understand was a rape scene, adapting the books in a way that baffled fans. And look: “The Leftovers,” outside from two or three fantastic episodes, was a drippy, pointless mess. It had some strong moments, but the season’s structure was a mess, making for a show that was largely bleak and depressing without fully explaining why it was bleak and depressing until the last 30 minutes. The network could be doing way better—it’s proven it can in so many other shows—that when it does stumble, it’s even more disappointing.

Chris Rock is a hilarious stand-up comic. “Saturday Night Live” knows a thing or two about putting on a good show. And yet somehow this episode of "SNL" was a flaming wreck—Rock flubbed his lines, “Weekend Update” fell apart, Leslie Jones had an attack of nerves while staring into the camera, prompting A.V. Club reviewer Dennis Perkins to ask: “There are rehearsals, right?” The low point was this sketch with Jones and Rock, which Uproxx’s Josh Kurp called “the worst sketch of the season.”

It was the wrong musical to choose for an adaptation—no amount of updating could make “Peter Pan” easier to bear. Even updating the song “Ugg-A-Wugg” to be the more politically correct “True Blood Brothers” could not stop that song from being offensive sludge.

It’s not like I had high hopes for the crossover between the mostly offensive Seth MacFarlane show and the mostly tired Matt Groening show—it’s the type of thing that you acknowledge shows kind of have to do at some point. The hour-long crossover was even worse than feared, though—a depressingly unfunny event that revealed the weaknesses for both shows and included the very non-hilarious line, "Your sister's being raped." OK, well, let’s just move on, America.