Ted Hughes on Sylvia Plath: "For the last month I have lived about the strangest life I ever did live"

EXCLUSIVE: An amazing new look inside the courtship -- and early happiness -- of Ted Hughes and Sylvia Plath 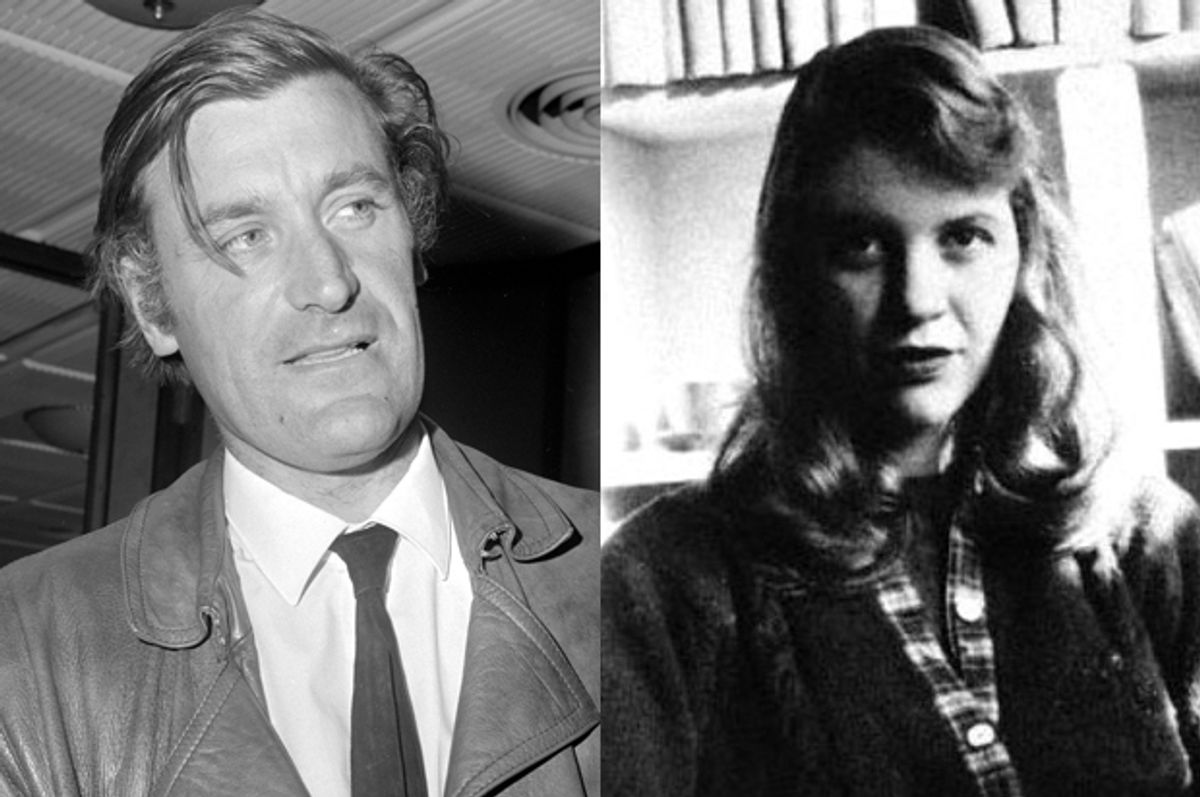 Excerpted from "Ted and I: A Brother's Memoir"

Ted was convinced from an early age that he was going to be a poet, but meeting Sylvia Plath in 1956 intensified his ambitions – and called a halt to his already well-formulated plans to join us in Australia. As he wrote to Olwyn, ‘I have met a first rate American poetess. She is really good. Certainly one of the best female poets I ever read and a damned sight better than the run of good male … for the last month I have lived about the strangest life I ever did live.’

Within four months of meeting Sylvia in Cambridge at a party to launch the magazine St Botolph’s Review, in which Ted had four poems, they were married. I learnt about their impulsive wedding from Ted, whose letter was quickly followed by one from my parents, telling me that he’d brought Sylvia to meet them and how lovely and intelligent they found her.

From the letters Ted sent me at that time, it is clear just how intoxicated Ted was with Sylvia and she with him. ‘Marriage is my medium,’ he wrote. ‘You have no idea what a happy life Sylvia and I lead.’ Sylvia had already sold and published her poems in the U.S. and had begun to make a name for herself, and though Ted had published a few poems at Cambridge and afterwards, he had not yet reached that stage of recognition. They worked together closely, reading and criticising each other’s works.

Regrettably, I never met Sylvia, but she and Ted wrote to me frequently and at length, so through our letters I was able to keep in close touch with them during their years together, as they were with me, and we felt close. Apart from their letters, they phoned from time to time, describing their plans, thoughts, ambitions and travels.

Ted, not surprisingly, had retained his love of fishing – I’d given him a large, green rod before I left for Australia and though it took a long time, he did eventually manage to get Sylvia to go fishing with him. However, I don’t think it ever excited her as it did him, though Ted said she loved it and had ‘luck’. She certainly shared his intense appreciation of the natural world. ‘We walk out into the country and sit for hours watching things. We sit by the river and watch water-voles and when they come near, Sylvia goes almost unconscious with delight.’

From wherever he and Sylvia lived or travelled in the few years before their children were born and they settled in Devon, Ted wrote me detailed letters. From Wellesley in Massachusetts, where they went in June 1957 to meet Sylvia’s family, travelling through what seemed to Ted like Red Indian country, he wrote about the blackbirds with vivid red flashes on their shoulder, robins ‘as big as thrushes’, jays, fireflies and skunks. Although appreciating the warmth of their hospitality, Ted was clearly overwhelmed by his new American family, the apparent opulence, the social rounds.

From there, it was on to Cape Cod, where Sylvia’s mother had rented a cottage for them as a wedding present and where they planned to have some time to themselves and to write. At first, though, Ted found the cost of the place – $70 a week – inhibiting, even though he wasn’t footing the bill. Cape Cod, he wrote pithily, was a place where ‘the folks bring their families, or businessmen bring other men’s wives’.

There was a ‘black week’ when Sylvia fell into a deep depression and Ted developed a huge abscess on his ear. Fortunately a doctor was found who gave Ted the necessary antibiotics and his ear cleared, as did Sylvia’s mood. They began writing like ‘angels’, Ted actually penning one children’s story a day before breakfast. According to Ted, everyone in the area hunted and fished and drove about loaded with armour and fishing permits, boozing heavily. On Cape Cod, evidently, the deer season lasted only seven days and Ted amusingly reported that during the last season ‘seven deer were shot and seven deer-shooters’.

Like Ted, Sylvia seemed to enjoy writing us long and descriptive letters, and although, as I said earlier, we’d never met – largely because my job had kept me busy – I begun to feel as though I had.

A colourful Christmas card from Sylvia and Ted – sent from Northampton, Massachusetts, where Sylvia was teaching at Smith College – brought in the New Year of 1958:

Two stags leaving gold footprints and a gold sky of snowflakes to say our Merry Christmas to you. My teaching tends to take up most of my time so far – keeping a week ahead of my seventy girls like a fox eluding the panting hounds … Manage to cook a lot now, though, which I love – so Ted and I regale fellow writers and teachers on wine or tea, casseroles, and spaghetti sups, pineapple upside down cakes – my one main way of being creative, unless making up classes on D. H. Lawrence and Dostoevsky could be called remotely that. But come June 1st I’ll be writing again at last, trying to finish my own first book of poems this summer and begin some stories. After a short, dry spell, Ted is producing poems prolifically again and we hope to live and write in Boston next year, away from this grove of academe.

By the time Ted and Sylvia reached Boston in August 1958, a town Ted found ‘very pleasant, very gay’, he was in a philosophical mood, again displaying his concerns about the educational development of our children and a wish to see them. Over the years he would send us children’s books, urging us to read them to Ashley and Brendon and to tell them stories separately so that they, in turn, could then tell them to each other, thus developing their vocabulary and imaginations. He reflected: ‘The most vital factor in a child’s education is the life its parents lead. You make your own life and you make your children’s with it.’ He added: “We are writing children’s books at present – it would be pleasant to try them out on your pair.’

In May 1959 we received a very upbeat letter from Sylvia, outlining their plans for the summer:

We plan to take a camping trip this summer, borrowing my mother’s car, to California and Mexico, through all the big national parks. I am very excited about this, and so is Ted, as we’ve never seen anything west of New York. Then we will go for September and October to this castle artist’s colony in New York State. I won’t have to shop or cook, which will be a wonderful change, although I’ll probably be dying for a homemade cheesecake or fish chowder after a week.

Ted & I have both finished writing books of verse for children & are hoping to sell them here. His is called ‘Meet My Folks’, 8 very funny rhymes about a zany family … My ambition at this point is to get a story in the New Yorker. They have taken two more poems, so this year I have earned over $500 from them, for only 4 poems, which is rare pay.

She wrote affectionately about Ted too, saying he was thriving and more handsome than ever. She had, she wrote, just bought him a red-and-black woolen sweater, in which he looked ‘marvellous’. ‘If he has any faults,’ she continued, ‘they are not shutting the ice box and knotting his clothes up in unknottable balls and hurling them about the floor of the room every evening before retiring. Oh yes, and the occasional black moods where he pretends the cat’s ear is broken or that the air is full of Strontium 90. Other than these minor foibles he is extremely good-natures, thoughtful and almost normal.’

As planned, that summer Ted and Sylvia were off on a tour of the West, the incredible space and wildness of the prairies reminding Ted of the Yorkshire Moors. He was clearly excited by the fact that they were about a hundred miles north of Custer’s Last Stand and near other famous battlegrounds – and no wonder, given his childhood love of Westerns. ‘I think we will stay and try and see the buffalo,’ he wrote.

It was in the very beautiful Yellowstone National Park in Wyoming, which they visited in July 1959 during a ten-day tour of the area, that they had exciting encounters with bears that roamed the camp. The animals paraded themselves quite openly – sometimes with their cubs – sniffing round the rubbish bins at night, looking for food. Ted reported having seen sixty-seven bears in all; one of them actually tore the side window of their car out with its claws in the middle of the night, lifting out Sylvia’s red handbag and opening a tin of biscuits. One unwary woman had evidently been killed, and on hearing this Ted and Sylvia moved further away from the trash cans.

Excerpted from "Ted and I: A Brother's Memoir." Copyright © 2012 by Gerald Hughes. Published by Thomas Dunne Books, a division of St. Martin's Press. Reprinted with permission of the publisher. All rights reserved.