Thomas Frank: First we kill all the diamond-class five-million milers 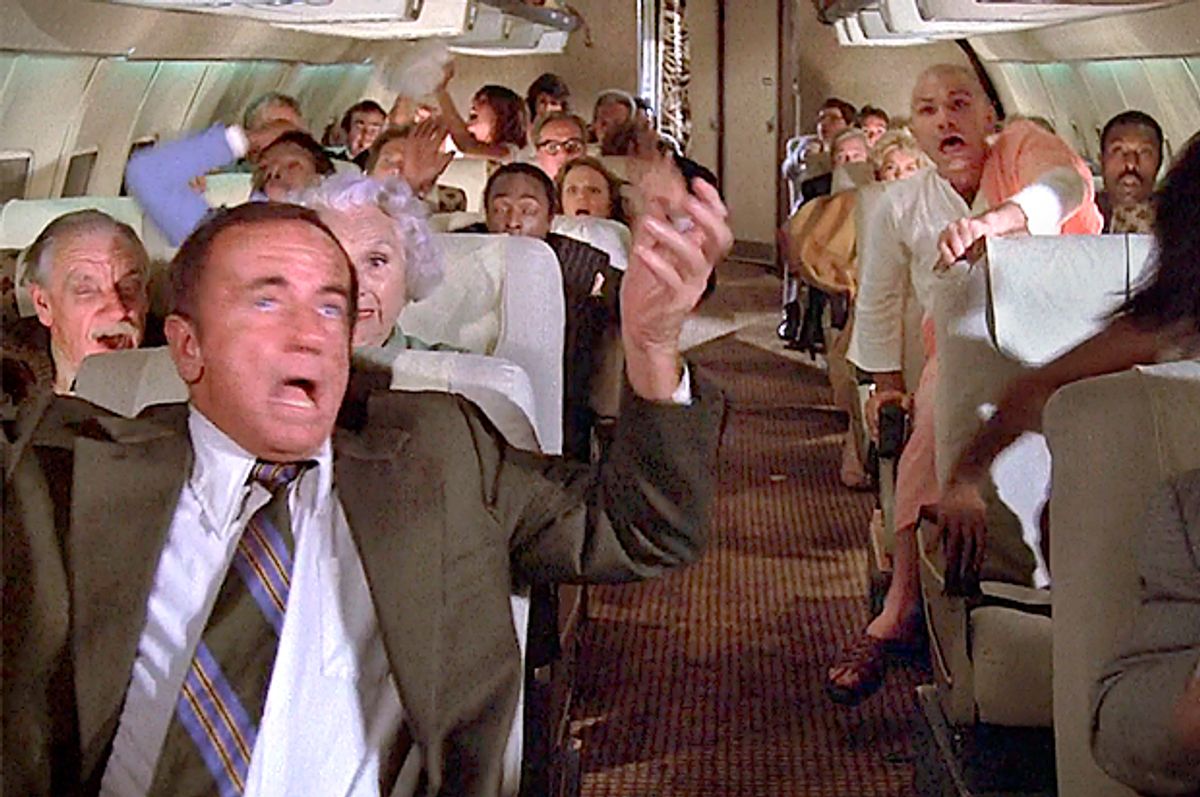 Consider now the airport, the civic trophy through which I passed this morning and where so many of us will spend so much of our time over the next few days. Despite its function, the airport is not a utilitarian but rather a utopian structure, designed (at the high end, anyways) with architectural aspirations that fall somewhere between a World’s Fair pavilion and Chartres cathedral.

The social order in whose merits the airport is intended to instruct us changes from time to time. When it was under construction in the 1930s, Washington’s art deco National Airport was referred to as the “people’s airport,” with all the New Deal connotations one might expect. The landmark structures of air travel’s postwar golden age were monuments to the future with soaring roofs, wings like an enormous bird, and a great circular crown apparently designed to accommodate flying saucers. Unfortunately, that future was indefinitely postponed and its harbingers made obsolete as the airline industry adopted super-sized airplanes, security checkpoints, and an ever-growing number of passengers and flights.

The utopian impulse is still with us, of course; it has merely moved inside. Think of the grand open spaces of the modern airport, with its sweeping curves and colored surfaces and vast walls of light and glass.

The subject of the structure’s optimism has changed as well. Airports are no longer shrines to the majesty of the common man, or even to the magnificence of jet travel. What today’s airport instructs us in are the wonders of globalization. It is a museum of sacred corporate art. From the CNBC-sponsored bookstores selling volumes on innovation and leadership to the institutional ads that decorate the walls of every concourse, what the air passenger absorbs as he walks through these stately spaces are lessons in the glory and the soulfulness of the market-based civilization.

The advertisements I am describing are not really for products per se, although airports have plenty of those, too. What interests me is the solemn philosophical declaration made by godlike corporate beings: announcements of high-minded public concern, noble promises made to a suffering world. “We added technology to strategy,” intones airport ads for Accenture. “You get the multiplier effect.” There are small tots whose mouths hang open at the “brighter world” promised by the Dutch firm DSM. United Technologies tells us how “revolutionary” they are and also how “green” and “empowering,” which are damned fine things to be.

My personal favorite is the series of ads with which IBM once covered the entire length of a big boarding area at what is now called Reagan National Airport. (Maybe they are there to this day.) None of them promoted items that IBM actually sold, but rather Progress itself, what the company calls a “smarter planet.” Each of them made me want to raise my voice in song: “Now every doctor knows you personally,” declared one of them. “Food is now followed from farm to fork,” announced another. And then, on into the realm of the cyber-miraculous: “Drivers now see traffic jams before they happen.” “Now more suitcases find their way home.” And—praise the Lord: “Any child can access a first-class education.” Right down to the mundane, wonders abound in this world that IBM hath made: “Shirts can pick a tie for you.”

The solemn nobility of the business traveler is another common theme in the airport shrine. Ads depict her toiling heroically from unusual locations, thanks to her native industriousness and a little assist from a smartphone or an understanding hotel chain. The airlines themselves are particularly assiduous flatterers of this key demographic, forever reminding the business traveler that the place he has entered is a magical realm of high-tech ease and deep human concern for his every need; that each treasured business traveler is in fact a member of a prestigious association of accomplished professionals, a person of elite status. Excuse me, a person of premier diamond elite medallion status, maybe even a person so exalted that his status must be kept secret from the world. Oh, and how much savvier is he than the clueless folk who travel but once or twice a year and clutter up the gate like a herd of cattle.

What’s more, the airport informs the business traveler, his accomplishments are so magnificent that he deserves to board ahead of others, to sit in special seats, to turn the concierge key and step into the glistening premises of a special secret lounge. It doesn’t stop in the terminal, either, but continues on in the majestic images the airlines make you watch while sitting in the plane, along with the soaring, slowed-down Gershwin music, all of it attesting to how very awesome it all is, and how very much they care.

It would be easy to overlook all this stuff, because we have all been told for years that the airport is the center of the globalized World That Is To Come, and so its transformation into a propaganda experience for big biz is something we sort-of expect. It would be easy to overlook, that is, if it wasn’t for the fact that the airport experience is the opposite of utopian.

Often it is sordid. Sometimes it is downright shitty. You have to hustle because you’re running late. The flight is delayed. It costs twenty minutes and twenty-five dollars to check a bag. Your shoes have to come off. The electrical outlets have all been claimed, and by people who appear to have been lying on the floor for quite some time. There’s a long line at the gate. No room in the overhead compartments. The plane smells of soiled diapers. Your seat turns out to have been designed to accommodate a child and, just for good measure, an argument ensues over whether you may recline it. Why would anyone want to claim this experience by plastering it with ads for their accounting firm? Worse: To claim it by enumerating how they’ve made modern life perfect. It is truly strange, a glaring mismatch between advertisement and content, like a commercial for Sig Sauers running during Dora the Explorer.

And that’s just the perspective from where I sit in kettle class. Now consider the people who actually work in this environment. Do they feel like joining in the hymn to the market system? Well, there are the flight attendants, whose job was once widely thought to be glamorous but who are in fact notoriously overworked and who took a huge hit to their pensions in the big airline restructuring after 9/11.

Matters worsen as you descend from there, taking into account the people who handle the baggage, who help with the wheelchairs, and who mop up the platinum puke in the bathrooms. Years ago, according to a report issued by the Berkeley Labor Center, such work often paid a middle-class salary; today, thanks to outsourcing and other ingenious techniques of wage-suppression, the people who toil at these occupations can expect to spend their lives in a condition of near-poverty. There is a reason residents of SeaTac, Washington, the municipality that surrounds Seattle’s Sea-Tac airport and its several first-class lounges, voted to raise the minimum wage to $15 per hour—and there’s a reason the entity leading the opposition to them was Alaska Airlines.

In truth, not even the million-mile elite at whom all this propaganda is aimed really swallow it. Some of the most caustic and insulting tales you read on frequent-flyer discussion boards concern the snobs at the top of the airport’s great chain of being—dopes who believe the hype and really think they are members of a privileged class because they’ve got a card named for a precious stone. Usually these stories start with something going wrong, with some privileged someone being made to wait or stand in a line usually designated for the rank and file. His every premier-platinum expectation has been aroused and then denied, and he proceeds to take out his impotent frustration on a flight attendant or the person who scans passes at the gate. Eventually, the legend goes, he will fall back on the phrase that seems do be written in the very DNA of every lobbyist and SVP in the land: “Do you know who I am?”

Yes, he is a DYKWIA. An asshole’s asshole.

The business traveler’s contempt for the DYKWIA, I think, is a way of dealing with the fraudulence at the heart of the whole propagandistic enterprise. Contrary to business-class legend, I don’t think there are really all that many poors among the scorned of coach class—with ticket prices what they are these days, those folks are driving or taking the bus to their destination. I suspect there aren’t that many true Point-One Percenters among the airlines’ elite programs, either—those people are taking private jets. And the prestige the platinum pendant enjoys is actually that of a conscientious consumer, a champion collector of green stamps, a hamster who has really made that ol’ wheel spin. The life of the real elite goes on somewhere else.

The truth is that almost no one knows who you are and even fewer care. You may be an emerald coronet five-million miler—and still you have to let some guy from the TSA go through your luggage in the middle of a glorified shopping mall. When you stop to think about it, the architectural pretentiousness of that glorified mall can only amplify the feeling of frustration and alienation: Trying to board a massively overcrowded bus outside a space-age folly that would be more appropriate in Vegas; queuing up in the freezing cold on the curb of a building by Eero Saarinen; finding almost no amenities flight-side in a brutalist structure designed in the days before terrorism; looking for a place to rest in a long and stinky line of chairs, each one staring at the wall in an endless, windowless hallway in DFW that turns out to be in the wrong concourse altogether.

Real luxury is having nothing to do with this at all.