Zoella's fall from grace: Why we demand so much authenticity from our YouTube stars 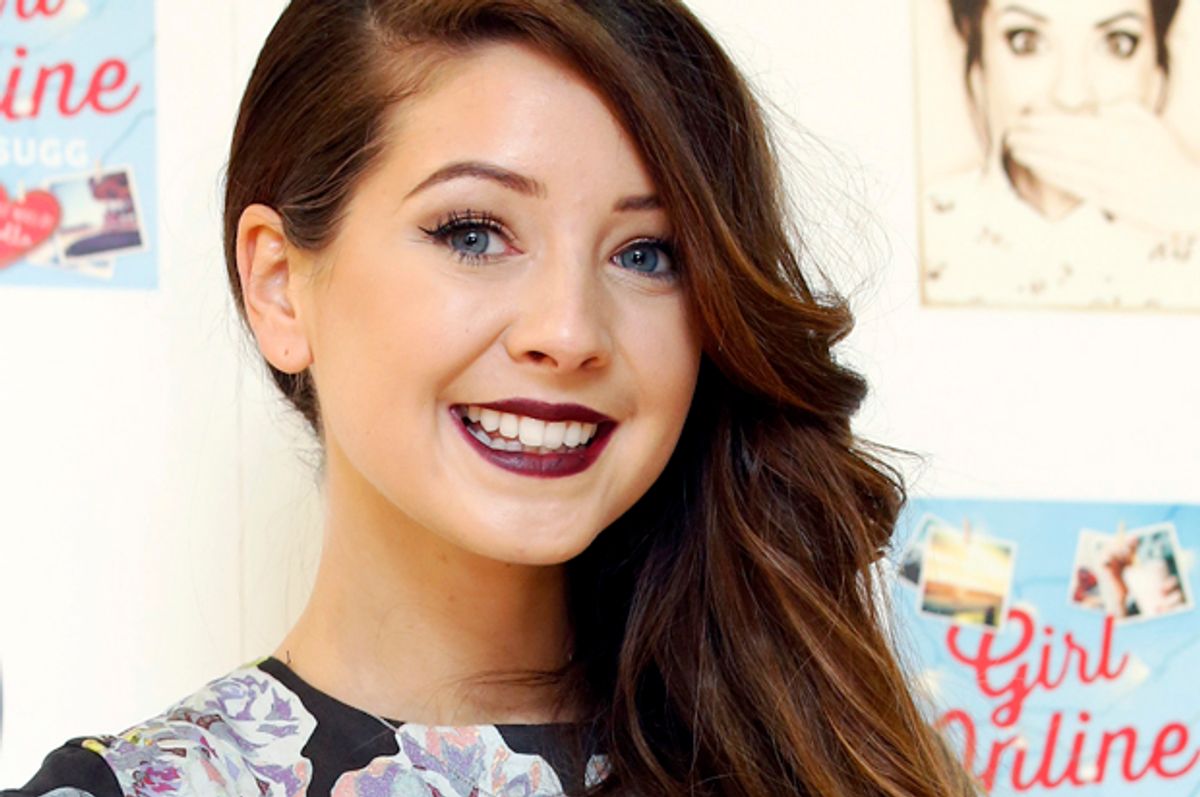 Being a 13-year-old girl is not easy. Your body has begun a series of unsettling, embarrassing and sometimes gory transformations, and you've been pitched into a treacherous new social order where the rules are brutal and unclear. Your fate seems to depend on factors well beyond your control. The shiny, happy, wholesome entertainments once labeled "teenybopper" have long been derided by those who are grown-up and cool, but there's a reason why that stuff is so blandly peppy. Think of it all -- from boy bands to sugary romance manga -- as tranquilizers, the equivalent of the valium prescriptions doled out to desperate housewives in the 1960s, when the truth really hit home.

Sooner or later, however, every girl sobers up. The controversy over the revelation that the British YouTube vlogger Zoe Sugg used a ghostwriter to pen her bestselling first novel captures the whole sorry arc from enchantment to disillusionment. Adults may shrug and observe that most books by celebrities are in fact written by obscure hired scribes, but many Sugg fans are stricken and outraged. They feel betrayed.

Sugg, who goes by the moniker Zoella, amassed a following of millions with short, self-made videos instructing viewers on how to apply cosmetics. The lasting appeal of Zoella, however, lies with Zoella herself, a pretty, dimpled, preternaturally cheerful 24-year old who could still pass for a teenager (if she weren't wearing so much makeup). She recently moved in with her boyfriend, fellow vlogger Alfie Deyes, and a pug puppy; the three make adorable videos in which they snuggle, goof around and do sweet domestic projects like decorating Christmas cookies. They seem very, very, very nice.

Zoella and Alfie -- or Zalfie, as, of course, they are known collectively -- are part of a new breed of YouTube celebrity who reap handsome endorsement and product-placement fees while maintaining the personas of approachable hobbyists rather than professional entertainers. What they do is not unprecedented; Tiger Beat and other fan magazines were purveying well-scrubbed stories about the lives of teen idols back when their grandparents were kids.

But while bands like the Monkees or Menudo were famously manufactured by canny adult impresarios looking to sell records and concert tickets, the YouTubers are self-made, at least up to a point. Most started out just talking about their lives, sharing basic skills like putting an outfit together or showing off their shopping hauls from the local mall. Once established, they might record an album or "write" a book, but at first all they had to offer was themselves, apparently unmediated.

Several commenters have observed that "authenticity" is Zoella's trademark, the thing that makes her fans love her. That's why her lack of forthrightness about the authorship of "Girl Online" (actually written by the experienced YA novelist Siobhan Curham) so undermines her brand. Zoella is not supposed to be yet another creation of cynical adult packagers; that's the whole point of Zoella. Reality TV stars like Nicole Richie, Lauren Conrad and Snooki might publish novels that are patently not the work of their own hands or minds, but everyone knows their kind of reality is fake. Zoella's kind of reality is supposed to be real.

It's not just Zoella's authenticity that's in doubt, though. Unlike, oh, let's say, Kurt Cobain, Zoella is both real and she's your friend. Her videos are like after-school FaceTime or Skype chats: She looks at and talks right to you, even when she's canoodling with Alfie on the sofa or making a rare tearful, unbrushed and makeup-free confession that "sometimes it all gets to be too much." She tells you everything, including that her life is not perfect, even if everybody else thinks it is! She confides that she suffers from anxiety and panic attacks. She trusts you. It's not insignificant that a popular piece of fan art on Tumblr shows a collage of 10 young YouTubers with the superimposed words "Suddenly you don't feel lonely anymore."

Although it's been a long time since I was 13, you never forget what it was like at that age to admire and long for the friendship of older, more popular girls whose hair always looked fantastic and who seemed to be having so much effortless fun. Wouldn't it be amazing if a girl like that wanted to be your friend, too, if she showed you how to make the most of your looks, wasn't afraid to play the clown every now and then and invited you over to make popcorn and watch sappy movies with her kind, handsome boyfriend? And wouldn't it be even better if boys were actually like Alfie, a big, tender, sleepy-eyed galoot who will not only make cute melted-snowman cookies with you, but give the lopsided results an affectionate kiss?

Even someone who knows better can get swept up in the sunny, giggly version of young adulthood depicted by Zalfie. If only life were really like this! It's love without Tinder, and youth without three surly roommates or chronic anxiety about the job market. It's all cuddles and benign jokes, one long rom-com montage where everyone looks extra-darling with icing smudged on their noses. Given what growing up is actually like, you can't really blame girls in their earlier teens (and even older women) for slurping up Zoella videos like the medication they are.

"Girl Online" itself is a familiar Cinderella sop, the story of a 15-year-old blogger who, while visiting New York City from the U.K., tumbles into a romance with a dreamy older guy she doesn't realize is also a pop star. He has a famous singer for a girlfriend, but his love for the heroine is true. Like most such books, "Girl Online" slips in some obligatory moral nutrients in the form of admonishments about online harassment and homophobia (they're bad), but the main story's fundamental dishonesty about human relationships passes unchallenged.

Zoella's fans, the ones shocked to learn that she didn't write this piffle herself, are not primarily angry, as wronged consumers might be, that she misrepresented the book as something it was not. What hurts most is that she misrepresented herself by keeping such an important secret from them -- them, her trusted confidants! Furthermore, she'd sworn that writing a book had been her "dream" since childhood. Who lies to her best friends about something like that? "You don’t know," one disgruntled fan wrote on Tumblr, "how much I wish I could just sit down with her and have a calm and honest conversation. I want her to know how she’s made me feel, and I want her to tell me the truth." Perhaps for the first time, the impossibility of such a scenario has become clear.

Pretending that she wrote "Girl Online" is not the only deceit Zoella and figures like her have practiced on a young and starry-eyed female fan base. It's not even the biggest one. But some lies are more necessary than others; young women in particular have to preserve some faith in the probability of decent men and true love because their path is perilous and, as Shakespeare once wrote, the world must be peopled. We all need a dose of Zoella (or her equivalent) now and then. But, please, just don't lie to us any more than you have to.