Climate change by the numbers: The cold data that drove a record-hot year

Is it hot enough yet? Will 2015 finally be the year we do something? 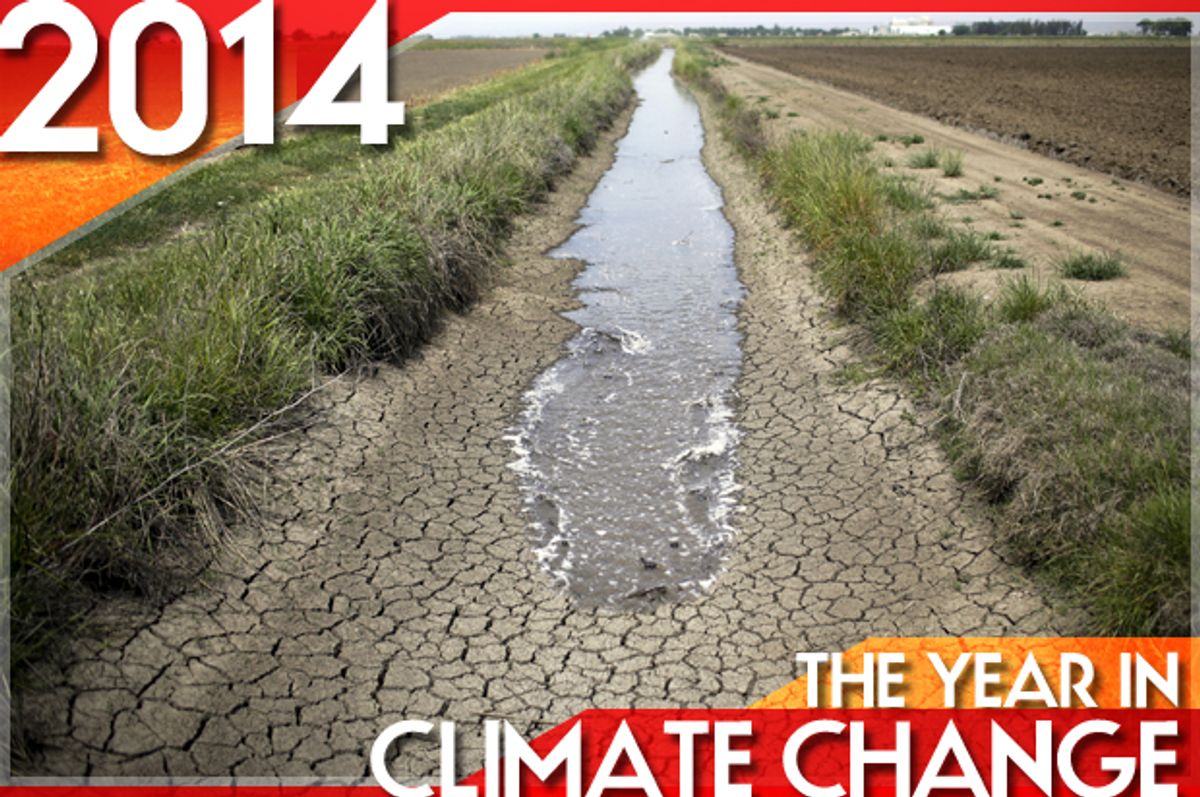 2014 was hot. Almost certainly the hottest year on record, and the latest point on a graph that's been trending upward since we first began pumping heat-trapping greenhouse gases into the atmosphere. But the real question about 2014 — a year that felt, for a variety of reasons, like a particularly tough one — is the question recently put forward by the New York Times' Mark Bittman:

Is it hot enough yet?

Not quite, the evidence would seem to suggest. With the exception of a few much-vaunted victories, 2014 was a year largely spent observing the many ways in which climate change is already affecting our lives, and figuring out how it's going to further disrupt them in the future, while only taking baby steps toward the global effort scientists say is needed to change course. As the findings of the IPCC's Fifth Assessment Report sank in and international negotiations ramped up, debate ranged from the link between extreme weather events and climate change to the even more complicated question of how much we should, and can, do to prevent the future disasters that science tells us are imminent.

What follows is a by no means comprehensive look back at some of the big (and small) numbers driving those discussions. As we move forward to an international climate treaty at the end of 2015 -- and onward, from there, to a world irreversibly transformed by the decisions we make in the near future -- the fact remains that it's only going to get hotter from here.

1.22: The deviation, in degrees Fahrenheit, of average global temperatures for the first 11 months of 2014 above the 20th century average, according to the NOAA.

142: Percentage by which atmospheric CO2 levels soared above the pre-Industrial Revolution average in 2013, the WMO announced in September, representing a record rate of growth.

93: The approximate percentage of heat trapped by greenhouse gases that ends up in the oceans.

1.15: The deviation, in degrees Fahrenheit, of June's global sea surface temperature above the 20th century average, "the highest for June on record and the highest departure from average for any month."

1.17: The deviation, in degrees Fahrenheit, of August's global sea surface temperature above the 20th century average, beating that record.

1.19: The deviation, in degrees Fahrenheit, of October's global sea surface temperature above the 20th century average, beating that record yet again.

1.03: The deviation, in degrees Fahrenheit, of global sea surface temperatures above the 1961-1990 average, for January through November, the highest in 135 years of record-keeping.

5: Number of Category-5 storms that formed this year in the West Pacific, bolstered by the waters' unusually warm temperatures.

1: Where 2014 ranks among Europe's hottest years, based on records that extend back to the 1500s.

35 to 80: The factor by which human influence on the climate increased the odds of Europe's record-setting heat, according to multiple teams of independent climate scientists.

50: Number of U.S. states that had temperatures below freezing on Jan. 7, thanks to the infamous Polar Vortex -- but the United States' cooler-than-average year only emphasized how unusually hot it was nearly everywhere else.

97.5: Temperature record, in degrees Fahrenheit, set in Australia during its hottest-ever day, which came a month before the official start of summer.

100: Percentage of California in a state of drought as of late April.

58: Percentage of California in an “exceptional” state of drought by July.

16.7 million: Number of Olympic-size swimming pools worth of water California requires to fully recover, according to NASA scientists.

12.08: Aggregate inches of rain that fell in California during the 2014 Water Year, which ended on Sept. 30 as the third driest in 119 years of records.

13.26: Amount of rain, in inches, that fell on parts of Long Island on one day in August -- a summer's worth of rain.

71: The percentage by which "extreme" rainfall events have increased in that region since the 1950s.

50: Percentage of people who, having lived through that January, said it made them more convinced that climate change is happening.

460: Number of people killed when catastrophic flooding hit parts of India and Pakistan, the latest in a series of extreme rainfall events linked to climate change.

23: The percentage by which this summer's Arctic sea ice minimum was below the 1981-2010 average.

35,000: Estimated number of walruses that congregated on an Alaska beach for a lack of sea ice.

3: Factor by which ice loss from the West Antarctic Ice Sheet, which researchers announced has entered a period of unstoppable collapse, has increased since 2009.

4: Extent, in feet, to which sea level could rise in the coming two-plus centuries, as a result of that melt.

11: Extent, in feet, to which sea level could rise if it collapses entirely.

$10.14 billion: The amount of money pledged by world governments to the U.N. Green Climate Fund, which will help developing nations adapt to the impacts of climate change.

8: Amount of land, in square miles, purchased by the island nation of Kiribati for $8.77 million in Fiji, where it plans to relocate its residents once they’re overtaken by sea level rise.

310,000: Estimated number of people who took to the streets of New York City for the biggest climate march in history.

65: The percentage of the planet’s carbon budget – the amount of greenhouse gases we can emit while still having a shot at curbing warming at 2 degrees Celsius  -- that we’ve already blown through.

2030: Latest point by which China, in fulfilling its end of the deal, will reach its emissions peak.

1 - 1.5: The total amount of warming, in degrees Celsius, that researchers say these pledges to curb emissions can prevent -- not enough to meet the 2 degrees target.

0: The net emissions we need to reach by 2070, according to the IPCC, for meaningful and cost-effective climate mitigation.