I fought (and lost) the battle against Christmas

I've had no luck getting my half-Jewish son to care about Hanukkah. Meanwhile, he can't stop singing about Jesus 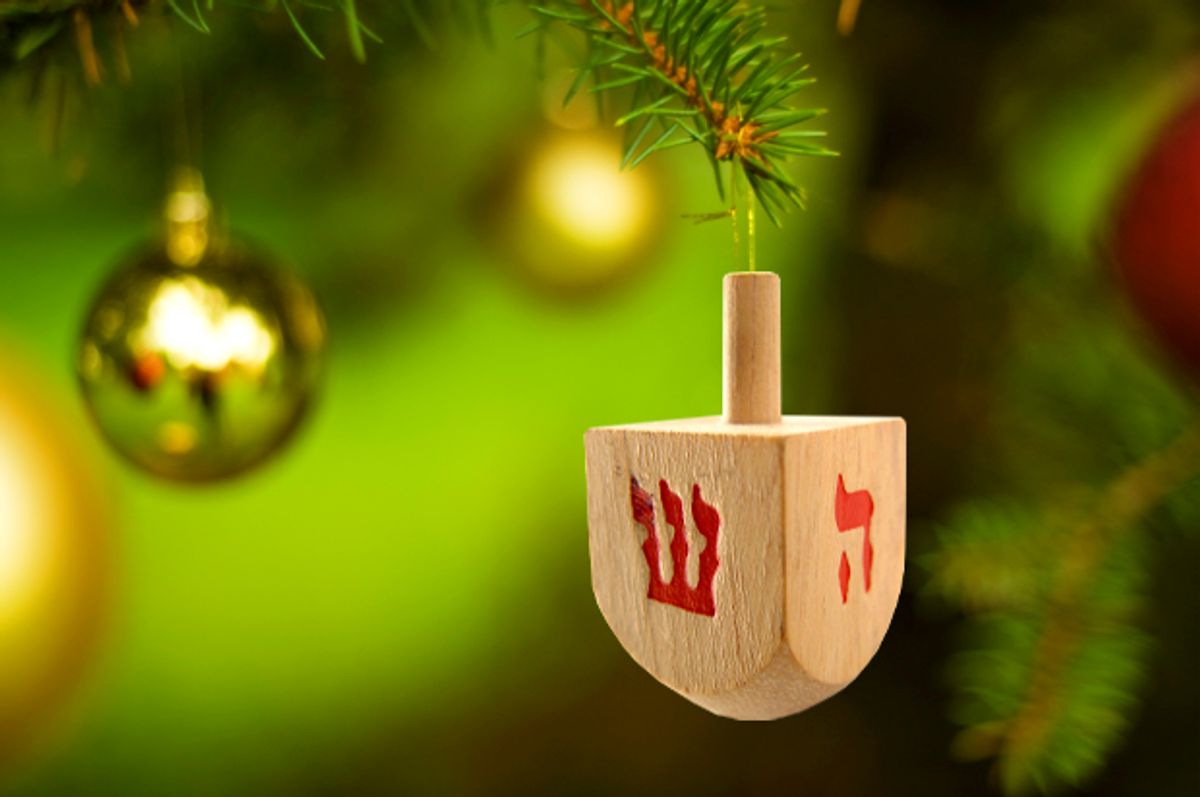 As we walked out of my son’s daycare in a local church last week, his teacher handed me a plastic bag containing thick cardboard cutouts of Mary, Joseph and a donkey.

“Take them home and bring them with you wherever you go. And at night, have your child write in the journal where you’ve been,” his teacher said.

I’m Jewish. My people like to joke, especially in the face of sorrow, like when my son comes home from school singing, “God is great. He is awesome,” or “God is so good, he’s so good to me.” It’s like living with Billy Graham. Last Christmas, with his mild speech impediment, he sang, “No woom at da inn, no woom at da inn, but you will find woom in my heart—” and I almost wept because it was so lovely, until he got to the next line, “Lord Jethuth.”

So why send my kid to daycare in a church? It was close to our house, the teachers really are kind, and it was cheap! And so I suffer the songs and stories, the glitter crucifixes, and the occasional houseguests – and their donkey.

My husband is actually Christian, which means by default, so is a part of my son. But like an open magic marker on a tablecloth, the Christian side of my son is bleeding over to my side, and I feel a need to protect my turf. And so every December, I give a little pushback, trying to extol the virtues of Hanukkah. It’s not easy. Comparing Christmas to Hanukkah is like asking, “Would you rather have ice cream or fiber?” But I stand firm. Every time he says, “After Thanksgiving comes Christmas,” I say, “Actually Hanukkah comes first. Then Christmas,” to which he replies, “No, it doesn’t.” And then I find myself in an argument with a 3-year-old, which I never win because he doesn’t give a lick about being right.

The other day, we bought some Hanukkah gel window decorations, and by the time my son went to bed, he had turned the candles into rocket ships with little flames coming out the back. By morning, the menorah was gone entirely.

“I threw it out,” he declared.

“You don’t have to celebrate Hanukkah,” I said, but like a dog that can’t stop itself from growling, I added, “I’ll just send back your Hanukkah presents.”

“But I like Hanukkah,” he cried. Sure you do, I thought. Two-timer.

My son’s teacher told me they were going to discuss all of the holidays, so I lent them my menorah and candles. My husband said I should lend them my electric menorah, which has little light bulbs instead of candles, because he didn’t think they’d let children near an open flame, but I thought, fire’s all we got.

“Did your teachers talk about Hanukkah at school?” I asked my son.

“But you talked about Hanukkah?” I asked.

“They said Hanukkah has a little star,” he said, barely listening to himself.

“Well,” I said, “they make it sound very exciting.”

It was sort of an inopportune time to bring home Mary, Joseph and the donkey, in the midst of my efforts to resurrect my son’s Jewish side, but I had no choice. As we walked out of his school with the bag of cardboard cutouts, my son bumped into some classmates, and they began playing tag in front of the school. As we were leaving, one of the mothers began waving her arms urgently to get me to stop. I rolled down the passenger side window.

“You forgot Mary and Joseph!” she yelled. I inadvertently left them on the church steps.

“Oh my god,” I said. Jews may not believe in Jesus, but I have a healthy sense of fear and superstition, and I’d just as soon not mess with religious icons. You never know which team got the story right.

I grabbed the bag, and my son and I took off. Our first stop was a hardware store to pick up a pair of tree pruners. When I came out, my son was using Mary to swat a bee.

We are so going to hell, I thought.

We headed to a play date with a boy we befriended because he likes to roughhouse as much as my son does. We were going to bring Mary and Joseph, but my son was afraid his friend would take them so we left them in the car. It was a wise move as every time my son picked up a toy, his friend would seize it back when my son wasn’t looking. I didn’t want to have to explain why we were returning Mary to the school without a head.

That night, Mary, Joseph and the donkey accompanied us to an Italian restaurant believed to be frequented by members of organized crime. We sat down, and I took Mary, Joseph and the donkey out of the bag and lined them up along the wall behind the salt and pepper. The waitress took our order and said nothing about our guests. They remained there as I drank a vodka martini and my husband had a beer, and the two of us bickered about how he asked me what I wanted to order, and I said, “I already told you, just two minutes ago. You don’t listen to me.”

As we drove home, I asked my son, “Are you looking forward to Hanukkah?”

“No,” he said. “I’m looking forward to Christmas.”

“Because I like presents, and Santa comes down the chimney, and that’s funny,” he said.

Oh, that funny, funny Santa, I thought. “What would you say if I told you Moses comes down the chimney —”

“He’s a Jewish guy. He comes down the chimney for Hanukkah, and he brings you twice as many presents as Santa. What would you say to that?” I asked. I could feel Mary and Joseph’s condemnation through the plastic bag.

Yesterday, my son and I made a gingerbread house, though he seemed more interested in playing with the gummy worms I’d bought than with decorating the house. I realized I never heard what happened when he brought Mary and Joseph back to class. Each child usually discusses where they took the two and their donkey.

“Did you get to tell everyone what you did, or did you have to skip it that day because you had your play?” I asked.

“We actually talked about them,” he said.

He paused and then lifted a gummy worm into the air and flew it like a rocket ship.

“Worms live in dirt. And you eat the worms. And they fall down your throat.”

Well, there you have it. At least my son has everything in perspective.

Caren Chesler is a freelance writer living on the Jersey shore. She writes about education, politics and finance. Her work has appeared in The New York Times, The New York Daily News, The New York Post, Investor's Business Daily and Bloomberg, among others.