It’s not our patriotic duty to like "The Interview": How this movie got a ridiculous perfect 10 on IMDB 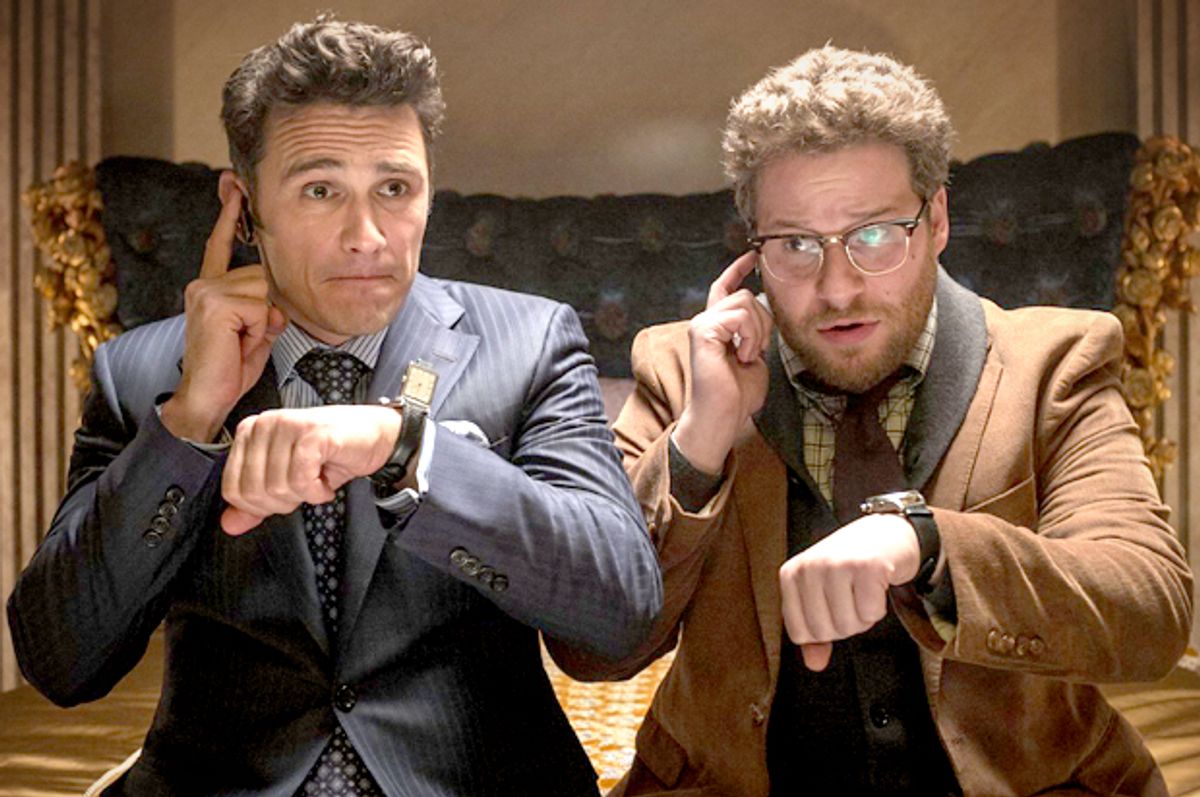 Over the weekend, votes on IMDb pushed the embattled Seth Rogen/Evan Goldberg comedy “The Interview” over the top of its user-assigned ratings to earn a perfect 10—never mind that the film hasn’t been released, online or in theaters, yet. Hovering now at 9.9, with more than 25,000 users weighing in, that's a stunningly high rating for a movie hardly anyone has seen. This is just the latest act in an extended collective farce that began with North Korea threatening Sony back in the summer over “The Interview,” which co-stars Rogen and James Franco as a television interview team dispatched to North Korea to assassinate dictator Kim Jong-un, and resulted in Sony pulling the film from its planned Christmas theatrical release.

George Clooney and Rush Limbaugh agree, sort of: This is cowardice. If there’s anything Americans cannot abide, it’s kneeling before fascism. A close second? Being told we can’t buy any old dumb thing we want, whenever we want it.

The FBI maintains that North Korea is behind the Guardians of Peace cyberattack on Sony’s digital files, which President Obama downgraded to “cyber-vandalism” over the weekend. In a statement released today, North Korea praised the hackers’ actions, denied their involvement and claimed that U.S. attempts to retaliate against them for the attack would be “like beating air after being hit hard,” a surprisingly poetic term for futile engagement that wouldn’t sound out of place in a stoner comedy featuring Rogen and Franco.

Meanwhile, people who possibly had at best a mild desire to see James Franco mug his way through an “idiots abroad” comedy now clamor to see the film, whether it’s offered online by Sony or released in theaters as planned. Don’t tread on us, Kim Jong-un, or our right to mediocre dick jokes. And if we can’t storm the theaters and face bravely the nebulous threats from abroad in person, at least we can click a few stars on a website to register our support.

What does it mean to have a perfect 10 on IMDb? The highest-rated film on IMDB’s Top 250 list is “The Shawshank Redemption,” otherwise known as the all-time favorite movie of people who don’t really think too much about movies, but they know a good story when they see one, which is to say most people. It has a 9.2. The next two down the list? Two of the most lauded films of American cinema, “The Godfather” and its sequel, clocking in at 9.2 and 9.0, respectively. There are some “no accounting for the Internet’s taste” rankings, like “Pulp Fiction” drawing higher scores than “Schindler’s List,” but overall, IMDb’s user ratings fall roughly in line with what you can expect from the general public. “Forrest Gump” even outranks “Goodfellas,” which may not be just, exactly, but at least it’s honest.

If “The Interview” opened in wide release tomorrow it would blow Peter Jackson’s epic finale of “The Hobbit” out of the water, despite all signs pointing to it not being that great of a movie. Critics who had access to early screeners have deemed the film overall to be lukewarm, and even studio execs called it “a misfire” and “desperately unfunny and repetitive.” None of that matters now. The American public has been denied the right to watch Seth Rogen and James Franco gape in awe at a painstakingly determined number of flaming embers engulfing Kim Jong-un’s face before the dear leader’s head explodes on film, and we won’t take it lying down.

It’s absurd if the filmmakers end up overcompensated for accidentally participating in a pantomime of a global terror standoff with a rogue dictator state, but it’s also such a quintessentially American flourish to this increasingly absurd tale. Of course we would embrace an embattled buddy movie as a cause célèbre for the very freedoms upon which our country was built. But can we defend that right without pretending this movie is anything more than what it likely is—a desperately unfunny and repetitive dick joke marathon (thanks a lot, Rogen-Goldberg!) we now have a "moral responsibility" to buy?