The right politicizes murders: How it exploited tragedy, told de Blasio how to raise his son

Blaming protests for the murder of two police officers is wrong. Criticizing the mayor's advice to his son is worse 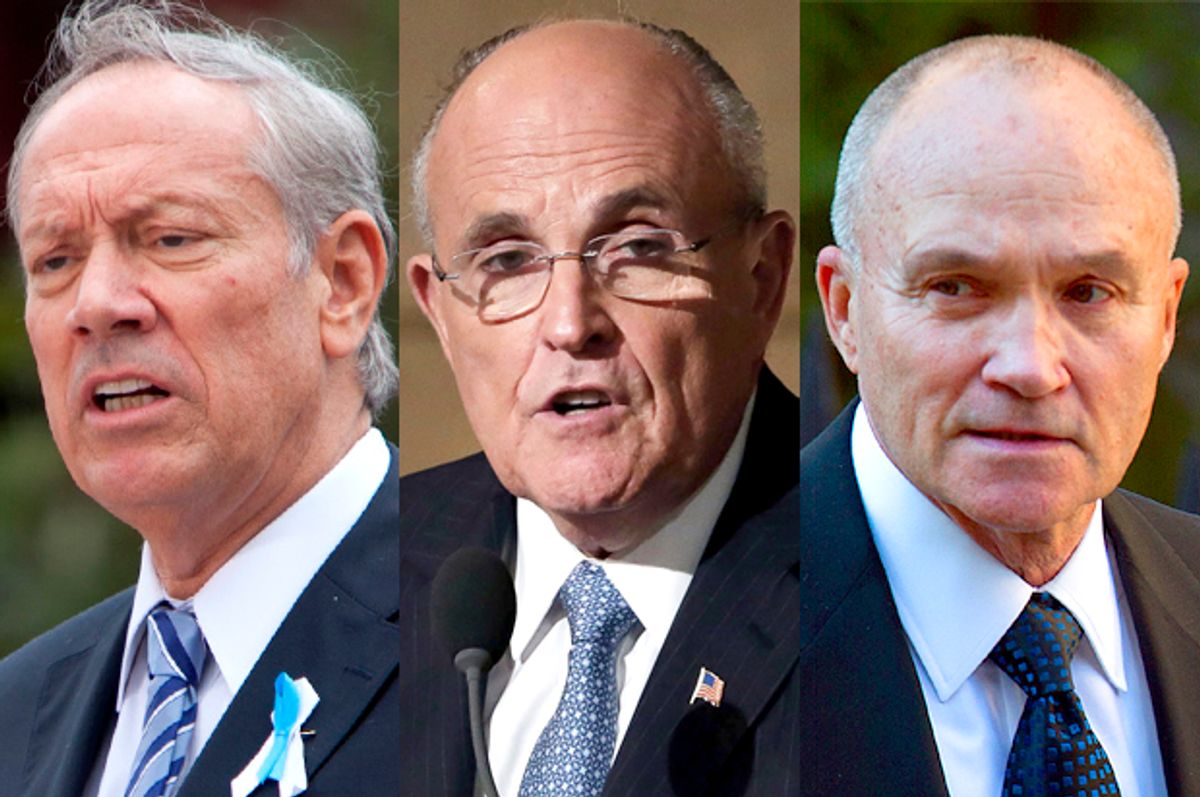 The heartbreaking murder of two New York police officers Saturday night, by a mentally ill Georgia man who also shot his ex-girlfriend, saddens all decent people. But it’s the worst in demagoguery to blame the peaceful movement against police brutality that’s emerged nationwide, in the wake of multiple killings of unarmed black men, for the tragedy.

It shouldn’t be surprising that right-wing police defenders would politicize an outrage like this. Patrolmen’s Benevolent Association chief Pat Lynch continues to shame himself, by claiming Mayor Bill de Blasio has “blood on his hands” for expressing sadness at the killing of Eric Garner by police in Staten Island. What I find shocking is that de Blasio’s police critics are using the murders to tell the mayor how to parent his own son.

It turns out that Lynch and his allies were offended, in the wake of the grand jury decision not to indict the officer who choked Garner, that the mayor shared his experience raising his biracial son, Dante, he of the storied Afro -- including his advice to exhibit care and caution in encounters with the criminal justice system.

“Because of a history still that hangs over us, the dangers he may face, we've had to literally train him as families have all over this city for decades in how to take special care in any encounter he has with the police officers who are there to protect him," de Blasio said after the Garner verdict.

Race-baiting New York Post columnist Michael Goodwin attacked de Blasio immediately.  “The city is in turmoil over the Staten Island case and the mayor throws gasoline on the fire by painting the entire police force as a bunch of white racist brutes,” Goodwin wrote after de Blasio’s remarks. “Has he no shame?”

That’s a question easily turned around on Goodwin.

But now former NYPD commissioner Ray Kelly has joined the chorus. ”I think when the mayor made statements about that he had to train his son to be -- his son who is biracial -- to be careful when he's dealing with the police, I think that set off this latest firestorm,” he said Sunday on ABC’s “This Week.”

Actually, Commissioner, the firestorm was set off by a cycle of police killings in multiple cities. That’s what led to protest, and it’s the protest that has led to a preemptive-strike “firestorm” by police against their civilian critics. But that backlash had begun before de Blasio made his remarks about Dante after the NYPD’s Daniel Pantaleo’s acquittal in the Garner case.

Surely Kelly’s not presuming to tell de Blasio how to raise his son. So then what’s the issue – that de Blasio made his advice public? Should he have hidden it? Lied when I asked him about it back in July 2013? All over this country, the parents of black and biracial black children are having that conversation with their kids. There is a history of police treating young black men with disrespect and sometimes savagery. Young black men are 21 times more likely to be shot by cops than young white men.  I don’t have one black friend or colleague without a story of a charged encounter with police. These particular facts aren’t up for debate.

But right now police officers and their defenders want to put everything up for debate.

Of course many on the right are also trashing President Obama and Eric Holder for their supposed “anti-police” comments.

“We’ve had four months of propaganda starting with the president that everybody should hate the police,” Rudy Giuliani said during an appearance on Fox News on Sunday. “The protests are being embraced, the protests are being encouraged. The protests, even the ones that don’t lead to violence, a lot of them lead to violence, all of them lead to a conclusion. The police are bad, the police are racist. That is completely wrong.”

Giuliani ought to talk to his "Meet the Press" debate partner Michael Eric Dyson, who has repeatedly criticized the president for lecturing protesters, not cops, about the need for calm and understanding. Nothing Obama has ever said sounds remotely like "everybody should hate the police."

I don't think that they should fear the police. But I certainly think that we have to build up a better relationship between young people, people of color, and people in law enforcement. There’s distrust that exists on both sides. There's misunderstanding that exists on both sides. And we have to come up with ways in which we bridge those gaps, so that people don't demonize other people; so that people understand, on both sides, that there are people trying to just do the best that they can.

We're not at a stage yet where I can honestly say that if you're a person of color, you should not be concerned about any interaction that you have with the police — in the same way that I can't say to a police officer, "You shouldn't worry about what community you are being asked to operate in."

Notice how Holder points to the fear and distrust on “both sides.”  His most pointed suggestion for reform in the interview was better collection of statistics – right now there’s no national database on police killings, for instance, and police have resisted establishing one.

What strikes me is how cautious Obama, Holder and de Blasio have been in their remarks about this latest epidemic of police killings, given the grief and rage in the black community over these issues. De Blasio had the potential to be a mediating, crossover figure in a dispute that has very little common ground. But his police department antagonists have made that all but impossible. This is tribalism, and by sympathizing with his biracial son -- Dante's mother, Chirlane McCray, is black -- de Blasio chose the wrong tribe.

Kelly has the audacity to suggest de Blasio’s relationship with the police is so beyond repair, he’s going to need a third party intermediary to deal with them. That may be true, but it’s only because people who might have been mediating forces, like Kelly, jumped onto Lynch’s side.

Unfortunately, even de Blasio’s commissioner, Bill Bratton, has placed some blame on the anti-brutality protests for the killings. “Let’s face it: There’s been, not just in New York but throughout the country, a very strong anti-police, anti-criminal-justice-system, anti-societal initiatives underway,” Bratton said Sunday. “One of the unfortunate aspects sometimes is some people get caught up in these and go in directions they should not.”

It's disappointing that Bratton would cast his lot with those who want to link the actions of one mentally ill man from Georgia, who first shot his ex-girlfriend, to the work of thousands of mostly peaceful protesters in New York. But on the "Today" show Monday, Bratton expressed support for de Blasio (who has taken heat from protesters for hiring and keeping on the man who pioneered the "broken windows" approach to policing that emphasized enforcing quality of life laws like those against selling loose cigarettes, which led to Garner's arrest and killing.) Asked if de Blasio's words had increased the danger to police officers, Bratton quickly said no. "I don't believe that at all. I've spent a lot of time with this man. I have received this year over $400 million outside of my normal budget to improve our training, to improve our facilities, to acquire technology."

Right now New York needs a mediator between the police and the communities they serve. It should have been the mayor, but sadly, right-wingers and a lot of police officers are using a terrible tragedy to make sure that no one can find middle ground.