Cops all over the country are demanding "unequivocal support." Here's why an obsession with order is to blame 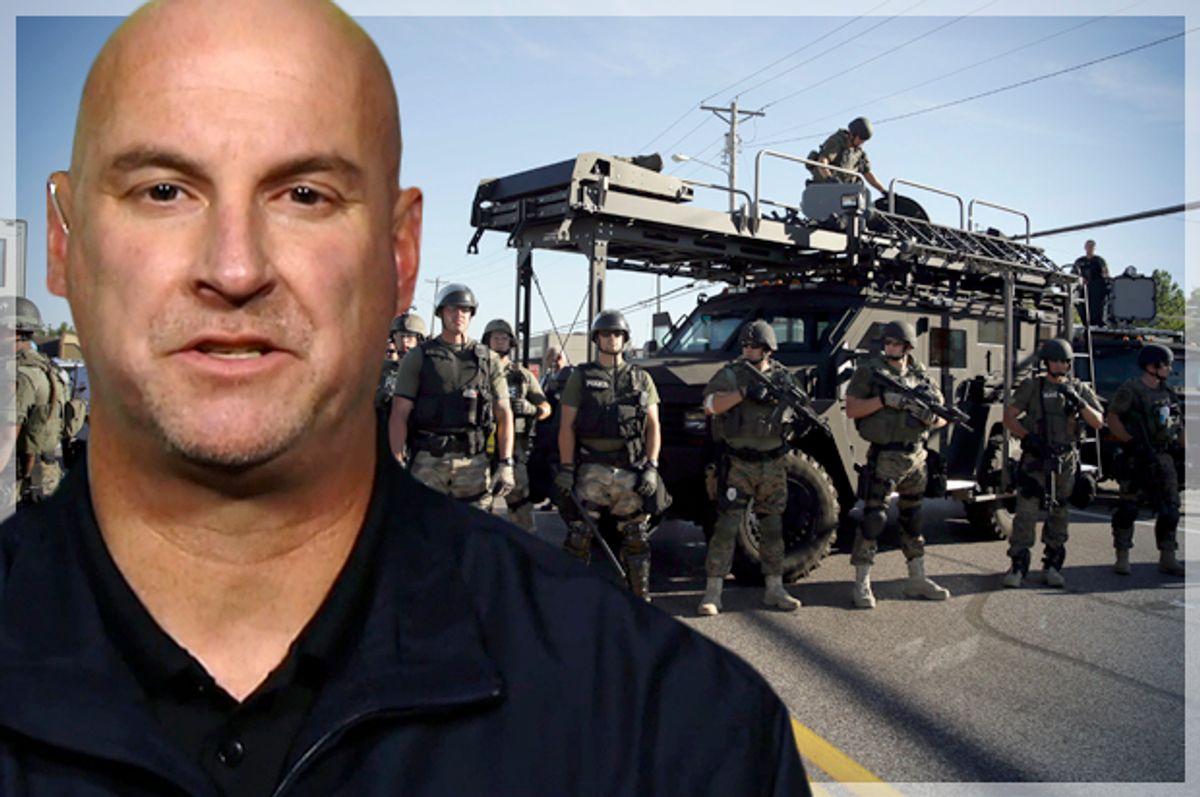 For those who’ve been following the ups and downs (mostly downs) of Bill de Blasio’s relationship with the NYPD, there was little about the officers’ response to the murder of two of their colleagues that was surprising. For a number of reasons, including his vocal opposition to stop-and-frisk and his public alliance with Rev. Al Sharpton, de Blasio was never popular among the force’s rank and file. Even before Officers Liu and Ramos were killed, the head of the cops’ union, the bombastic Patrick Lynch, was urging members to sign a petition asking the mayor not to attend their hypothetical funeral. He also accused de Blasio of foregoing responsible governance in favor of leading “a fucking revolution.” So when he said de Blasio had Liu and Romas’ blood on his hands, it was both heinous and more or less expected.

For many of those less attuned to the city’s politics, however, the patent animosity some officers sent de Blasio’s way was disturbing. New York’s a representative democracy, after all, and de Blasio is the mayor. Don’t the police ultimately work for him? Technically, yes. But the reality is more complicated (a lesson all of de Blasio’s recent predecessors have learned, none more so than David Dinkins). Judging by recent history, and according to the dictates of today’s conventional wisdom, any politician who wants to run New York City not only has to win the most votes, but also has to earn the city polices’ at least grudging acceptance. And by gently criticizing some NYPD practices — as well as revealing that he’s told his African-American son, Dante, to be cautious around law enforcement — de Blasio has seemingly lost the cops’ assent. He may never get it back.

I’d imagine that many people watching the drama unfold from afar are consoling themselves with the thought that, like so much else about the city, the hyper-sensitivity of New York’s police force is unique. They’d be right, at least to a degree; the NYPD stands alone in scale and ambition. But if you listen to some of the rhetoric that’s recently come from police unions and their most loyal politicians, you’ll realize that the problem currently engulfing de Blasio doesn’t end at the Hudson. It extends all across the country, influencing communities large and small, black and (less often) white. The problem isn’t the unions themselves or “bad apples” among the rank and file. The problem is that the culture of law enforcement in America has gone badly off-course; too many officers — and, for that matter, too many citizens — forget that law enforcement’s mandate is to preserve justice as well as maintaining the peace.

You’d think it would be impossible to offer a better illustration of the mentality than Rudy Giuliani’s remarkable 1994 speech on why freedom is about obeying authority. Unfortunately, recent public statements from representatives of powerful police unions in two major American cities indicate that many officers’ privileging of order over justice has only gotten worse. The day after news of Liu and Romas’ murder first broke, the Fraternal Order of Police in Baltimore (where the killer shot an ex-girlfriend before heading to New York) released a statement that made Giuliani’s rhetoric from two decades ago sound positively libertarian. “Once again, we need to be reminded that the men and women of law enforcement are absolutely the only entity standing between a civilized society and one of anarchy and chaos,” the statement said before laying blame for the shooting at the feet of President Obama, Attorney General Holder, Mayor de Blasio and Rev. Al Sharpton (all of whom are either black or have black people in their immediate family). “Sadly,” the union continued, “the bloodshed will most likely continue until those in positions of power realize that the unequivocal support of law enforcement is required to preserve our nation.”

At no point in the press release did the union acknowledge its members’ duty to protect Americans’ rights as well as their persons. There wasn’t even a perfunctory gesture to that effect. Instead, the union statement spoke of “the dangerous political climate in which all members of law enforcement, nationwide, now find themselves” (the rate of officers being killed is at a 50-year low) and how being a member of American law enforcement hadn’t been so bad since the civil rights movement (or, as the union puts it, “the political unrest of the 1960’s”). At the end of the statement, the union reiterated why it believed support for cops must be “unequivocal,” saying that Baltimore citizens must help “to restore the order necessary for their own safety and for ours.” In sum, the union was arguing that American citizens — including politicians — must do what they’re told, lest we fail to “preserve our nation.” The enemies of civilization, apparently, had already broken through the gates.

While the Baltimore union’s statement could hardly be described as subtle, it still paled in comparison to the comments of Jeffrey Follmer, the president of the Cleveland Police Patrolmen's Association, whose unvarnished authoritarianism made headlines just last week. Appearing on MSNBC in order to defend his claim that Cleveland Browns wide receiver Andrew Hawkins should be forced to apologize for political speech, Follmer told host Ari Melber that the shooting of 12-year-old Tamir Rice was “justified” because the child refused to “listen to police officers’ commands.” Never mind the fact that Rice was shot almost immediately, and that the cop who shot him had a history of rank incompetence; according to Follmer, if “the nation” would simply obey when officers “tell you to do something,” everything would be all right. And if the officers commands are unconstitutional or in any way objectionable? Be quiet and let “the courts … figure it out.” Not content to simply issue commands to those engaged with officers on-duty, Follmer also ordered Hawkins and other athletes like him to “stick to what they know best on the field” because their voicing opinions on police behavior was “pathetic.”

As I said before, these two examples of rabid authoritarianism are striking but far from unique. If you were so inclined, you could spend nearly all day, every day, reading stories in the local and national news of law enforcement agents behaving as if they were exempt from the social contract and the law. And although the reasons why are too various and complicated to untangle in this column, the philosophy of “broken windows” policing — developed initially by followers of neoconservatism, an ideology comfortable with authoritarianism, to say the least — is undoubtedly at least partially to blame. When the emphasis of law enforcement shifts from upholding law to upholding order, it’s inevitable that officers will begin to envision themselves as the only thing standing between “the nation” and the abyss. With the stakes raised to such existential levels, it’s hardly surprising that officers from Baltimore to Cleveland to Ferguson to New York see themselves as beyond the control of a mere politician, not to mention the citizenry itself.

Bill de Blasio and his millions of supporters may think the mayor’s in charge. But it seems that in the minds of a frighteningly large number of police officers, both he and the Constitution are simply getting in the way.