Confessions of a secret Muslim

For 12 years, I hid my true identity from friends. I escaped discrimination – but I began to hate myself 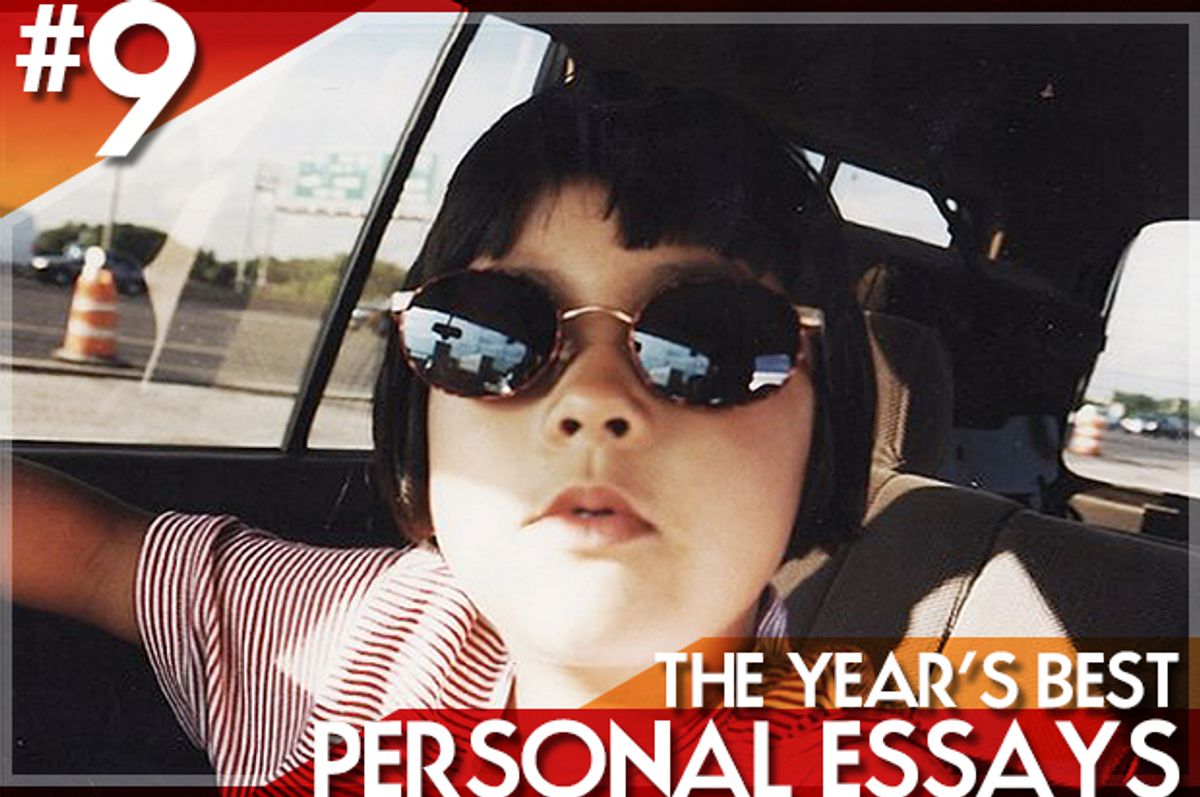 I didn’t pray much as a child. Sometimes I would copy my grandmother as she prayed toward Mecca. I remember the ritual: bow down, come back up, bow down, looking to both sides while twirling my right fingers. Then she would pick me up with a sheet tied around her waist and carry me over to the neighborhood park, where we would lie down in the grass. This is all a dream to me now. A time when an elderly woman with a hijab and her granddaughter wouldn’t get stared at for being a Muslim.

Back then, I felt like an ordinary child. Ours wasn't a religious family, besides celebrating Eid-al-Fitr and Ramadan. “Muslim” wasn’t my identity. It was my faith. I was an American.

But my identity crumbled when the Twin Towers fell. I was 8 years old, in third grade, and I was as frantic as any kid would be that day, trying to understand why so many children had to lose their mothers and fathers. I couldn’t imagine their pain.

"You're a terrorist!" said my best friend in the hallways of our elementary school, pointing at me, his innocent eyes turned menacing. I couldn’t believe it. But this was the start of a new life for me.

That year was hell. Friends distanced themselves. Teachers became mean. Such alienation was normal for me and surely millions of Muslims worldwide in those years. Fearing discrimination and violent attacks, my family changed our last name. “Harvard” was a slice of Americana; a far cry from our original surname. My parents wanted to protect my sister and me, but elementary school teachers and kids knew exactly what had happened, and our situation only became worse. In my silence, lies continued to grow.

In sixth grade, a teaching assistant gathered all the students around the classroom for the last lesson of the day.

"Islam is an evil religion. Muslims all around the world kill innocent, non-Muslim people," she said. "In their holy book, they said that all good Muslim children must kill kids like you."

I wanted to say something. I wanted to speak out, because I knew that wasn't true. I wanted to tell her that I would never hurt my best friends or any living thing, and that there are more than a billion Muslims who are loving and kind.

But I had no power. I was a child, a Muslim one, and she was an adult with authority. What voice did I have?

That year I moved to a new school about an hour away. It was the perfect opportunity to start over and pretend to be somebody I was not. I completely disregarded my faith publicly as a Muslim -- and my real life undercover began.

Living as a fraud is exhausting. It’s exhausting to your mind, body and soul. It seemed like people asked me most about my faith when I kept it a secret. My father taught me how to reply:

“What do you say when someone asks what is your religion?” asked my dad.

“That there is no god but God,” I replied.

“Nooooo,” with his elongated gasp of disapproval, “you say that you are seeking the truth.”

Strangely enough, inside our house, the opposite was happening. With persecutions of Muslim-Americans at an all-time high, my father pushed our family to learn more about our faith. My parents never missed a single day of prayer. I would wake up in the middle of the night and go downstairs for a glass of water only to hear the booming voice of the Qu’ran over our Bose stereo. My parents started playing it on a loop to protect us from any hardship or “evil,” and they still do it to this day.

But hiding like this comes at a great cost. I didn’t have close friends, because I feared discovery and didn’t think anyone could ever understand. Elementary school had taught me the cost of exposure. I could not trust anyone with my deepest, darkest secret.

I was a freshman in college when I first came close to being discovered. My friends and I were about to order late-night pizza.

"Hey Sarah, you want a slice of pepperoni?" said my friend.

I panicked. I didn't know what to do. Should I finally embrace it? Would I lose my friends over this? Why can't I just let it go? All those thoughts were rushing through my head. Luckily, the conversation was hijacked by some loud drunk running through the hallways. Crisis averted.

Fast-forward to the summer of 2013 when I had a journalism internship in Washington D.C. I was excited to be working in the same city as the White House, amid the action of the nation's capital. And it was going great, until I realized the journalism industry wasn't exempt from outdated bigotry. We were discussing a potential story about the rise of Mormonism one day, and I was alarmed to hear the typical uneducated jokes from staffers about polygamy and bountiful offspring. I was trying to set the record straight, when someone mentioned Islam.

Another intern looked right at me and said, "Well, I would rather Muslims didn't reproduce."

That wasn’t the only time. When discussions came up about social justice and the Middle East, I often heard that old toss-off -- "Oh, Muslims cause all the problems in the world.” It made me so uncomfortable; I never went to parties or social events hosted by the publication.

Meanwhile, I began to feel like more of a coward for failing to embrace who I was. My family told me to hush and stay quiet when bigotry or false claims about Muslims were made. But I couldn't anymore – it was no longer my nature to keep silent.

For the longest time, I was thankful for my multi-ethnic background and Japanese-like physical appearance – no one would assume I was a Muslim. It allowed me to “pass.” And it kept me shielded from frightened stares and airport security checkpoint probes. But my freedom from direct discrimination was starting to make me hate myself.

Looking in the mirror, I had grown sick of my long round face, small plump lips and slightly slanted eyes. I was disgusted by my Mediterranean golden skin tone, the light features that set me apart from the stereotypical Muslim. I hated how I had allowed my thick black locks to flow freely, never eliciting flashes of anger from a stranger, because I hid my faith by exposing my hair.

I was a cop-out, a sell-out. I became depressed and angry at myself – I still am – for staying silent while I watched these injustices occur before me and felt only relief to have escaped consequence. I never gave consideration to those who were brave enough to embrace their own Muslim identity.

Hiding your identity erases your most cherished memories – as if it’s forbidden or dangerous to remember a time when you were free to express who you truly were as an individual. Hiding my identity made me hate myself and made me feel like an example of all that is wrong with the world. I had run away from my true self.

One day, I sat on a bus stop in front of the Department of Homeland Security in Washington, D.C. A Muslim woman wearing a hijab sat right next to me, and I felt ashamed. This woman was a true rebel, fighting against the injustices of society simply by wearing a headscarf that displays her love for Islam and Allah. And here I was, scared of my own identity. I couldn’t do it anymore.

So last November, I came out of my Islamic closet via Facebook. I was tired of hearing criticism about Muslim-Americans within my friend circle. The accusations that all Muslim women are oppressed and that they ought to be liberated from their hijab outraged me. The ongoing raids and wiretappings at mosques made me fearful for the elimination of our liberties and freedom of religion. The continued injustices against Muslim-Americans by the Transportation Security Administration goes on every single day, and I have said nothing. The cowardice that steered 12 years of my life could not let me sleep at night.

I was disappointed by a few friends’ reactions. One raised his eyebrows in a way that expressed his silent disapproval. Another said, “It’s OK. You assimilate, so you’re a cool Muslim,” as if the millions of other Muslims in the world aren't "cool,” because they choose to remain faithful to their religion.

But I had so many friends who were kind and understanding. They didn't think any differently of me. And those are the friendships that remain true.

And so now, I am proud to say that my name is Sarah. The name I carry is the name of Abraham's first wife and the mother of Isaac – the descendent of the Hebrews. I am so blessed to be able to say that Islam is my religion and that the Qu'ran is my conscience.  Therefore, I am proud to stand up tall and to say loud and clear that I bear witness that there is no god but God – And I bear witness that Prophet Muhammad is the Messenger of Allah.

Salaam Alaikum – May peace be with you.

Sarah Harvard is the founder of FreeCulture and is the former Editor-in-Chief at DL Magazine. She has an interest in US-Middle East Relations, national security, identity and culture in America. You can follow more of her work at www.sarahharvard.com.