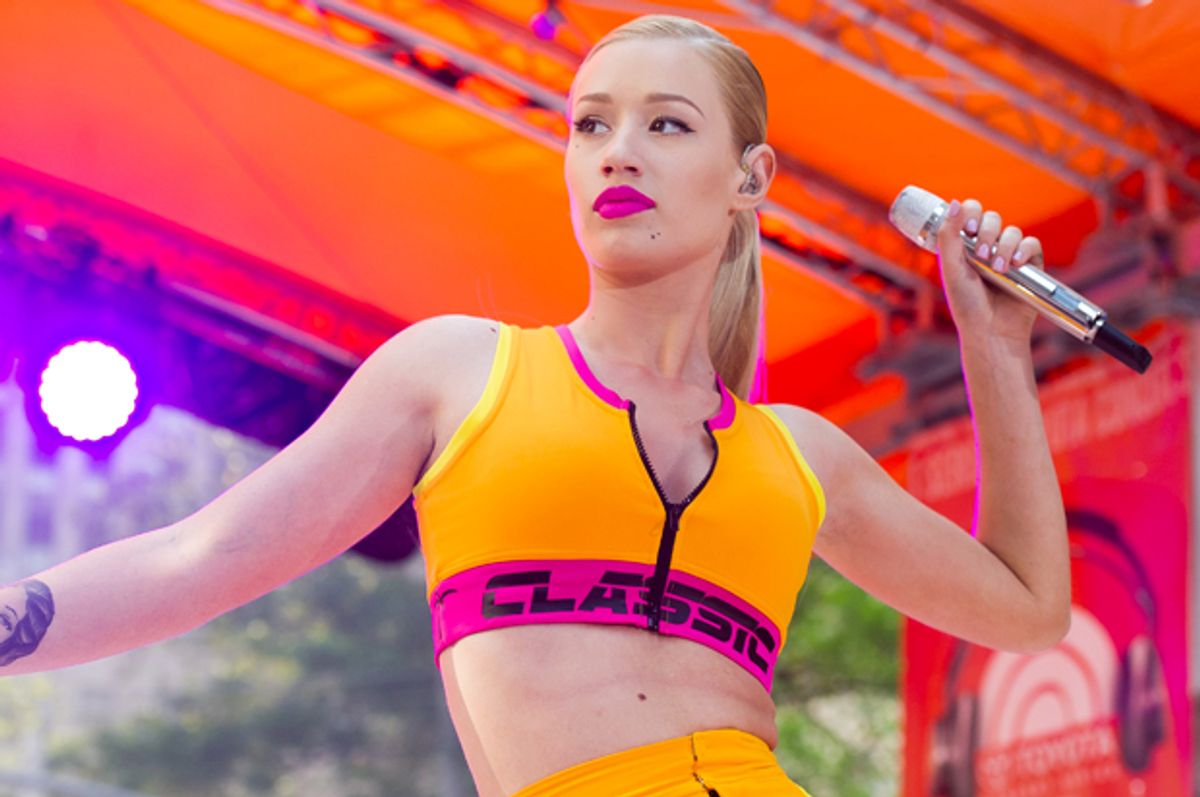 Festivus came early this year for the hip hop community as pop-rapper Iggy Azalea became the tinsel-free pole around which stars gathered to air their grievances. Like so many of us during the holidays, world-renowned hip hop artists are stuck at home surrounded by an army of extended family, trying to duck last-minute shopping trips and Aunt Bert’s pointed questions about the health implications of drinking before 5 p.m. Or they’re stranded in an airport lounge with nothing but wifi and the hassles of air travel to fuel them. What else is there to do but stoke the fires of an epic sharing of disappointments on Twitter? And who’s a more controversial target right now than Grammy nominee Iggy Azalea? Game on.

Here’s the background: in a radio interview last week, Azealia Banks reignited her early-December beef with Azalea, pointing Azalea out during an emotional interview with Hot 97 as an example of white appropriation of black culture. Cue the snarky response from Iggy:

Special msg for banks: There are many black artists succeeding in all genres. The reason you haven't is because of your piss poor attitude.

The two have gone back and forth before, but their latest round of online sparring attracted more than just an audience. Why sit back and watch two artists tear each other apart on social media when you can jump in and vent a little year-end stress, too? On Saturday, industry veteran Q-Tip decided to weigh in with a little Hip Hop 101, in case they don’t teach the core curriculum Down Under. His incredibly earnest attempt to engage the 24-year-old Australian on the socioeconomic and political roots of the genre the acclaimed Tribe Called Quest co-founder now finds himself sharing with the “Fancy” emcee is eaten up by fans, but fails to impress the target:

Though she’s usually no shrinking violet, Azalea had no immediate fire-back to Q-Tip’s lessons. But when will.I.am jumped to her defense, and even Lupe Fiasco chimed in to say she has “her place” in hip hop, Azalea got a shot in at Q-Tip’s lecture while thanking them for their “really nice” comments.

i find it patronizing to assume i have no knowledge of something I'm influenced by, but I've also grown up with strangers assuming that.

im also not going to sit on twitter & play hip hop squares with strangers to somehow prove i deserve to be a fan of or influenced by hiphop.

If Trivia Crack released a “Hip Hop Squares” spin-off it would be so well-timed. Banks jumps back in, outraged that Iggy’s “whatever, Prof. Q” response.

How the fuck can you address a rap legend like @QtipTheAbstract and refer to "hip-hop" squares in the same breath??!?!?!!?!?!?!

On Festivus, after the airing of grievances come the feats of strength. That’s where Lupe Fiasco arrives, full of irritation over his blowing-up mentions. Fed up with being criticized by bystanders for his lukewarm “defense” of Iggy, Fiasco wrestles the armchair critics into submission with this extended rant:

According to "Seinfeld," out of Frank Costanza's public fight one December 23, a new holiday was born. And now, thousands of fans can share and "like" the tweets that express their own frustrations instead of picking a fight with Mom over table decorations. There's a moral to this Festivus parable—the only thing more cathartic than participating in an epic social media brawl on a stressful holiday afternoon is watching celebrities do it for you. At this point, the only thing that could neutralize this extended beef would be an arm wrestling match between Banks and Azalea refereed by Chuck D himself. That would be a Festivus miracle.