Evil torturers catch a break: How America got distracted from a national travesty 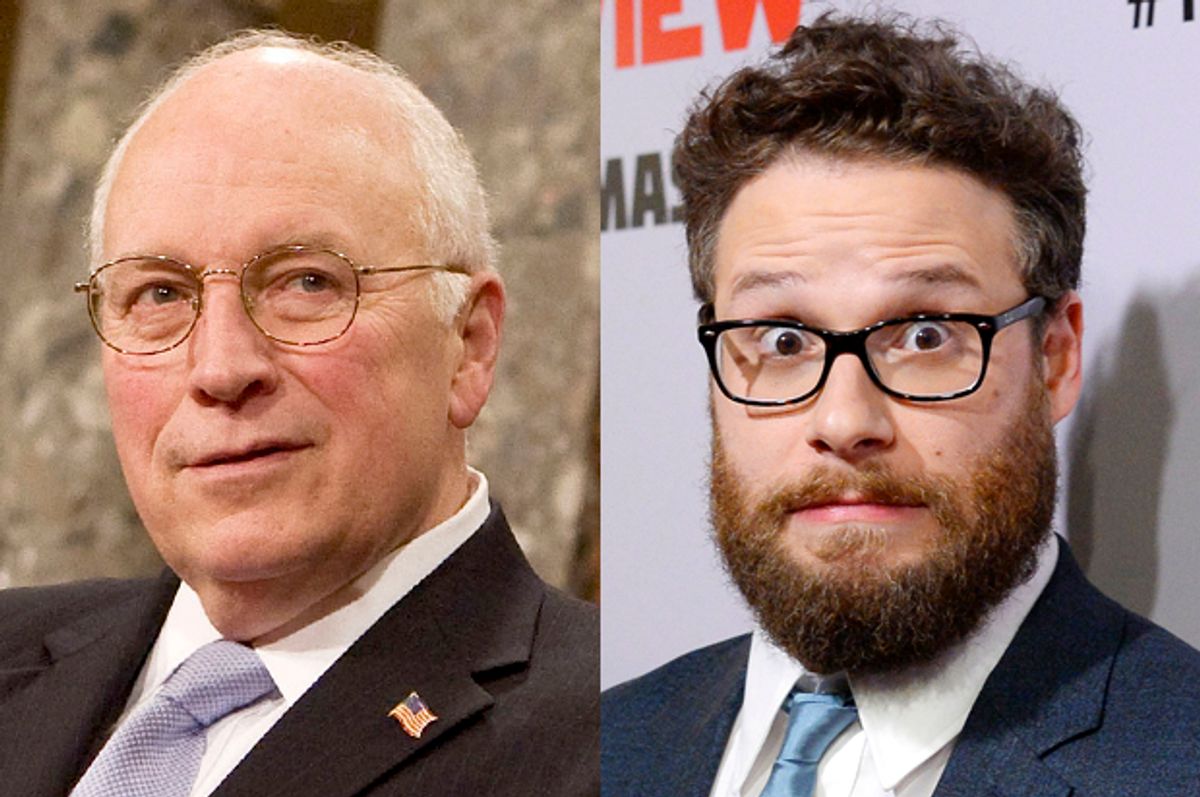 The United States is in real trouble when the story about the hacking into Sony Pictures computers and their decision to pull an inane comedy totally big foots the deeply troubling Senate Intelligence Committee’s study of the CIA’s Detention and Interrogation Program.

Talk about using the holidays to flush bad news. Between the salacious internal Sony emails, the Obama administration’s watershed reset of U.S.-Cuban relations, and Christmas the average American will not get reporting on the  fine print in the Senate Committee report nor a full analysis of the ambiguous CIA response.

In this case the devil really is in the details. For years the public was told the torture techniques saved lives, prevented additional terror attacks and helped lead to the capture of Osama bin Laden. Not so, says the Senate report, which goes on to chronicle years of obfuscation, deceit and deception by a CIA that was hell-bent on covering its tracks. Now the CIA is saying it is “unknowable” if the torture techniques produced results.

Even well into the Obama administration the Agency continued to go to the extraordinary steps of hacking into the Senate Committee’s computers. The Agency’s track record  already includes the covert destruction in 2005 of 92 videos of detainee interrogations, which would have been critical to congressional investigators. In 2010 a federal special prosecutor declined to prosecute.

What emerges from the Senate report is a CIA that post-9/11 quickly turned to outside contractors and used multiple “black sites” where they employed what they euphemistically called  “enhanced interrogation techniques.” These practices  included waterboarding, forced rectal feeding, extended sleep deprivation, keeping subjects in prolonged stress positions including standing on broken bones, closing detainees into coffin-like boxes,  staging of mock executions, as well as making threats to kill or rape detainee family members.

Dozens of individuals were wrongfully detained by the CIA and  two of the Agency’s informants were mistakenly tortured. One detainee died of hypothermia after 48 hours of sleep deprivation, getting doused with cold water and being  chained to a concrete floor.

Certainly these are all activities that would be defined as illegal under the United Nations Convention Against Torture, which the United States ratified in 1994. Under the terms of the Convention there are no “exceptional circumstances,” like  preventing a potential terrorist act, which would permit the use of these techniques that deliberately inflict “severe pain or suffering, whether physical or mental.”

The Senate Committee report concludes that the EIT techniques were ineffective  and that the Agency regularly misled the White House and Congress about the nature of the program and its efficacy. The outside contractors, who pocketed more than $80 million from 2001  through 2009, carried out “inherently governmental functions such as acting as liaison between the CIA and foreign intelligence services, assessing the effectiveness of the interrogation program, and participating in the interrogation of detainees held in foreign government custody.”

New Crossroads labor correspondent Gregory Heires writes in his aptly titled post  “Outsourcing Torture”  that “the contract workers had a conflict of interest. They were responsible for carrying out torture while also determining whether it was effective and safe.”  Heires notes there was a built-in financial incentive to be brutal.  The contractors who waterboarded detainees got $1,800 a day, four times the amount paid to interrogators who did not.

Some of the most compelling material appears in the attachments of the Senate report in the form of additional statements made by individual senators who served on the committee.

Colorado Sen. Mark Udall says the investigation documented that the CIA’s interrogation program was “shaped and conducted by individuals who didn’t understand what they were doing and who had a financial stake in representing the program as effective.”  That inherent conflict of interest was even more problematic because the EIT program  “was managed incompetently by senior CIA personnel,” writes Udall.

"The 'enhanced interrogation techniques' were far more brutal than anyone understood. Perhaps most importantly, these techniques did not work. Nonetheless, the program was sold to the White House, the Department of Justice, the Congress, and the media as a necessary program that provided unique information that ‘saved lives,” according to Udall.

Udall says even as late as last year the CIA was still not being straight with Congress. “As I discovered in late 2013, an internal CIA review of the program initiated under former Director Panetta corroborates some of the significant findings of the [Senate committee] Study and acknowledges significant errors made during the course of the CIA program—but this internal review conflicts with the CIA’s own official response provided to  the Committee, which denies or minimizes those same errors.”

Udall reports that Committee staffers spotted those  glaring contradictions between the internal Panetta review’s conclusions about the enhanced interrogation program, provided years earlier to them, and the official June 27, 2013,  response submitted by the CIA to the Senate Committee.

“Committee staff grew concerned that the CIA was knowingly providing inaccurate information to the Committee in the present day—which would be a serious offense and a deeply troubling matter for the Committee, the Congress, the White House, and our country,” writes Udall. “To preserve evidence of this potential offense, Committee securely transported a printed portion of the draft Panetta review from the CIA-leased facility to the Committee’s secure offices in the Senate.”

In March of this year Udall wrote President Obama to complain of an “unprecedented action” taken by the CIA against the Senate Intelligence  Committee which left unchallenged would undermine the Senate’s Constitutional obligation to exercise oversight and as a direct consequence  “our democracy.”

A few days later the story broke about the CIA’s unauthorized hacking into  the Intelligence Committee’s computers. Udall writes it was an illegal search “conducted out of concern that Committee staff already had access to the Panetta review, a document they were fully cleared to see. More troubling, despite admitting to the Committee that the CIA conducted the search, Director Brennan at the same time publicly referred to “spurious allegations about CIA actions that are wholly unsupported by the facts.”

At stake here is whether or not the nation’s intelligence agency was caught in wholesale violations of the U.S. Constitution, while breaking several Federal criminal laws and blowing off a standing Executive Order, all in a  Machiavellian bid to ferret out how it was Senate investigators had caught on to the evolving CIA cover story.

Udall says Brennan has declined to respond to subsequent questions about the CIA hacking escapade that targeted the Senate Committee. Instead, explains Udall, Brennan’s company lawyer, the acting CIA general counsel, has “filed a crimes report with the Department of Justice about the Committee staff’s actions to preserve the Panetta review  documents.” According to Udall this is the same general counsel “who was involved in the 2005 decision to destroy the CIA’s interrogation videotapes.”

“Of the many examples of impeding congressional oversight documented in the study, none is more striking than the decision  by CIA leaders to destroy videotapes of CIA interrogations out of a concern that Congress might discover evidence of misconduct and brutality,” wrote Maine Sen. Angus King “There is no excuse for this decision and those involved should no longer be associated with the CIA or the United states government.”

“In its official response to the study, the CIA contradicts many of its previous claims of unqualified effectiveness by arguing that it is now “unknowable” whether the use of enhanced interrogation techniques and further contends that its past assertions were “sincerely believed but inherently speculative,” writes King.  “Yet in the long and unfortunate history of this program, no one in the CIA’s leadership expressed such an equivocal view  of the techniques’ effectiveness. What was once certain is now 'unknowable;' this migration of rationales underlines for me the magnitude of the prior misrepresentations.”

For Maine Sen. Susan Collins the debate over the CIA’s EIT program’s effectiveness obscures the deeper issues raised by the existence of the CIA program in the first place.

It bears repeating that torture need not be ineffective to be wrong. The United States correctly answered the question of whether torture should be prohibited when our nation ratified the Convention Against Torture in 1994. The prohibition  against torture in both US law and international law is not based on an evaluation of efficacy at eliciting information. Rather, the prohibition was put in place  because torture is immoral and contrary to our values.

Unfortunately, nothing in the response to the Senate report by  current CIA Director John Brennan had anywhere near the moral clarity found in Collins' assessment.  Brennan, who has been a critical adviser to President Obama, held a very unusual 45-minute press conference at CIA headquarters to respond to the report’s release.

Brennan opened his appearance with a very dramatic recitation of the bloody events on Sept. 11 and described a  post 9/11 CIA in a situation where “there were no easy answers” and concern over preventing a potential  second series of attacks was of paramount concern. During that period Brennan himself was the CIA’s deputy director.

Brennan went to great lengths to  distance himself from the program and his time at the agency, which coincided with its creation and operation. “I was aware of the detention interrogation program. I had some visibility into some of the activities that were there. I was not in the chain of command. I did not have authority over the implementation of that program or the management oversight over it.”

Brennan recounted that early on in President Obama’s first term the president denounced the EIT tactics as “contrary” to American values and “unequivocally  banned them.”  Brennan said he also found them “abhorrent.” Yet on the critical question of their use down the line  he said he would “defer to the policymakers in future times” as to whether the CIA should ever revert back to its EIT playbook.

Director Brennan also took issue with the Senate Committee report’s findings that EITs failed to produce worthwhile intelligence. “There was information  obtained subsequent to the application of EITs from detainees  that was useful in the bin Laden operation,” Brennan insisted.

As for the decision by his colleagues back in 2005 to destroy all of those videotapes of the Agency’s EIT handiwork in action, he refused to second-guess his colleagues. “I think that has all been looked at quite a bit over the years,” Brennan told reporters.

The 500-plus pages of the Senate Committee report that was publicly released is less than 10 percent of the more than 6,000 pages compiled by the panel’s investigators, the remainder of which remains classified. No telling when we will get to read it. Consider that the full text of the Vietnam era Pentagon Papers did not see the full light of day until 2011.