2014's best of the literary Web: From "Mansplanation Nation" to "The Original 'Gone Girl'" 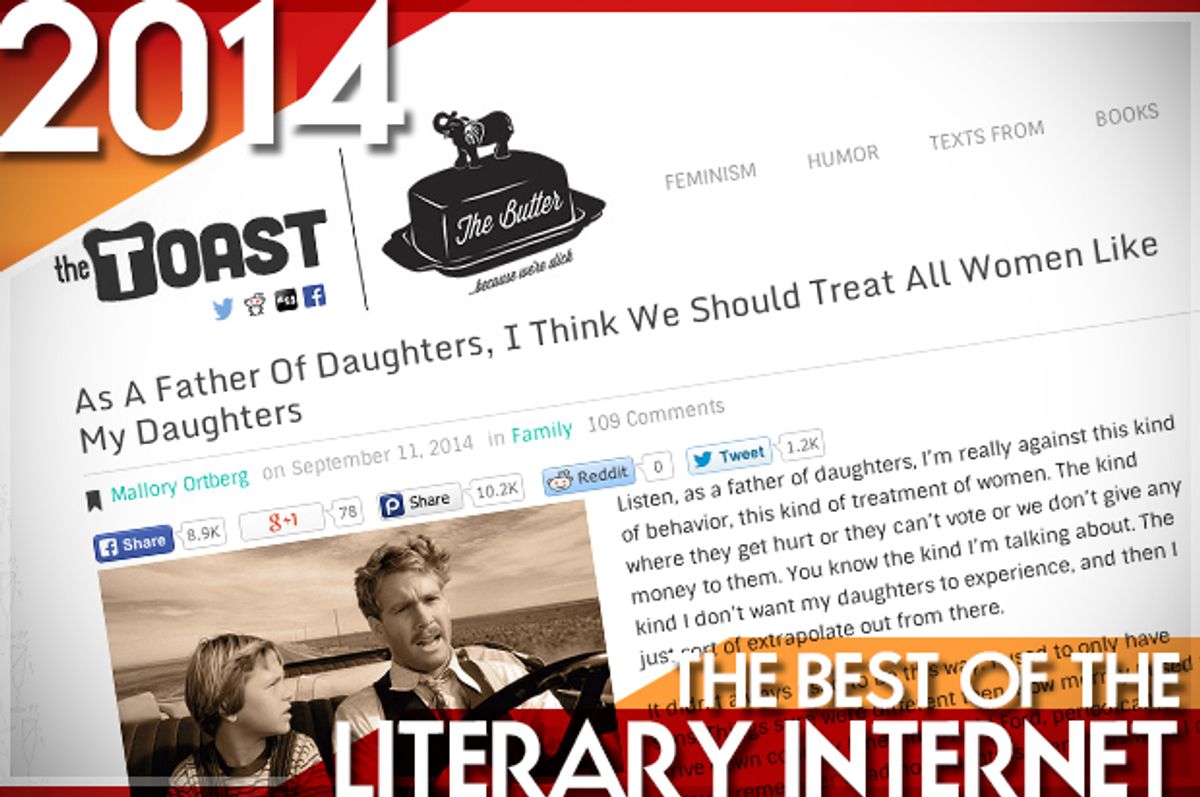 The line on 2014 is that it has seen a blossoming of serious essayists, particularly women writing autobiographically. The other line is that the Internet has spawned a flood of half-baked personal pieces and hot takes, writings whose authors have no time to consider or polish their work before they're forced to move on to the fifth story they're expected to produce that day.

There's truth to both views, but it's hardly the whole truth. Yes, much of the nonfiction written for the Internet could be better thought-out and could do with a few more passes under an editorial eye, but the Web is also a place where new and established publications can run literary essays too quirky or esoteric or just plain too long for print.

Here are few of the essays that captured my fancy this year. I make no pretensions to the definitive; no one could read everything of merit published online, and some of these appeared in print form as well. Because I'm a literary critic, I tend to gravitate toward pieces about books, writers and culture, which of course leaves vast expanses of territory uncovered. I also tend to prize stylish writing, criticism and ideas over feature reporting on weighty subjects -- but not always. Besides, the best essays can give us a new perspective on the most familiar and seeming mundane themes. One thing I attest to: Each of these essays, in one way or another, left my mind and heart a little richer.

"Orwell's World" by Robert Butler for Intelligent Life
George Orwell has become an icon of the modern writer as necessary truth-teller. This excellent piece of biographical criticism explains why and how.

"The Original 'Gone Girl': On Daphne du Maurier and Her 'Rebecca'" by Carrie Frye, for the Gawker Review of Books
As short-lived as a mayfly, the much-mourned GARB proved its mettle by offering one of today's most delightful critics on one of yesterday's most delightful novelists and the unconventional life behind her most famous book.

"As A Father Of Daughters, I Think We Should Treat All Women Like My Daughters" by Mallory Ortberg, for the Toast
Something by Mallory Ortberg, the funniest writer on the Internet, is obviously a must -- but which piece to pick? Oh, the riches! Ortberg's got multiple running riffs on her web site, the Toast, from captions appended to old paintings ("Women Having a Terrible Time at Parties in Western Art History") to her justly celebrated "Dirtbag" series ("Dirtbag Zeus," "Dirtbag Hamlet" and, yes, "Dirtbag Paul Atriedes"!). But this is the piece that best embodies Ortberg's, faux-naive, blood-drawing wit.

"Modern Library Revue #43: Dance to the Music of Time" by Lydia Kiesling
Thrilled as I am that Kiesling has become a frequent contributor to Salon, nothing can supplant in my heart her long-running series of pieces on the Modern Library for the Millions. Reading Powell's series of novels surveying one man's life in the 20th century coincided with Kiesling's pregnancy, and the interplay between the two drawn-out experiences makes this essay particularly memorable.

"The Truth About Anonymous’s Activism" by Adrian Chen, for the Nation
Chen is a journalist specializing in Internet culture who consistently exposes the excesses of its most egregious braggarts and self-styled renegades. Here he reviews a largely admiring book about the swaggering hackers of Anonymous. By the time he's done, all that's left is a rag, a bone and bedraggled Guy Fawkes mask.

"Black Body: Rereading James Baldwin’s 'Stranger in the Village'" by Teju Cole for the NewYorker.com
On what would have been Baldwin's 90th birthday, the Nigerian-American novelist visits the Swiss town where Baldwin wrote one of his most famous essays

"What Muriel Spark Saw" by Parul Sehgal for the NewYorker.com
A short celebration of the elusive author of "The Prime of Miss Jean Brodie" that deftly evokes the astringent flavor of her fiction.

"Gilding the Small Screen: or, 'Is it just me or did TV get good all of a sudden?'" by Javier Grillo-Marxuach for the Los Angeles Review of Books
Grillo-Marxuach, who has written for "Lost" and many other series, has a startling, but convincing theory: "Every show of the Second Golden Age of television is essentially 'Kramer vs. Kramer': a sustained exploration of the consequences of divorce — and absent and abandoning parenting — on the now-grown children of the first generation to experience it as a widespread social custom."

"The Future of the Culture Wars is Here, and It's Gamergate" by Kyle Wagner, for Deadspin
A patiently honed and crafted essay has its pleasures, but there are times when a more urgent blog post is what's called for -- like when a bizarre eruption takes over the Internet and a smart, articulate writer has been thinking hard about the forces behind it for a long time.

"Why Innocent People Plead Guilty" by Jed S. Rakoff, for the New York Review of Books
A U.S. district judge explains how the criminal justice system "bears little relationship to what the Founding Fathers contemplated, what the movies and television portray, or what the average American believes." Essential reading at a time when factors ranging from outrageous grand jury decisions to the podcast "Serial" have drawn attention to the courts and their workings.

The Instagram feed of journalist Jeff Sharlet
In September, Sharlet, a magazine feature writer, began to take portraits of people he met during his insomniac forays to a 24-hour donut shop. The images are paired with long captions to become mini-profiles of nightshift workers and street characters, a form some call the "InstaEssay." The best way to read them is as they unfold, informal and immediate. "It’s not the news," Sharlet wrote for a Long Form collection of his nightshift shots. "It’s not journalism in any conventional sense. It’s, Look at this! It’s, I saw these people, and I wanted you to see them, too."

"The Real Mr. Difficult, or Why Cthulhu Threatens to Destroy the Canon, Self-Interested Literary Essayists, and the Universe Itself. Finally" by Nick Mamatas, for the Los Angeles Review of Books
Mamatas makes the unlikely, audacious argument that Lovecraft was not an eccentric pulp writer of remarkably lasting appeal, but an experimental proto-postmodernist to rank with the likes of David Foster Wallace or William Gaddis. Even if you're not convinced, where else but in an essay can you enjoy the spectacle of a writer going so far out on a limb?

"An Answer to the Novel's Detractors" by Adelle Waldman for the NewYorker.com
A meticulously well-argued response to some recent complaints that the novel is inadequate to the task of describing how we live now.

"Forget About James Franco" by Bill Morris for the Millions
Morris' essays for the Millions are funny, loose-limbed and persuasive. (I owe him eternal gratitude for being the critic who finally persuaded me to read Charles Portis.) Here, he simultaneously chides and soothes those who fume over the undeserved success of celebrity novelists.

"All About My Mother" by Meghan Daum, for the Guardian
Nowadays, anyone can win likes, faves and commendations for bravery by blarfing up a raw account of some grueling or traumatizing experience on the Web, however indifferently it may be written. Daum's essay on her mother's life, illness and death, the mature product of many years of work and thought, is another creature entirely: funny, frank, stripped of self-pity and posturing. This is the personal essay at its very best.

"The Closed Mind of Richard Dawkins" by John Gray for the New Republic
This review of Dawkin's recent autobiography isn't the only piece to observe the ways that the biologist, in his inquisitorial campaign against religion, has made a false idol out of science itself. It's just the best-written, and the most comprehensively argued.

"A Better Way to Think About the Genre Debate" by Joshua Rothman for the NewYorker.com
Too much writing about contemporary literature is historically shallow, taking for granted the supremacy of the realistic novel. In this lively and much-needed corrective, Rothman resuscitates the work of Canadian literary critic Northrop Frye to illustrate the ways that pre-modernist genres like the romance and the confession are reasserting themselves in forms as diverse as science fiction and memoir.

"Find Your Beach" by Zadie Smith, for the New York Review of Books
Only a writer of genius like Smith can excavate the soul of a city -- today's Manhattan -- by staring out her window at a billboard ad for beer. A tour de force.

"The Books We Talk About (and Those We Don’t)" by Tim Parks, for the New York Review of Books
Parks' blog posts about the reading (and writing) life are always worthwhile, but some are more shapely than others. This one, about the mysterious process by which some books become a widespread topic of conversation while others, just as good if not better, don't, is particularly sharp and perceptive.