When guys find out I'm a virgin 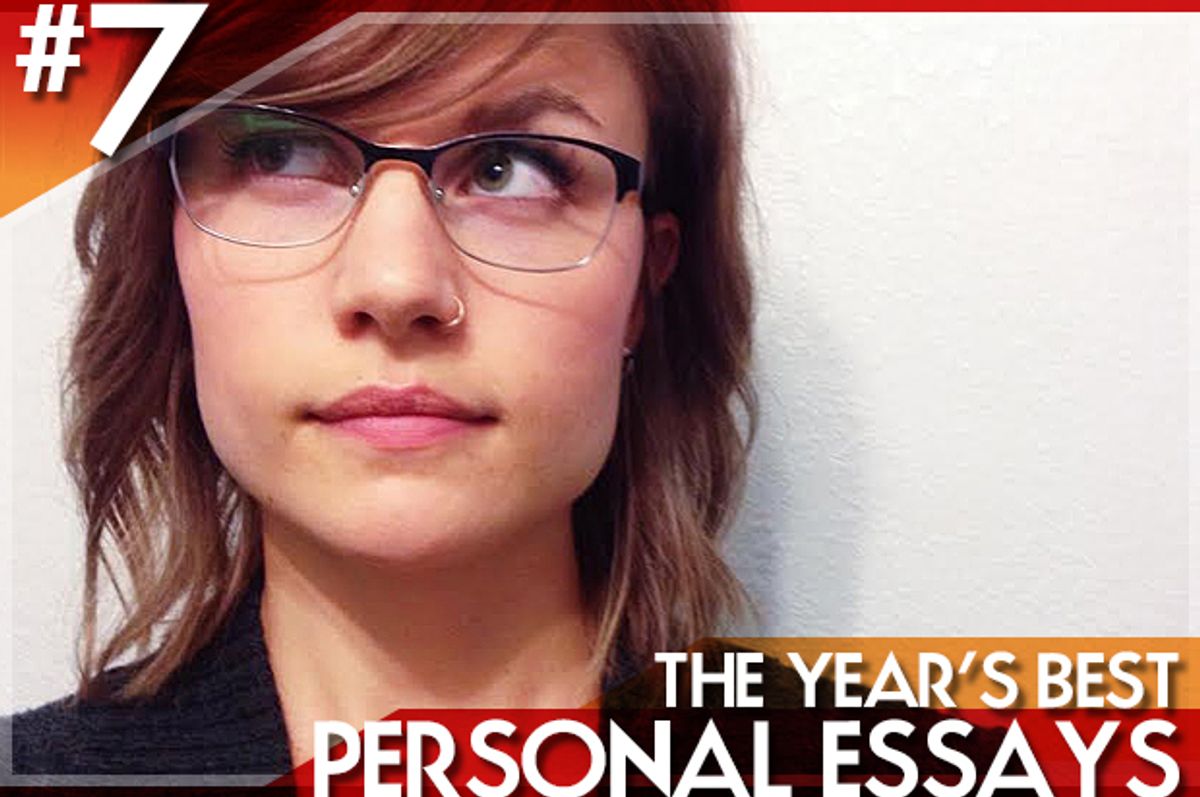 I should be better at sharing this bit of information by now. I’m a 26-year-old woman with a college degree, a good job, an adorable duplex and no debt. I have a solid group of friends, a supportive family and a clear awareness of who I am and who I want to be. By most accounts, I am a successful human being. Yet the moment I have to tell the guy I’m dating that sex is not an option, I become a squirmy, awkward, fidgety girl who can’t make eye contact or put together a complete sentence. Think junior high dance, only without a bathroom to hide in.

The Chat was never really an issue for me until three years ago. I wasn’t like many teens, who consider sex a rite of passage. It’s true I always had a crush on one (or two) boys and had my fair share of boyfriends, but no relationship ever got serious enough where sex was even a thought, let alone a deal breaker. For most of my junior high and high school years, I played the role of the friend — the token girl in a group of boys who were more interested in taking my advice for how to ask a girl to prom than taking me to prom. And given the choice between having just one boy with whom to spend all my time or a group of boys, friends trumped boyfriend.

In college there were a handful of guys who probably could have been my first, but things never quite worked out. One guy confessed to having a girlfriend back home just as I started to fall for him. Another had such low self-esteem he wouldn’t make a move until just before he passed out. The most serious contender waited until I was so smitten with him that I would break plans, skip class, call in sick — whatever — to drive hours to visit him, and then dumped me, saying it “just wasn’t a good time for him.”

Another reason sex didn’t factor into my coming-of-age years is that I’m a Christian. Not a Bible-thumping, the-world-is-going-to-hell-in-a-handbasket Christian, but a (sexually) conservative, Bible-believing, traditionally raised Minnesota Lutheran girl who was taught that sex is for marriage and that’s that. Heck, the first time I even heard of a blow job was when I threw a party in eighth grade and my mom caught a girl going down on a guy in our basement. She was shockingly cool about it (which is saying something: my mom was the Mom of all Moms; the woman all my friends feared, revered and secretly worshiped) and let the party play out until everyone had gone home. Then all hell broke loose — at least that’s how it seemed to my eighth-grade, never-been-kissed self. She sat me down at the kitchen table, folded her hands, looked me straight in the eyes and said, “Let’s talk about oral sex.” I’d thought the birds-and-bees talk was painful; this was torture.

I don’t know whether it was hearing my mom explain the basics of oral sex, the embarrassment of having not previously known about this particular genre or the fact that she caught two of my friends actually engaging in this in my basement, but let’s just say I never fully recovered from that centuries-long five-minute conversation.

Something else that has kept my pants on all these years: Despite my Miss Independent, one-of-the-guys, often cynical/always logical demeanor, I am a hopeless romantic. I believe wholeheartedly that sex and love should coexist. In fact, I believe they need to coexist; that without love, sex is just a Band-Aid fix for something that should be addressed with words rather than walks of shame. What’s more, I’m an obnoxiously picky person who avoids letting go of control, being vulnerable and making mistakes at all costs — a by-the-book Type-A perfectionist. The longer I go without sex, the more build-up there is: the more anxiety and curiosity, fear and desire, anticipation and uncertainty. Basically, what was once just another bit of my identity has, over 26 years, become a defining element of who I am, whether I like it or not.

Despite what you may think, abstaining has not made me a miserable, lonely, pleasure-deprived shell of a person. Nor am I anti-sex. In fact, I’m all for sex — from what I’ve heard, it’s fantastic! Life-changing! Glorious! (At least when it’s good.) I cannot wait to have sex someday. Right now, however, I appreciate — and even take pride in — my virginity. It separates me from other women. Not in an “I’m better than them” way, but in the same way that being taller than most makes someone unique, or having two different-colored eyes. As for The Chat, I’ve found that over time it’s become more of a Dude Decoder than Relationship Wrecker. Let me explain.

Every guy reacts differently to the No Sex bomb. Some play it cool while calculating how to coerce me into changing my mind. (This usually involves the showing off of foreplay moves, tales of the extreme pleasures I’ve been missing and/or purring that they don’t mind waiting — unless it’s going to be, like, two years, in which case they’re not so sure.) Some bail immediately. Some fake acceptance — and then bail a few dates later. And some truly give celibacy their best shot before breaking down and, yep, bailing.

That’s what happened three years ago with Boy One. At the time of The Chat, Boy One and I had been on two official dates, but had liked each other for a lot longer. We were making out on my couch when he went to unbutton my jeans — which was about seven steps beyond what I was ready for, and my body language told him as much. He awkwardly apologized, I awkwardly said it was fine, and we kept kissing, awkwardly. Instead of just sucking it up and telling Boy One why I was being so weird, I decided to be extremely mature and wait until he had left to text him asking if we could talk. He called me and I spent the next half-hour mumbling and stuttering out the truth. I don’t remember his exact reaction, but it was something along the lines of, “It’s not a big deal, why didn’t you just tell me?” At which point I felt relieved, foolish and annoyed with myself for not having had the moxie to say something in person.

Unfortunately, because Boy One fell into the celibacy-then-bail category, it was just a matter of time — three months — before the truth came tumbling out. Our relationship ended in a drunken yelling match that spanned from my withholding physical affection (his words) to his withholding emotional intimacy (my words) to us not communicating, period. Turns out, the sex thing mattered.

Boy Two was the polar opposite of Boy One: optimistic, bubbly and more excitable than a puppy. We lasted about two months before I bailed. Sex was less of an issue this time, mostly because I knew he was my rebound (yes, I’m a terrible person). I simply told him I was waiting until marriage, didn’t see us going in that direction, and that was that.

Boy Three really threw me for a loop. He worked at my church and was completely different from anyone I’d previously dated, a fervently devout and serious Christian with cemented views on pretty much everything. At first, this was attractive: who doesn’t like a man who knows what he wants? Once I figured out what it was he wanted, however — a wife who would bear his children, iron his clothes, laugh at his jokes and agree with him at all times — it was awful.

What really shook me about Boy Three, though, wasn’t his traditional values or strict religious beliefs. The thing that threw me was how much he pressured me sexually. Unlike Boy One, who had at least respected me enough to try to abstain, this guy — this man who repeatedly told me he’d chosen to dedicate his career and life to God — forced me into the most uncomfortable sexual situations and conversations I’ve ever endured, pushing and prodding me further and further outside my comfort zone. And every time I would push back and say no, he would throw a tantrum and shut down, making me feel guilty, angry and entirely lost as to what on earth I’d gotten myself into. I stuck around far too long with Boy Three, but when I finally did leave, it was with renewed determination to hang on to my virginity, even if it meant waiting a lifetime.

Like I said before, I’m not anti-sex. I’m not immune to desire, either: It’s flattering when the man I’m with wants so badly to rip off my clothes and have his way with me that he has to leave the room in order to respect my decision. It drives me crazy when he whispers in my ear and teases me in all the right ways. And, yes, in situations like those I do waver and wonder whether or not it’s worth holding out for the big I Do.

So why do I do it? Why do I stick to my boundaries when it would feel so good to bust through them? Why have I had The Chat so many times it’s become (almost) comfortable? Why do I hang on so tightly to an antiquated lifestyle choice that’s shunned by society and makes people assume I’m a repressed prude?

I do it because after 26 years, I’ve come to realize that of all the experiences and opportunities offered in life, to love someone is the most precious. A long time ago I was taught — and chose to believe — that love and sex are intertwined in such a way that to separate them would be to lessen their value. When it comes to my decision to stay a virgin until marriage — to hold out for that one-time-only chance to fully connect with and know and love another person — I want to make sure it’s the right man.

Until then, bring on the squirmy no-sex chat.

Ellen Burkhardt is a freelance writer, researcher, traveler, and overthinker in Minneapolis, MN. Follow her @burkcity.