2014: The year country music came out 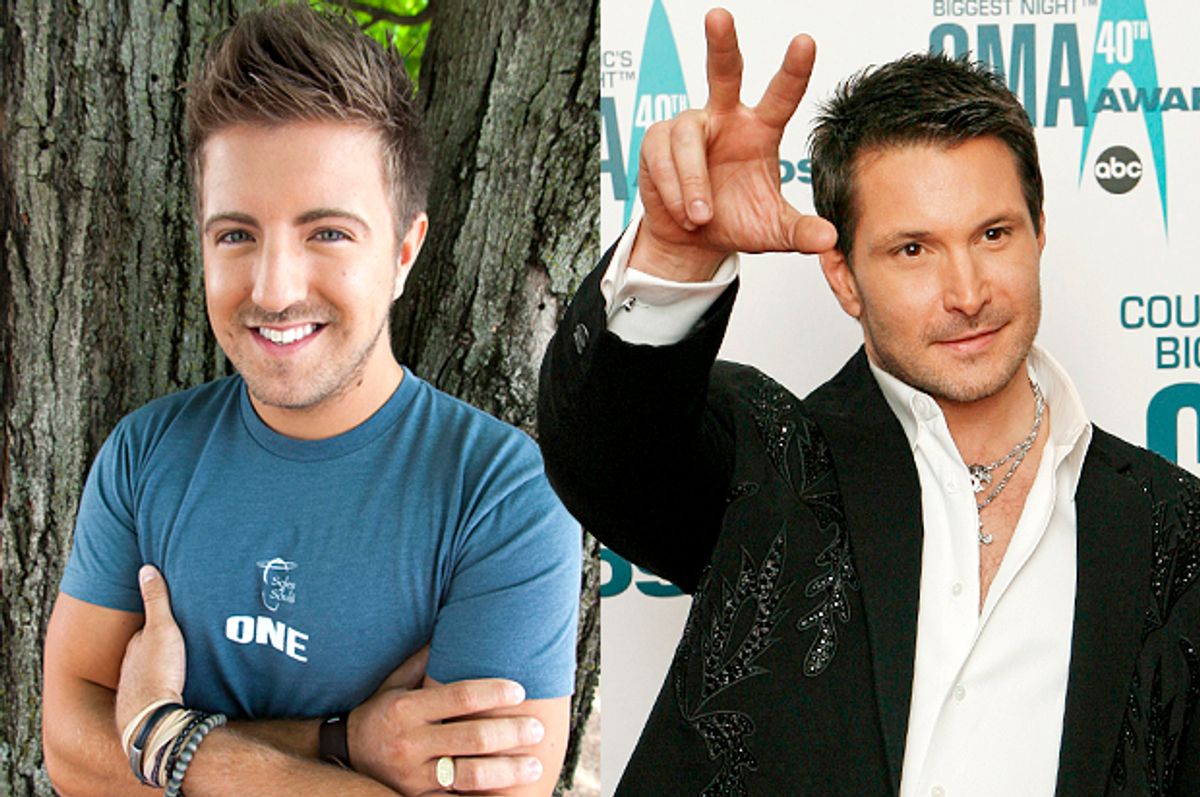 In November, breakout star Kacey Musgraves had a big night. She won Song of the Year for “Follow Your Arrow” at the Country Music Association Awards—Nashville's biggest night. Musgraves recorded and co-wrote the song, which features the gay-friendly lyrics “Kiss lots of boys/or kiss lots of girls/ if that’s something you’re into.” A CMA award is a hearty endorsement from the industry, and the fact that its voters weren’t put off by the lyrics—possibly because they were sung by a straight woman—might have helped ease Ty Herndon’s nerves. Just a couple of weeks later, Herndon became the first mainstream male country star to come out, as he told People magazine, as a “proud gay man.” The 52-year-old artist, who recently walked a red carpet with his partner of five years, inspired country singer and former child star Billy Gilman to post a video announcement of his own coming out the next day. One more and it would have been a trend.

Country music hasn’t had this exciting of a year in LGBT news since 2010, when Chely Wright became the first mainstream Nashville star to come out. Wright’s coming out was a carefully-orchestrated media circus, complete with a tell-all memoir, chronicled extensively in the 2011 documentary “Wish Me Away.” As a trailblazer, Wright weathered criticism, death threats, and a quiet industry freeze-out after her announcement. So far, Herndon and Gilman haven't faced the same scrutiny.

Nashville veteran and outspoken LGBT ally LeAnn Rimes voiced her support for Herndon in a recent interview with GLAAD All-Access, saying that she hopes his and Gilman’s announcements mean that the industry itself is becoming more progressive. “I hope we’re moving forward and not back,” said Rimes.

She’s not alone. Nashville stars now routinely express their support for the LGBT community in the press, even though how they voice that support can still make headlines. When Carrie Underwood cited Christianity as shaping her progressive views on marriage equality in 2012, some right-wing Christian groups were furious. When you scratch the superstar surface, you’ll find LGBT insiders just like in other entertainment industries, including “Follow Your Arrow” co-writers Brandy Clark (whose own new Los Angeles-made album is gathering acclaim) and Shane McAnally, well-known Nashville songwriters who are both out. In a landscape where even a Red State poster boy like Toby Keith can be blasé about gay marriage (“I never saw the reasoning behind getting in people’s personal lives.”), it’s clear that being an explicitly outspoken proponent of LGBT rights and issues and being a mainstream country star are not mutually exclusive.

Some of that is surely due to how much has changed just in the last four years. 2010 saw the beginnings of the dismantling of marriage discrimination at the federal level when the Defense of Marriage Act was declared unconstitutional. States began passing civil union laws and striking down same-sex marriage bans. Support for same-sex marriage has now surpassed opposition. In a November column for Out & About Nashville, managing digital editor Joseph Brant wrote that for the most part, the people who make up the country music industry aren’t homophobic.

“The country industry is a business, and so it directs its product to a target audience, which for a long time has been assumed to be suburban women between 30-45 years old (and only recently has that assumption been changed to Females 18-24),” Brant wrote. “If those women, in either and both age categories, have been trained to believe their male country stars have to be sex symbols as much as the female country stars have to be non-threatening, then there is conceivably no place for a gay male country performer.”

That perception, Brant said in a recent email exchange, is changing, in part because younger people in general are pro-gay marriage, and Nashville is working hard to attract younger listeners.

“The intention, of course, isn't to bring acceptance of gay people to the genre, but it will be a side benefit,” said Brant, pointing to how Billboard’s inclusion of digital sales and online streams has affected country’s chasing of crossover acts that appeal to youth.

Ty Herndon and Billy Gilman aren’t likely to set the 18-24 demographic on fire these days, but the industry’s reaction sets the tone for future acts to follow suit. Like Wright, Ty Herndon and Billy Gilman were once household names, at least among country listeners, who’ve fallen out of the spotlight in recent years. Herndon’s heyday was the Nineties, though he did receive a Grammy nomination in 2010 for an album of Christian contemporary songs. Gilman, a former child star, is more than half Herndon’s age, but he hasn’t released an album since 2006.

Chipping away at taboos that are based on sales and marketing rather than actual beliefs is a slow process. In some ways, it’s easier to argue with morality than money. Herndon and Gilman might be minor voices these days and so their comings out aren’t the bombshells that a current Top 10 artist’s would be, but progress can start small. Whatever they decide to do now—Herndon apparently has an album on the way—their renewed profiles will at least give them a boost with audiences who might not have otherwise noticed.

When Herndon came out, he also spoke about his two previous marriages to women in his interview. “It was unfortunate that I had to do that, but I felt that's what I had to do to have my career.” That part of Herndon’s story is similar to a struggle playing out in primetime on the fictional ABC show “Nashville,” a soapy drama about the lives of established and emerging country stars. In an ongoing plot, a rising star named Will goes to great lengths to play straight, even marrying a female artist so he can maintain his heartthrob image.

The conventional wisdom of fictional “Nashville” had been mirroring that of Nashville itself (the industry, not the town)—that the bulk of mainstream country music fans just aren’t ready for openly-gay artists. But for how much longer will that wisdom ring true? It will be interesting to see what the show writers, who know the actual Nashville so well, do with Will’s character in 2015. The show could stay true to life and keep Will in the closet, growing more depressed and self-destructive as he lives a life he both wants and hates. Or he could come out—to himself, to his label, to the world—and see how fans react. Fiction is said to improve empathy, right? A groundswell of fan support for fictional Will’s coming out could signal another significant turning of the tide for the real Nashville and its fans.