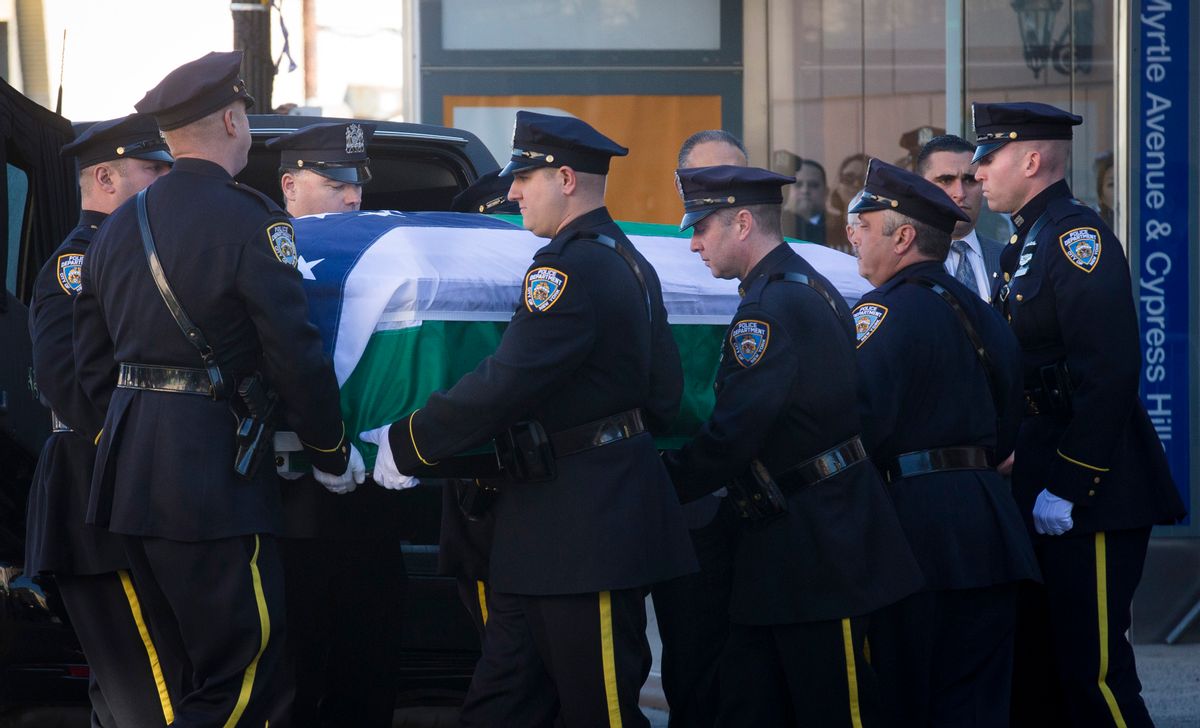 New York City police officers carry the casket of New York Police Department officer Rafael Ramos at his wake at Christ Tabernacle Church, in the Glendale section of Queens, where he was a member, Friday, Dec. 26, 2014, in New York. Ramos was killed Dec. 20 along with his partner, Officer Wenjian Liu, as they sat in their patrol car in Brooklyn. The shooter, Ismaaiyl Brinsley, later killed himself. (AP Photo/John Minchillo) (AP)
--

Two New York Police Department officers were ambushed last weekend by Ismaaiyl Brinsley after he had made threatening posts online, including references to high-profile cases of white police officers killing unarmed black men and a vow to put "wings on pigs." After shooting the officers, Brinsley ran into a Brooklyn subway station and committed suicide.

The killings of Officers Wenjian Liu and Rafael Ramos have raised concerns in the already tense nationwide debate surrounding police conduct. Some key developments since the officers' killings:

Hundreds of uniformed officers and other mourners gathered Friday at Ramos' viewing at Christ Tabernacle Church in Queens, where he was a longstanding and deeply committed member, family members said.

Dozens of officers saluted as his flag-draped casket was carried into the church shortly before 2 p.m.

His funeral is scheduled to be held there Saturday; Vice President Joe Biden has said he will attend.

Liu's funeral arrangements have yet to be announced.

The banner, which was first spotted above the Hudson River around 9 a.m., read "De Blasio, our backs have turned to you." The sign evoked the NYPD officers and police union leaders who turned their backs to the mayor at a hospital last week after the officers were fatally shot.

Former police officer-turned-activist John Cardillo said that "hundreds" of retired and current officers paid to have the banner flown.

A de Blasio spokesman condemned the banner. "This is a time to think about the families and honor our fallen officers," Wiley Norvell said. "Dividing people won't help our city heal."

PRAYERS AND SUPPORT FOR SLAIN OFFICERS

The Rev. Al Sharpton and the mother and widow of Eric Garner, an unarmed black man who died after what a medical examiner determined was a white officer's chokehold, prayed for the families of the two slain officers at a Christmas dinner event.

The Garner family observed a moment of silence and prayed while serving meals and handing out toys with Sharpton at the Harlem headquarters of his National Action Network.

WABC-TV said widow Esaw Garner told the crowd she shares in the families' suffering and would be more than happy to meet them.

Authorities say Brinsley had referenced Garner's death on Instagram before shooting the officers.

In a holiday statement, Gov. Andrew Cuomo mentioned the slain officers and urged people to "offer support to their families any way we can."

RALLIES, FOR AND AGAINST POLICE

A Cleveland police dispatcher who organized a rally scheduled for Saturday in support of officers and invited 500 friends to it says thousands of people plan to attend.

Mary Jo Graves decided last Sunday to organize the Sea of Blue Support rally on Cleveland's Public Square by creating a page on Facebook and inviting her friends. She said Thursday that more than 54,000 invites have been sent across the social media website and 4,000 people have indicated they plan to be there.

"I was hoping to get 100 people to stand with me at Public Square in support of officers, and it kind of blew up," said Graves, who spent nearly 14 years as a Cleveland police dispatcher and the last six in suburban Brooklyn.

There have been protests across the country since grand juries declined to indict white police officers involved in the killings of Michael Brown in Ferguson, Missouri, and Garner. The fatal shooting of a 12-year-old Cleveland boy who was carrying a pellet gun has prompted numerous protests, including one that shut down a freeway at rush hour.

In Oakland, California, protesters smashed business windows on the edge of downtown and tore ornaments and lights from a large Christmas tree in a protest designed to keep police working on the holiday.

The protest was called "No Time Off." Another demonstration was planned for Friday in downtown San Francisco.