The year in Clickhole: This was 2014's best website

From "DO NOT PUB" to "Which one of my garbage sons are you?", our favorite Clickhole stories from 2014 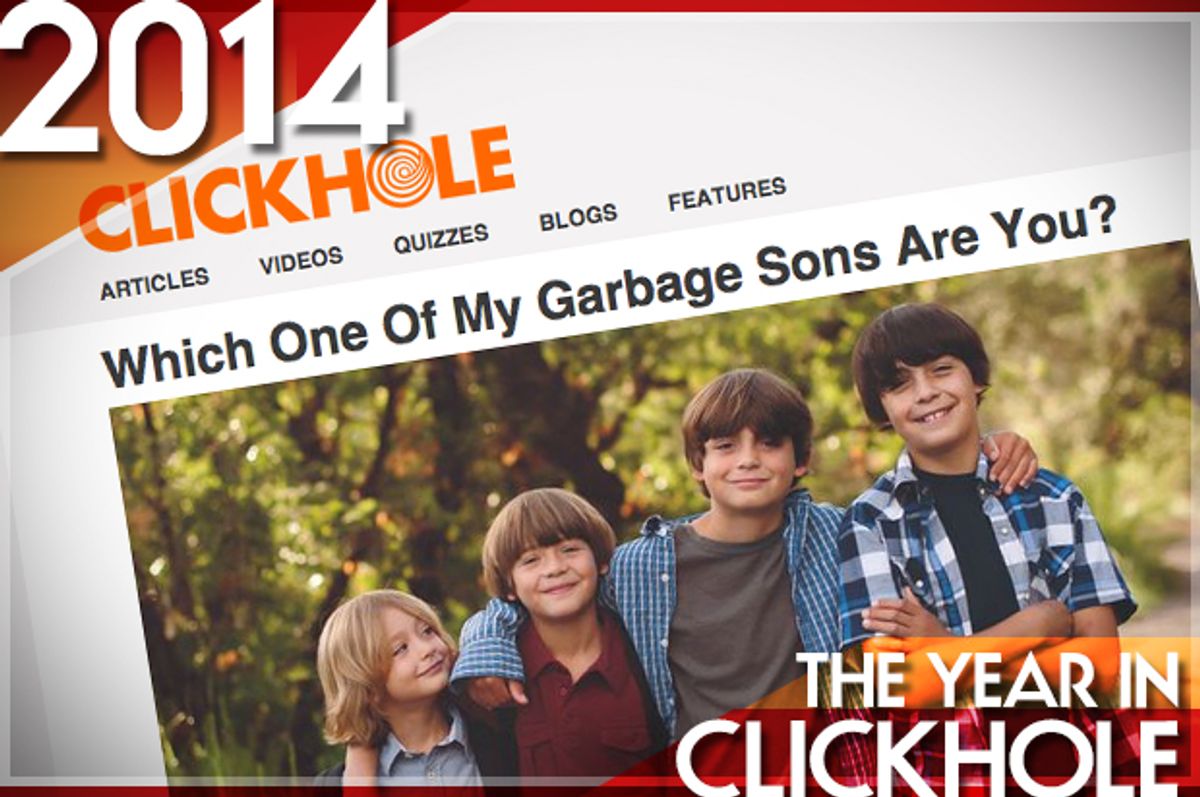 Clickhole, the Onion's parody of viral content sites like Buzzfeed and Upworthy, was one of this year's biggest online success stories. A pitch-perfect sendup of the current clickbait-dominated media landscape, Clickhole is also very, very funny. In fact, it's so consistently funny that there's no way even the most devoted readers could have caught all the good stuff. Here are 13 of our favorite stories from the year that you may have missed:

11. "6 Billionaires And Their Fucking Sons"
"Here’s the founder of Dell Inc. He’s valued at $15.9 billion. And there’s his goddamn son. Fucking typical."

9. "As A Freshman, I Didn’t Know Who I Was, Had No Long-Term Memories, Was Covered In Unexplained Tattoos, And That’s Okay"
"Thinking back, what stressed me out most were all the unanswered questions: Am I already hurting myself by taking the wrong first semester courses? Where was I born? Who is Katya? Why do I keep having daytime visions in which I am pursued through a metal-walled forest compound at night by a tall, muscular man apparently called Vlad? In short, how do I make my way through this crazy thing we call “college”?"

8. "This Video Seems Silly, But It Makes A Good Point"

6. "I Never Understood My Father Until I Traveled Through Time And Became Him"
"To be totally honest, before I warped through space-time to instantaneously voyage to 1972 to meet, court, marry, and impregnate the woman who would become my mother, I just thought that my father was an irrationally cruel and cranky man. But as I experienced everything my father did and gradually felt the pressures of raising myself as a child, I began to see the world through his eyes."

5. “Which Blade of Grass are you?"
We got: "You are a blade of saw-tooth lovegrass growing in a savannah of Mozambique. You have grown as tall as 15 inches, though your typical height usually hovers around 8 inches due to the frequent grazing of the savannah’s many herbivores. You are roughly .08 inches wide. Notable neighbors include Blade #33,060,118, more commonly known throughout the world as “The Dominator.”

4. "Which One Of My Garbage Sons Are You?"
We got: "Terrible tidings for you: You are the dreaded Laramie. You are a junk son if I’ve ever seen one—a true dump child from the swamp. Everyone who knows you fears you because they are aware that you make life sour. Your interests include loud crimes with minimal jail sentences, making nighttime last longer, and watching movies where someone who looks like your nice dad explodes or gets killed by a mummy."

3. "How Well Do You Know The Lyrics To The ‘Fresh Prince Of Bel-Air’ Theme Song?"
“When a couple of goblins who were up to no good / Started making statues of goblins in my neighborhood.”

2. "6 American Television Shows That Started In England"
"Before bringing the acclaimed sitcom to American audiences, Jerry Seinfeld and Larry David were famously inspired by the British sitcom Just A Moment Dear, I’ll Buzz You In, a show about a British accountant named Jerry Christianson who would get into a series of comical adventures with his best friend, George Church, his ex-girlfriend, Elaine McCarthy, and his zany neighbor, Sergeant Cosmo Kramer, a veteran of World War II. "

1. "The Time I Spent On A Commercial Whaling Ship Totally Changed My Perspective On The World.”