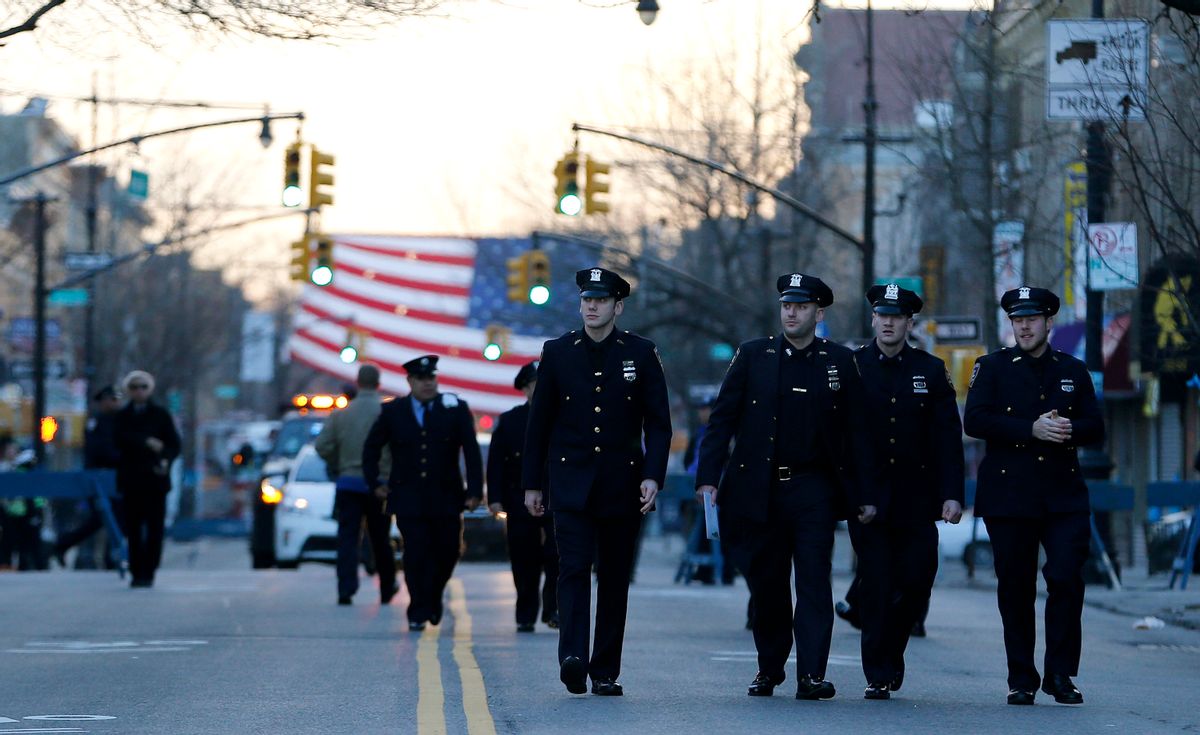 New York City police officers walk toward Christ Tabernacle Church before funeral services for officer Rafael Ramos at in the Glendale section of Queens, Saturday, Dec. 27, 2014, in New York. Ramos and his partner, officer Wenjian Liu, were killed Dec. 20 as they sat in their patrol car on a Brooklyn street. The shooter, Ismaaiyl Brinsley, later killed himself. (AP Photo/Julio Cortez) (AP)
--

The killings of two unarmed blacks by white police officers in Missouri and New York this summer touched off protests and a national debate over police conduct that intensified after grand juries refused to indict the officers.

Tensions escalated further after two New York City police officers were killed a week ago by a man who suggested in online posts that their deaths were in retaliation for the deaths of Michael Brown in Ferguson, Missouri, and Eric Garner in New York City. The gunman committed suicide.

Some key developments in the aftermath of the tragedies:

Vice President Joe Biden and New York City Mayor Bill de Blasio spoke Saturday at the funeral for Officer Rafael Ramos, who was shot to death a week ago along with his partner. Thousands of officers from across the nation packed a church and spilled onto streets to honor Ramos.

De Blasio has been criticized by the police union for his handling of protests in the wake of Garner's death and the subsequent grand jury decision. Mourners inside the church applauded politely as de Blasio spoke, but hundreds of officers outside turned their backs on giant screens showing the mayor.

Funeral plans for Ramos' partner, Officer Wenjian Liu, have yet to be announced.

A "Sea of Blue" demonstration Saturday in downtown Cleveland drew several thousand people, a surprise to area police dispatcher Mary Jo Graves, who created the event and promoted it with a Facebook page. Many in the crowd wore blue as requested, walking silently from Public Square to a police memorial park to honor Ramos.

Cleveland has seen a number of anti-police protests recently, some prompted by the Nov. 21 fatal shooting of 12-year-old Tamir Rice, who was holding a pellet gun when a police car responded to a report of a man with a gun.

Elsewhere, more than 200 people gathered in downtown Denver to support police officers Saturday. The day before, 50 people turned out for a "Blue Lives Matter Too" rally in Dubuque, Iowa, and another 200 gathered in Atlantic City, New Jersey.

About 200 people attended a rally Saturday in Chicago with the Rev. Jesse Jackson, including many who came from Milwaukee to protest the April death of a black man who was shot by a white officer.

Former Milwaukee officer Christopher Manney shot Dontre Hamilton 14 times in a downtown park. Manney was fired in October for ignoring department policy, but the county district attorney announced Monday that he would not file charges because he said Manney acted in self-defense.

Hamilton's family members, who attended the rally, have said the 31-year-old suffered from schizophrenia. Jackson told the crowd, "We cannot stand by and let this happen without saying something." Federal investigators have said they'll look into the shooting.

A protester who advocated for peaceful demonstrations in Ferguson, Missouri, was charged Saturday with setting fire to a convenience store after another fatal police shooting this week in nearby Berkeley.

The Mendocino High School boys and girls basketball teams were uninvited from a tournament in northern California because of concerns the players would wear "I Can't Breathe" T-shirts while warming up.

The boys team was reinstated after all but one player agreed not to wear the shirts anywhere on the campus, according to the Mendocino Unified School District Superintendent, but too few girls accepted the condition to field a squad.

Garner, who was put in a chokehold by an officer, was heard gasping, "I can't breathe" before he lost consciousness and later died.

The three-day tournament will start Monday.