From domestic violence jokes to the Auschwitz selfie, viral tweets showed us the awful side of social media 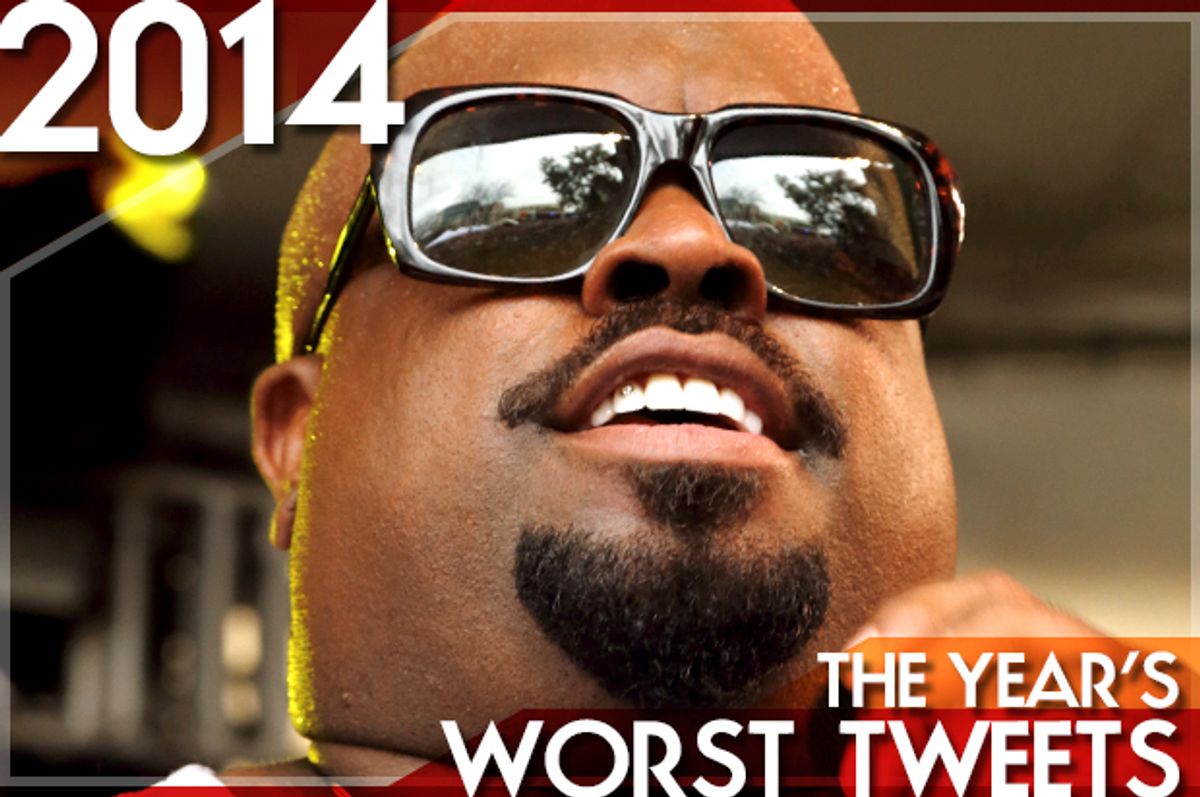 Last month, Twitter made it easier to find old embarrassing and awful tweets with the release of its first complete index. Now, every public tweet posted since 2006 is completely searchable. But you don’t have to go far in the wayback machine to find tone-deaf and clueless mishandlings of social media—Twitter, with all its viral power, will bring them to you, even if they dirty-delete the evidence later. Here are the worst tweets of 2014, from the boorish to the truly horrifying.

The "better to burn out than to fade away"

Staffing an airline Twitter account is one of the worst social media jobs imaginable. People with nothing but iPhones, time and irritation @-yelling about canceled flights, missed connections and damaged luggage — the job carries definite burn-out risks, and it's a wonder more online customer service agents don't snap. In April, the official US Airways account committed what’s been called “the most epic corporate social media fuckup ever” when it posted a photo (screen-grabs seriously NSFW) of a naked woman using a model airplane as a dildo during what looked like a routine customer service conversation. Cue a million jokes about getting screwed by a late flight.

In a year that saw the graphic October murder of a citizen journalist in Mexico by a drug cartel and the August beheading of journalist James Foley by ISIS spread on Twitter, a so-called ISIS parody account using tragedies like the recent Taliban massacre at a Peshawar school to poke fun at jihadi extremists is in spectacularly poor taste.

We never killed 120 children at once. Only 100. Apparently Taliban has smaller penis than we do& this makes them more angry. #PakSchoolSiege — Islamic State Media (@ISIS_Med) December 16, 2014

An argument for the liberal arts

People who don’t know their history are doomed to name their stupid companies after lynching metaphors. In a stunningly stupid move, an Austin, Texas-based foodie PR firm appropriated the title to Billie Holiday’s iconic anti-lynching song and then bleated enthusiasm for their hospitality PR brand all over Twitter. Apparently the owners missed those crucial chapters in American history, jazz appreciation, and basic common sense. The firm left Twitter, then renamed itself.

Twitter helped spread the weirdest rumor of 2014—that John Green, author of the incredibly popular YA romance “The Fault In Our Stars,” is actually the Zodiac killer. High school English teachers are probably already raking in the think pieces, er, term papers on this one.

the fact that john green said that he's not the zodiac killer. that's exactly what the real zodiac killer would say. nice try, green

The St. Louis Police Department, already under scrutiny as nearby suburb Ferguson, Missouri in the wake of the grand jury decision not to indict Ferguson police officer Darren Wilson for the shooting death of Michael Brown, caught fire for an insanely ill-conceived tweet about Cleveland police shooting Tamir Rice as he played with a toy gun. The tweet's "Kids will be Kids?" headline certainly looked to many like the SLPD were blaming Rice, who was 12 years old when he was killed, for his own death.

She has since deleted her Twitter account, but who can forget the time the PR chief of IAC tweeted this ("Going to Africa. Hope I don't get AIDS. Just kidding. I'm white!") right before boarding a plane? By the time she landed, Twitter had blown up and #HasJustineLandedYet had become a trending topic.

The smiling face of a young woman’s gleeful selfie at Auschwitz went viral over the summer. While the selfie itself seemed innocent, if completely boneheaded, her cynical follow-up is an expert trolling of her critics.

If my future husband doesn't propose to me at Auschwitz then I'm gonna say no. — Princess Breanna (@PrincessBMM) July 23, 2014

“I remember when I lost my mind”

In August, among a flurry of defensive tweets regarding charges that he drugged a woman in 2012 without her consent, CeeLo Green tweeted a real knee-slapper of a “legitimate rape” joke: “women who have been really raped REMEMBER!!!!” He then quit Twitter, only to rejoin shortly thereafter with all of the offending tweets scrubbed. He’s kept a low profile since.

Prolific author Joyce Carol Oates is also spectacularly productive (and quite often tone-deaf) on Twitter, musing on thoughts as varied as academic triggering (no time for it), cats (in favor of) and street harassment—specifically, in response to a viral catcalling video (since debunked as a staged film project), her doubt women walking wealthy streets were subjected to the same catcalls as they were in poorer neighborhoods. An absurd failure of imagination from one of our most celebrated fiction writers.

A joke tweet about a fake charity from The Colbert Report official account referencing, obliquely, Washington Redskins owner Daniel Snyder’s foundation to benefit Native Americans misfired and prompted a huge backlash. The problem? The lack of appropriate context surrounding a tweet endorsing the “Ching-Chong Ding-Dong Foundation for Sensitivity to Orientals or Whatever.” The ensuing call to get #CancelColbert to trend, sparked by digital activist Suey Park, turned into the kind of free-for-all trouncing of context and nuance, including a #GamerGate-subsidized backlash against the backlash, that only Twitter can provide.

Right before his public image took a nosedive as waves of women stepped forward to accuse the entertainment legend of drugging and/or sexually abusing them, the Cosby publicity team asked his fans to meme the Cos. Twitter obliged with a storm of ironic rape jokes that are either the best tweets or the worst tweets of the year, depending on your sensibilities. The #CosbyMeme hashtag is still going.

How did the authorities miss this? #CosbyMeme pic.twitter.com/M6Jj3tsvfs — herewego74 (@herewego74) December 3, 2014