The year in hair: How afros, wigs, and extensions took over pop culture

If there's one way 2014 introduced texture and variety to the cultural landscape, it's in the realm of hair 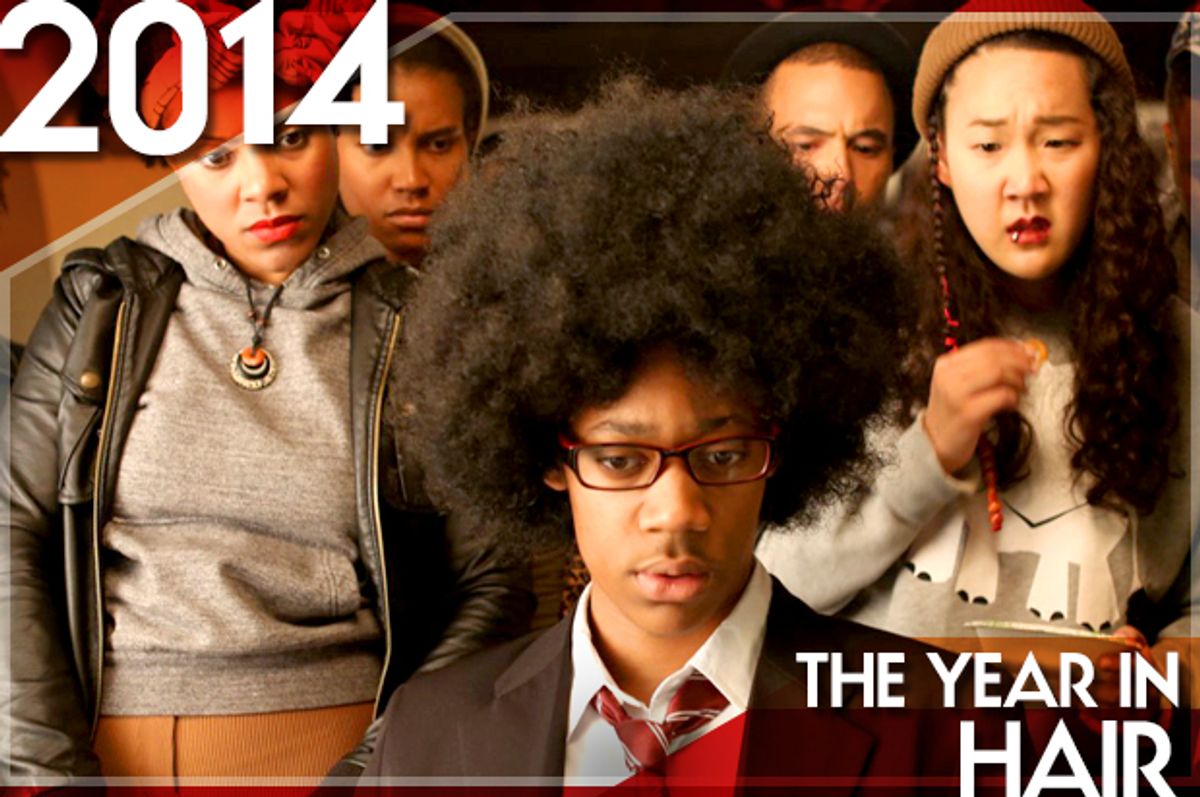 In Gina Prince-Bythewood’s film “Beyond The Lights,” one of the most unexpectedly arresting moments is a scene where the protagonist Noni, played by the extraordinarily talented Gugu Mbatha-Raw, performs the very mundane act of taking the extensions out of her hair. It’s grooming, after all—advanced grooming, maybe, as her violet, Hollywood extensions likely cost several hundred of dollars and took hours to apply to her hair. But the intimacy of the scene reveals Noni’s familiarity with this particular chore; her experience is lived-in, and her task both absorbs her and leaves her free to ruminate, the same way she might feel in the shower or behind the wheel of a car. It’s a moment for the character’s awakening to her own internal faultlines, a moment where she has the opportunity to shed the most visible shroud of artifice from her in exchange for what her hair actually looks like.

Changing a character’s appearance is a visual motif directors have leaned on since the birth of the medium—like this scene in Wes Anderson’s “The Royal Tenenbaums,” where Richie cuts his hair and shaves. It’s the attention to appearance that inspired Norma Desmond to theatrically descend the staircase, telling Mr. DeMille that she was ready for her close-up. Yet in “Beyond The Lights” it’s a storytelling device made anew, and that is because of Noni’s hair. Noni is biracial, and her hair is distinctly African. The experience of her hair is new for a lot of audiences—certainly new to me. And because her hair is a fundamental part of her, her hair is a fundamental part of the film, too. Noni’s hair is a reflection of her inner life and an expression of her mission as a musician.

The first scene of the film depicts a young Noni being driven frantically to a salon by her white mother, so that something can be “done” with her hair. “Beyond The Lights” is, on some level, an outsize version of the same journey—an attempt to bridge the gap between the mainstream, white perception of beauty and the reality of Noni’s day-to-day existence.

2014 may not have ended up being the year of diversity that some of us hoped it would be, but if there is one particular way in which it introduced texture and variety to the pop cultural landscape, it’s in the realm of hair. This year has seen attention drawn to natural hair on black women across television, from “How To Get Away With Murder” to “Black-ish.” It’s brought attention to the economy behind artificial hair via jokes on “Selfie” and storylines on “The Comeback.” It’s seen the films “Beyond The Lights” and “Dear White People,” both of which feature characters coming to terms with their ever-shifting racial identities through the canvas of their hair. After 2014, Noni’s mother wouldn’t have much of an excuse for not knowing what to do with her daughter’s hair—she would have had the chance to see its reality on-screen over and over again.

Without a doubt, the defining moment for natural hair this year was Viola Davis’ character Annalise Keating taking off her wig in “How To Get Away With Murder.” “Beyond The Lights” went for similar themes, but the film is going for quiet transformation. Davis is going for high drama—in the style of all of Shonda Rhimes’ shows, she’s going for operatic heights of emotion. And in “Let’s Get To Scooping,” she lands it: slowly stripping off not just her wig but her false eyelashes, her makeup, and the eyeliner that makes her look more “presentable.”

That moment deals with much of the same underlying themes as Justin Simien’s “Dear White People,” an independent film about black students at an Ivy League school in the weeks leading up to a blackface-themed party on campus. Simien’s film features not just one person going through a hair-related crisis of identity, though, but at least four: Lionel, a social loner with a very large afro that white people won’t stop touching; Coco, a black woman with a small collection of sleek, elegant wigs; Sam, a biracial woman whose hair is stubbornly neither white “enough” or black “enough”; and Troy, a black man trying to fit in with his white fellow students who happens to cut hair on the side. The film is partly about the black characters coming to terms with the white characters, and partly about the black characters coming to terms with each other—with the many different possible ways to identify as black. The characters’ hair becomes a stand-in for their relationship to their identity. As the story unfolds, each character chooses to transform their hair in some way—except for Troy, who tellingly chooses to not change his hair at all.

Even when pop culture didn’t actively engage with hair, it was possible to find African, natural hair in many different stories: “Black-ish” made hair a storyline in a recent episode; “Scandal” finally showed off Olivia’s natural hair in the fourth-season premiere; and the updated production of “Annie,” which, in engaging with both star Quvenzhané Wallis’ hair and the original, all-white production, opens up all kinds of implications, potentially fascinating and problematic. “Seeing a white woman comfortable with—and enjoying—making an African-American girl's hair look good is significant,” reports NPR. “The story of African-American hair is a story about belonging and not belonging.”

This could have been written about a major storyline in this season of “Orange Is The New Black,” which explored the underpinnings of character Suzanne’s pathology, starting from her tumultuous upbringing as a black girl in a white family. Suzanne has always been a volatile side character in the show, but this season, she took center stage as the target of manipulation. And the tool through which she is controlled is her hair. The crime boss Vee, when she comes to Litchfield, senses Suzanne’s insecurity about her unruly, non-white hair and uses it to her advantage—showing her such tenderness and expertise that Suzanne becomes her unstable attack dog.

2014 has been a banner year for conversation around racial fissures in America. Real-world deaths have led to an important conversation about what it means to be black in this country. In that perspective, it seems irrelevant to draw into the discussion of how hair is portrayed in pop culture. But the superficiality of appearance is directly connected to our deepest notions of identity. Olivia Pope from “Scandal” has walked in and out of the White House for every episode of the show without ever revealing to its interior what her hair really looks like. Suzanne’s parents in “Orange Is The New Black” adopted a black girl without considering that it might be important to learn how to do her hair properly. Coco, in “Dear White People,” convinced herself that she looked better in a blonde wig than in her own hair. There is a language of discrimination in just these acts. If there is such a thing as follicular injustice, 2014 makes it harder to be blind to it.