The year in magazine covers: These were the most talked-about images of 2014

From "Planet Hillary" to Kim in Paper, the magazine covers featuring women that sparked controversy this year 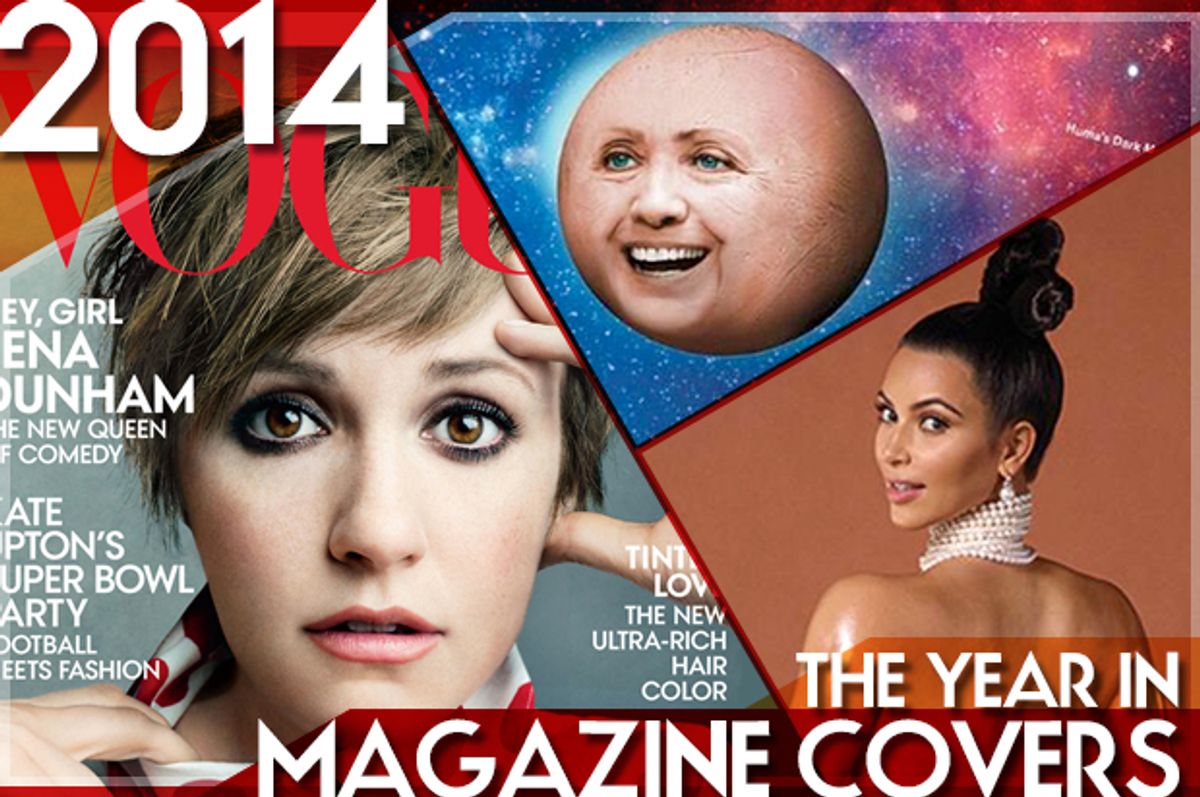 Magazine covers have always been conversation starters, from Muhammad Ali impaled by arrows on Esquire to pregnant Demi Moore naked on Vanity Fair. Yet as fewer and fewer people read print magazines cover-to-cover, the image itself  has become less a part of a coherent whole than a piece of snackable content, a ready-made meme to be broken off and dissected, even if the corresponding article never gets read.

From the debate about Photoshop ethics to the milestone moment of having a transgender woman on the cover of Time, magazine covers started a lot of conversations this year, particularly magazine covers featuring women (which continues to be most of them). Some of the conversations were productive, some were silly, and a lot of them were about Kim Kardashian. A look back:

The New York Times Magazine cover for its “Planet Hillary” story, featuring the former secretary of state’s head Photoshopped onto a fleshy-looking planet, generated more buzz than the story itself. Some loved it (like VF’s Juli Weiner, who called it a “legitimate Dadaist masterpiece”), some were repulsed by it, and of course, plenty of people memed it ("memed" is a word, right?). Yet no matter how you felt about it, the cover certainly did what it set out to in starting a conversation (plus, at least we didn’t have to have the usual quibbling about whether the cover had been Photoshopped).

The front of Vogue is sacred turf, so putting the #worldsmosttalkedabout couple (Vogue’s words) Kanye West and Kim Kardashian-West on the cover was a controversial move. Vogue high priestess Anna Wintour justified the decision in an editor's note, writing, "Kanye is an amazing performer and cultural provocateur, while Kim, through her strength of character, has created a place for herself in the glare of the world's spotlight, and it takes real guts to do that." (Later she was quoted offering a somewhat backhanded compliment, saying, "'I think if we just remain deeply tasteful and just put deeply tasteful people on the cover, it would be a rather boring magazine!") Yet some readers saw it as a cheap publicity stunt and felt that putting a reality star like Kim on the cover besmirched the elite, prestigious Vogue identity. “Well……I guess I’m canceling my Vogue subscription. Who is with me???” tweeted Sarah Michelle Gellar, while Vogue’s Facebook page and website were flooded with angry messages.

After Beyoncé was featured on the cover of Time’s most influential people issue, people on Twitter got mad that the magazine chose to photograph her in her underwear, arguing they wouldn’t have done the same thing for a man (although, to be fair, Beyoncé does like being in her underwear more than most …) As Huffington Post's Brogan Driscoll wrote, "high-high boots, corsets, the teeniest of short shorts may be Beyoncé's look du jour, but do they really have a place on Time magazine's cover?"

Both Lena Dunham and Vogue had a controversial year, no less so when they joined forces: After Lena was featured on the cover of the magazine and for a spread inside, Jezebel offered $10,000 for unretouched photos from the shoot, which they got their hands on and shared two hours later. Lena, for one, was not pleased. As she said in an interview with Grantland’s Bill Simmons: “They made such a monumental error in their approach to feminism … It felt gross,” adding that "It was the most minimal retouching. I felt completely respected by Vogue.”

In a similar controversy, a February Elle magazine cover featuring Mindy Kaling sparked a debate about body image after detractors pointed out that the three alternate covers (featuring Zooey Deschanel, Amy Poehler and Allison Williams) showed the women's full bodies and were in color, while Mindy’s showed just her face and was in black-and-white. Elle has levied criticisms in the past about obscuring larger women's bodies, like with Melissa McCarthy's Elle cover from the previous year, in which she was pictured in an oversize coat, and Gabourey Sidibe's, in which she was featured in tight close-up. (Elle was also accused of lightening her skin, which it vehemently denied.)

On "Letterman," Kaling expressed displeasure with the backlash, saying, "I didn't expect this reaction. There was a weird reaction, which was, 'Does Elle magazine think Mindy's not skinny enough to show her whole body, standing up from head to toe?...The implication was, 'What, Elle, you can't put her big, fat body on the magazine?' Why? 'Cause she's just fat and gruesome? Why can't we look at her beautiful fat body?'"

Kim was featured in a lot of magazine cover conversations this year, but perhaps none attracted more attention than her Paper magazine cover. While it didn’t quite “break the Internet,” it sure was reposted a lot, although, as VF puts it, "the general Internet sentiment seemed to be one of bemused appreciation." (Save for "Glee" star Naya Rivera, who commented on the photo on Instagram, writing, "I normally don't. But...you're someone's mother...")

Oprah and the lion on O

I mean … it’s Oprah. She can do what she wants.