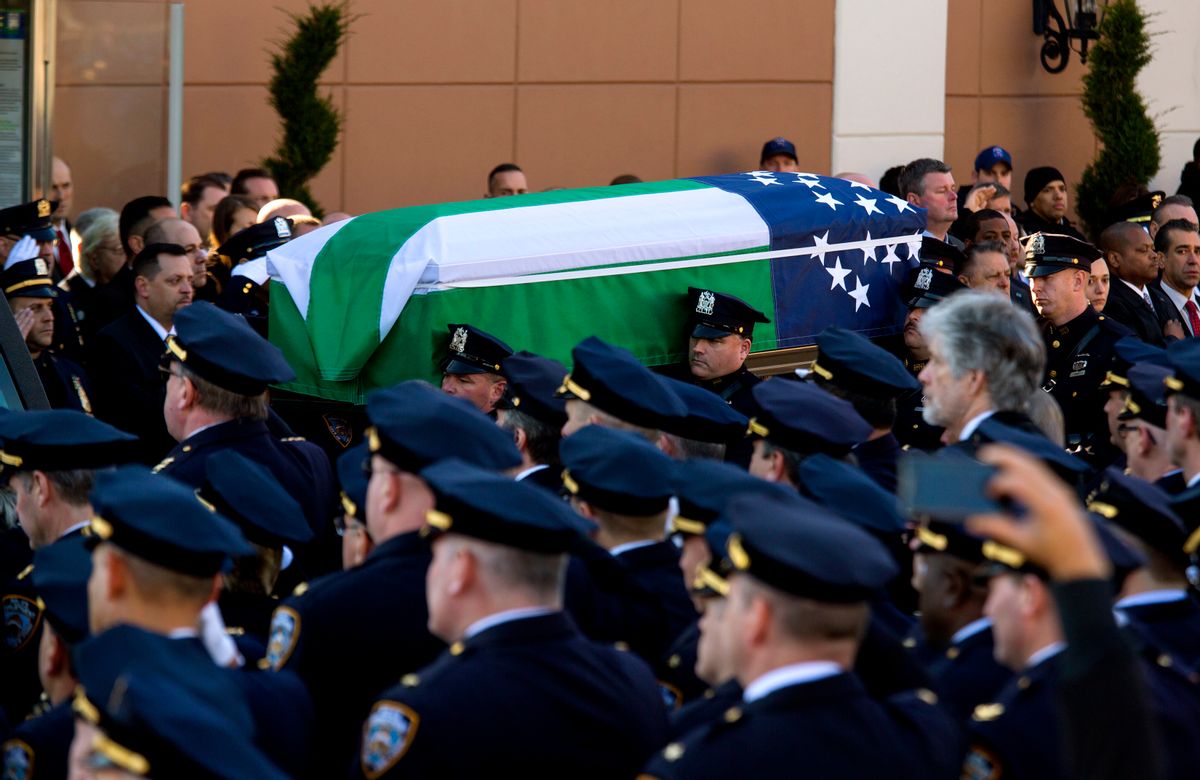 ADDS FLAG IS THAT OF THE NYPD - The body of New York City police officer Rafael Ramos is brought from Christ Tabernacle Church draped in an NYPD flag after his funeral in the Glendale section of Queens, where he was a church member, Saturday, Dec. 27, 2014, in New York. Ramos and his partner, officer Wenjian Liu, were killed Dec. 20 as they sat in their patrol car on a Brooklyn street. The shooter, Ismaaiyl Brinsley, later killed himself.  (AP Photo/Craig Ruttle) (AP)
--

The killings of two unarmed blacks by white police officers in Missouri and New York this summer touched off protests and a national debate over police conduct that intensified after grand juries declined to indict the officers.

Tensions escalated further after two New York City police officers were killed last weekend by a man who suggested in online posts that their deaths were in retaliation for the deaths of Michael Brown in Ferguson, Missouri, and Eric Garner in New York City. The gunman committed suicide.

Some key developments in the aftermath of the tragedies:

New York City Police Commissioner William Bratton said Sunday it was wrong for hundreds of police officers to turn their backs to a video monitor outside a Queens church as Mayor Bill de Blasio spoke a day earlier at the funeral of slain Officer Rafael Ramos.

"I certainly don't support that action," Bratton told CBS' "Face the Nation." ''That funeral was held to honor Officer Ramos. And to bring politics, to bring issues into that event, I think, was very inappropriate."

He acknowledged, though, that the morale of officers is low and said their actions "unfortunately" reflected the feelings of some toward the mayor. Some police officers blame de Blasio for creating an atmosphere of negativity toward the New York Police Department after a grand jury declined to charge an officer in Garner's chokehold death.

Bratton said de Blasio was "totally supportive" of officers and had contributed hundreds of millions of dollars outside the department's budget this year, much of it focused on officer safety enhancements.

Former New York City Mayor Rudolph Giuliani agreed with Bratton, saying it was wrong for officers to turn their backs on de Blasio or to try to blame him for the officers' deaths.

But he also said on CBS' "Face the Nation" that de Blasio should apologize to the police department because he "created an impression with the police that he was on the side of the protesters."

The National Latino Officers Association issued a statement late Sunday urging police officers to maintain discipline in honor of the sacrifice of Ramos and his partner, Officer Wenjian Liu.

"The Office of the Mayor deserves to be respected regardless of the disagreements you may have with the elected holder of the office," the statement said. "It is the office itself that merits your esteem and when you disrespect the Office of the Mayor, you tarnish the image the public has for the position you hold as the protectors of our great city."

A charity created after the Sept. 11 terrorist attacks says it has so far raised $250,000, or about a third of what it needs, to pay off the home mortgages for the families of the two slain New York City police officers.

The Stephen Siller Tunnel to Towers Foundation announced Sunday that contributions poured in from as far away as Hawaii, Italy and the United Kingdom.

The foundation described its plan to raise money for the mortgages at a news conference Friday. It said it hopes to raise the $800,000 needed to buy the homes for the families of Ramos and Liu by New Year's Day.

The foundation was created in memory of a firefighter who died on 9/11.

The Ferguson Police Department suspended a spokesman after he referred to a Brown memorial as "a pile of trash."

A statement the city provided to The Associated Press on Sunday didn't identify the officer who made the remark to a newspaper. The Washington Post attributed the comment to Officer Tim Zoll.

The memorial at the site of Brown's death was damaged last week after a car apparently hit it.

Zoll doesn't have a listed number and couldn't be reached by the AP.

The city says the spokesman denied making the comment to his supervisors but later admitted that he'd misled his bosses.

City officials said negative remarks about the memorial "do not reflect the feelings of the Ferguson Police Department."