The year in celebrity shade-throwing: From Martha vs. Gwyneth to Snoop Dogg and Iggy

Aided and abetted by Twitter and Instagram, it's been a big year for celebrity disses, beefs and brawls 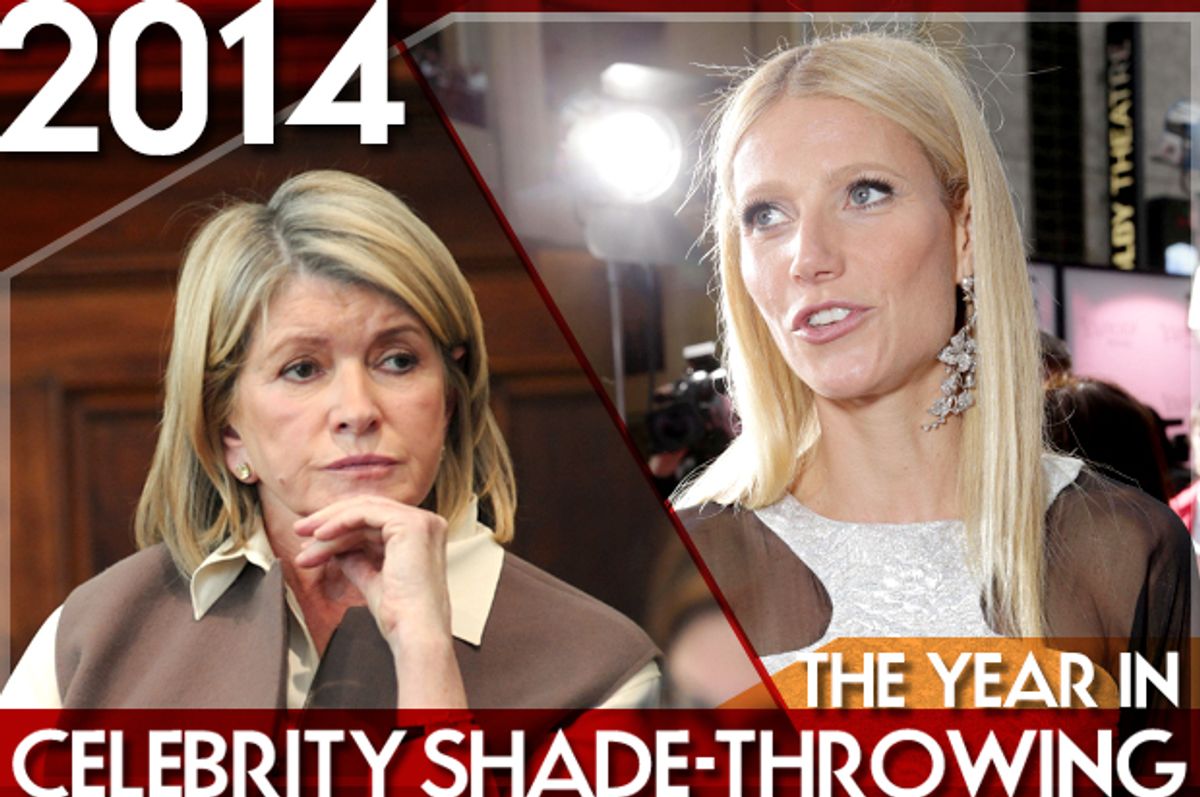 This has been a particularly big year for celebrity shade-throwing. Aided and abetted by Twitter and Instagram, celebrities have been slinging verbal potshots at one another left-right-and center, from Snoop Dogg comparing Iggy Azalea to Marlon Wayans in "White Chicks" to Bette Midler telling Ariana Grande not to "make a whore" out of herself. But beefs have been brewing off the web as well, from Justin Bieber and Orlando Bloom brawling in Ibiza to Martha Stewart and Gwyneth Paltrow waging a stealth war via baked goods. Here’s a look back at the disses and feuds that defined 2014:

Katy Perry and Taylor Swift's falling out
As you may have heard, Taylor Swift has many, many best friends, but Katy Perry can no longer call herself one of them. The former pals fell out of favor this year, after Swift revealed in a Rolling Stone interview that her 1989 track “Bad Blood” was inspired by a former friend and fellow musician who had tried to sabotage one of her arena tours by poaching her staff, widely understood to be Perry. Perry’s sassy Twitter response?: "Watch out for the Regina George in sheep's clothing…"

Lorde and Diplo chime in
The Perry/Swift feud expanded outward when Katy Perry’s boyfriend Diplo tweeted that someone should launch a kickstarter to get Taylor Swift a booty. Lorde then stepped in for new BFF Taylor Swift, tweeting: "Should we do something about your tiny penis while we're at it hm.” Diplo lashed back calling Lorde a “high school student,” which… she is? Lorde wins.

The battle of Martha and Gwyneth
Ever since Martha dissed Gwyneth’s GOOP lifestyle business last year, Martha and Gwyneth have been waging this year’s best culinary cold war by placing subtle jabs at each other in their recipes, from Martha's “Conscious Coupling” pastry to Gwyneth’s “jailbird cake.”

Nicki Minaj’s epic BET awards shade
When Nicki sassed Iggy Azalea during her BET award speech she qualified her remarks, famously, by smirking “No shade. No, no shade.” But this is Nicki, so of course her 2014 was positively overflowing with shade, from taking potshots at Miley Cyrus on Instagram to her ongoing feud with Lil Kim.

Snoop Dogg wages an Instagram war on Iggy Azalea
This year, Snoop waged a monthlong Instagram war against Iggy Azalea, kicking things off with a photo of an albino black woman captioned “Iggy Azalea No Make Up." Iggy responded with a photo of Snoop Dogg captioned "When your drug addict aunt gets clean.” It escalated from there, with a series of angry tweets from Iggy, and Snoop comparing Azalea to Marlon Wayans in “White Chicks.” While it seems like a trivial back-and-forth, there are more complex forces at work here, with The Atlantic astutely observing that the beef "restages a long-standing dynamic in which black men and white women confront each other with accusations of racism and sexism—with black women as the displaced, ignored center of the discussion.” Alas: They eventually kissed and made up.

The Orlando Bloom and Justin Bieber have a dust-up in Ibiza
Word has it that an off-color remark about Bloom’s ex-wife Miranda Kerr is what led to Bloom knocking the pint-sized Canadian in the face at a Ibiza nightclub. Either way, knowing Biebs' track record, we're sure he had it coming.

Bette Midler disses Ariana Grande
OG diva Bette Midler (somewhat hypocritically) called out Ariana Grande in November, saying "It's always surprising to see someone like Ariana Grande with that silly high voice, a very wholesome voice, slithering around on a couch" and "You don't have to make a whore out of yourself to get ahead.” In response, Ariana tweeted "Bette was always a feminist who stood for women being able to do whatever the F they wanted without judgement! Not sure where that Bette went but I want that sexy mermaid back!!! always a fan no matter what my love." Bette later apologized.

Aaron Paul vs. Barbie
When Toys ‘R’ Us pulled a line of “Breaking Bad” action figures from their shelves, Aaron Paul took to Twitter to protest, writing "Wait, so @ToysRUs pulled all of the Breaking Bad figures from their shelves and still sells Barbie? Hmmmm...I wonder what is more damaging?" adding "And what about all of the violent video games you sell @ToysRUs ? Do you still sell those? Florida mom really messed it up for everyone." Paul also posted a petition to reinstate the toys. His costar Bryan Cranston also chimed in, slightly less angrily, saying "Florida mom petitions against Toys 'R Us over Breaking Bad action figures." I'm so mad, I'm burning my Florida Mom action figure in protest."

Freddie Prinze Jr. calls out Kiefer Sutherland
Earlier this year, Prinze Jr. unexpectedly spoke out about his time on “24,” saying he “hated every moment of it” and calling Kiefer Sutherland “the most unprofessional dude in the world.” Kiefer Sutherland, ever the gentlemen, responded by saying it was the first he had heard of Freddie's grievances and wished him the best.

Azealia Banks vs. everyone
This year, the notoriously incendiary Twitter beef queen continuing her quest to insult, well, everyone in the universe. Some of her targets this year included T.I. (for the millionth time), Iggy Azalea, naturally (After Ferguson, she spit "its funny to see people Like Igloo Australia silent when these things happen... Black Culture is cool, but black issues sure aren't huh?"), and vegans.

Everyone vs. Iggy Azalea
From Snoop to Azealia Banks to Eminem to Nicki, the controversial rapper seems to be the main target of the celebrity shade industry this year. Perhaps the worst instance was when Eminem rapped "Put that s**t away Iggy. You don’t wanna blow that rape whistle on me." Iggy's pitch perfect response: