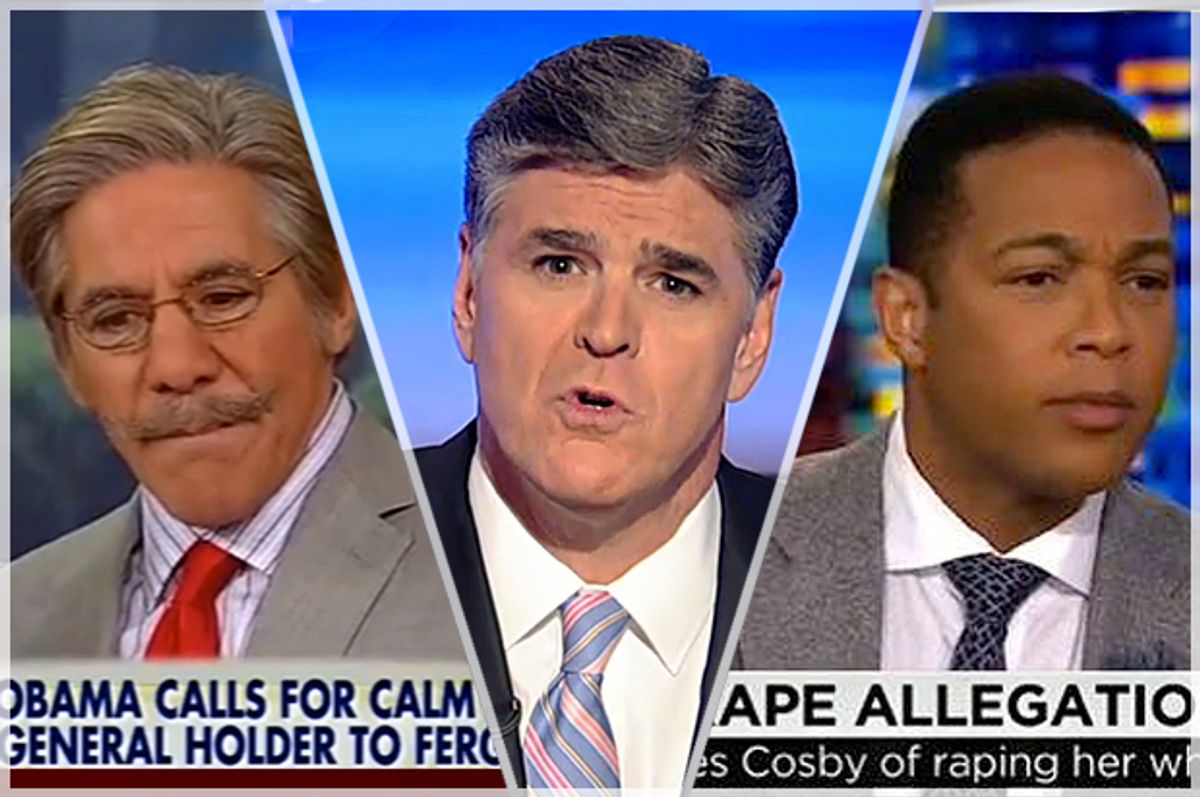 Were people always this horrible, or is it just that we're all newly allowing our bigotry to surface?

If 2013 was the year of leaning in, then 2014 has been the year of leaning the fuck out. And if, theoretically, a person were to only watch cable news this past year, he would probably think that America had regressed into something much uglier than previously imagined.

Behold: Here are the most offensive, cloistered, ignorant things said on cable this year.

In October, a woman filmed herself walking around New York City for a day, during which time she was catcalled over 100 times. The video went predictably viral and the media had a blast adding insult after insult to injury. In the clip below, "The Five's" Bob Beckel contributed to the harassment conversation with the following lurid observation: "Damn, baby. You're a piece of woman":

In another classic moment on "The Five," Eric Bolling referred to the female pilot who led airstrikes on Syria by using the following hideous pun:

Elsewhere on Fox News, and apropos of nothing, "psychiatrist" Keith Ablow said that Michelle Obama "needs to drop a few":

During the midterm elections, meanwhile, Fox's Kimberley Guilfoyle told young women not to vote, and instead to focus on their Tinder profiles:

Meanwhile, over at ESPN, Stephen A. Smith instructed women not to provoke their men. (Because domestic abuse is apparently the victim's fault, now?) While Smith later apologized for the comments, calling it the most "egregious" mistake of his career, ESPN suspended him shortly thereafter. (But only for a week.)

Last month, CNN's Don Lemon interviewed Joan Tarshis, one of Bill Cosby's rape victims, and was thoroughly confused about the mechanics of forced oral sex. There are ways to avoid it, he unhelpfully insisted.

In September, Forbes columnist and fraternity corporation president Bill Frezza was fired after penning an almost-universally-maligned article entitled, "Drunk Female Guests Are the Gravest Threat to Fraternities." If you notice, we said "almost universally." Because what is Fox News good for if not defending horrific arguments?

Here a Fox contributor argues that slain teenager Michael Brown was not "unarmed," because he was so big:

And here, Fox News' resident psychiatrist Dr. Keith Ablow blames Michael Brown's death on his father (as opposed to, you know, the guy who shot him):

Ferguson brought the issue of race relations screeching into the media spotlight, revealing that some of our beloved cable anchors are less familiar with race politics than others. And, what would you know, Bill O'Reilly won the award for most clueless!

Which actually sums up the worst of cable news this year quite nicely: Rich white dudes celebrating themselves at the expense of everybody else.

Be better next year, guys. Please.