The 2014 hall of shame: Looking back at the year's worst candidates

Once seen as either sure things or formidable contenders, these candidates flopped -- big time 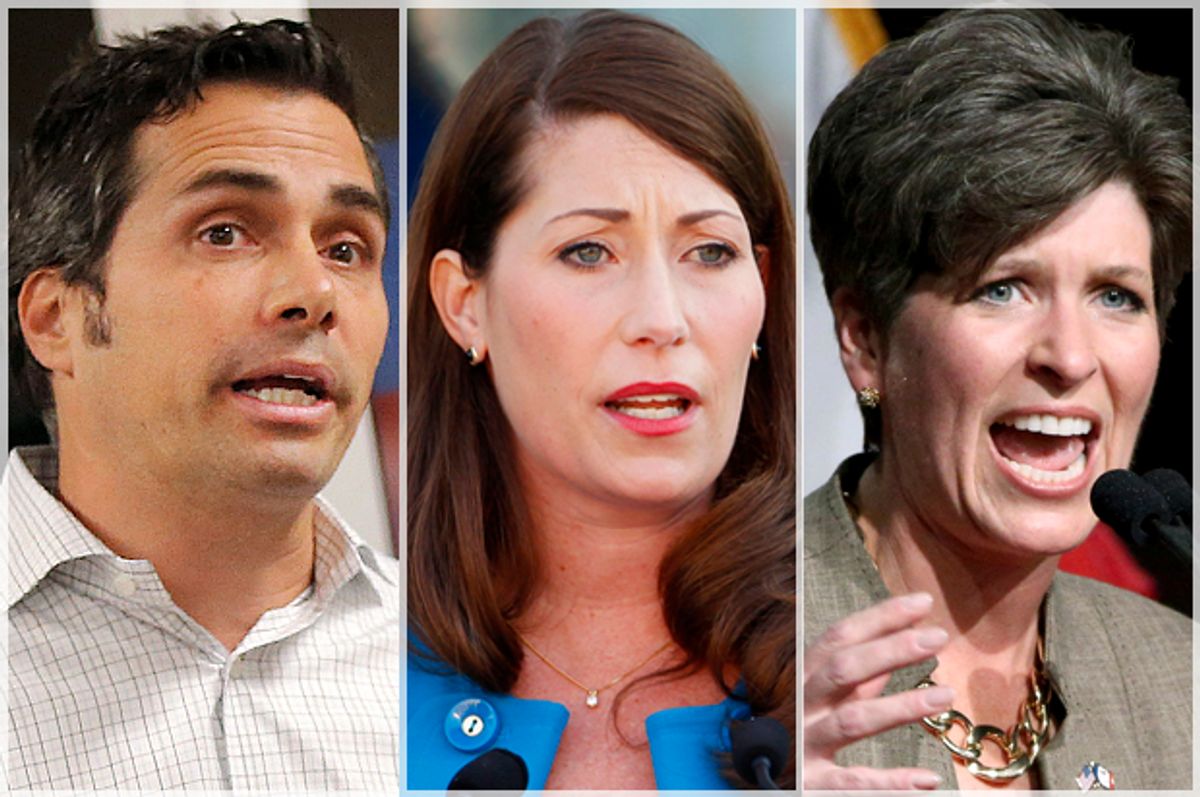 With the midterm elections nearly two months behind us, the political press has long since pivoted to 2016. But this being the end of the year and all, now is as apt a time as any to look back and take stock of the 2014 campaign before finally consigning it to the ash heap of political history.

Today, we turn our attention to the five worst candidates of the cycle. Of course, every election year features a select slate of disastrous candidates (Do the names Sharron Angle, Christine O'Donnell, Todd Akin or Richard Mourdock ring any bells?) It's not that this year witnessed the nomination of uniquely bad candidates -- indeed, compared to past candidates notorious for dabbling in topics like witchcraft and rape, this year's crop of contenders was positively splendid.

Still, some candidates managed to go from odds-on favorites to Election Day losers, while others badly fumbled closely contested races and ended up losing by far larger margins than expected. Here, without further adieu, we rank the 2014 hall of political shame.

Democrats still shudder when they think back to the early winter of 2010, when, after a lackadaisical campaign, Massachusetts Attorney General Martha Coakley blew a 30-point lead in the special election to succeed the late Sen. Ted Kennedy, losing to Republican Scott Brown by 5 points. But Coakley dusted herself off and won another term as attorney general that fall, with an eye toward ultimately redeeming herself and winning higher office.

Democratic Gov. Deval Patrick's decision not to seek a third term gave Coakley that opening. While many Democrats remained scarred by the 2010 experience, Coakley assured the party that she'd learned from her humiliating defeat, and early polling gave her a double-digit lead over GOP gubernatorial candidate Charlie Baker. A repeat of 2010 couldn't have been in the cards -- right?

But it was. Lingering doubts prevented Coakley from consolidating support in her own party, and 58 percent of Democratic voters supported candidates other than Coakley in the September primary. Such a late and divisive primary left Coakley little time to unite Democrats, and despite a massive fundraising gap between Coakley and the well-funded Baker, fellow Massachusetts Democrats were reluctant to pony up and contribute to Coakley's campaign. By mid-September, polls showed the race effectively tied, and Coakley never recovered, losing to Baker by 2 points on Election Day.

To be sure, moderate Republicans like Baker have won five of the last seven Massachusetts gubernatorial races, so his victory was hardly precedent-breaking. But there was never a clear rationale for Coakley's campaign -- other than that she wanted a job promotion -- and the fact that she has now lost two major elections after once leading in both by 30 points doesn't exactly speak highly of her political acumen.

When Democrat Chad Taylor dropped out of the three-way Kansas Senate race in early September, GOP Sen. Pat Roberts looked like he was in real trouble. Polls showed him losing badly in a head-to-head contest with independent Greg Orman, a self-funding millionaire businessman. But Roberts rallied the GOP troops, portraying Orman as a liberal Trojan Horse for national Democrats and bringing conservatives like Ted Cruz and Sarah Palin to stump for him.

It worked. Roberts' base mobilization played a key role in his victory, but don't discount the avoidable errors Orman committed during the campaign. Fearful of looking like a (gulp) Democrat, he emphasized that even though he supported President Obama in 2008, he voted for Mitt Romney in 2012, and adamantly refused to say whether he'd caucus with the Republicans or Democrats in the Senate. Orman ran a campaign heavy on No Labels-type platitudes -- he wanted to "go to Washington, solve problems, and focus on challenges that affected Kansans" -- while taking care to avoid policy specifics. For awhile, it looked like that sufficed; the final polling average in the race gave him a tiny edge over the incumbent.

But the polls were way off, and Roberts trounced Orman by 11 points. It turns out that you can't beat something with nothing, after all. And while it may have been a strong Republican year in a strongly Republican state, Orman's strategy of distancing himself from Democrats did him no favors. Even as Orman went down to a double-digit defeat, Paul Davis, running as a Democrat, came within 4 points of unseating Gov. Sam Brownback.

What does it take to lose to one of the country's most unpopular senators? It helps, of course, if that senator is a Republican in a midterm climate that favors Republicans. But as Kentucky Democrat Alison Lundergan Grimes' loss to Mitch McConnell attests, a permanent defensive crouch doesn't hurt, either.

Not unlike Orman, Grimes took pains to distance herself from Obama and the Democratic Party, avowing that she was a "Clinton Democrat" and repeatedly refusing to say whether she voted for the president. She also excoriated Obama in terms that sounded like they came directly from a Republican National Committee press release, denouncing his administration's so-called war on coal, for instance. It made McConnell's effort to secure a sixth term considerably easier. All McConnell had to do was ask the following: If even my Democratic opponent agrees that Obama is waging war on this state, why would you vote to empower his party in the U.S. Senate?

By Election Day, it was clear that Grimes, once touted as a top Democratic recruit, would lose -- probably by a margin in the mid-to-high single digits. She fared even worse than the polls predicted, however; McConnell crushed her by 16 points.

Having gained nine Senate seats this year -- better than the six to eight most forecasters predicted -- it would seem that Republicans could hardly have performed better in the fight to control the chamber. But the Michigan Senate race is a rare example of a contest in which the party surrendered an early lead, and while Michigan is indeed a mostly blue state, the GOP's poor performance in the race had virtually everything to do with Republican nominee Terri Lynn Land's calamitous campaign.

Land, a former Michigan secretary of state, wasn't the GOP's first choice in the race to succeed retiring Democratic Sen. Carl Levin, but she looked like a credible enough contender. Early polls showed Land either tied with or leading Rep. Gary Peters, the Democratic candidate. In March, Nate Silver's FiveThirtyEight pegged Land's chances of victory at 45 percent, suggesting that the race was effectively a coin flip.

But Land gradually wrote herself out of contention -- running bizarre campaign ads, dodging questions on policy issues, and failing to assert control of her campaign. By the late summer, she was a clear underdog, and Republicans were already trashing Land as politically inept and woefully unprepared for the rigors of a Senate campaign.

For progressives, the retirement of populist liberal Sen. Tom Harkin was already a big loss. What makes Harkin's impending departure even more cruel is that he'll be succeeded by Joni Ernst, a right-wing conspiracy theorist who once supported arresting federal officials for implementing Obamacare, declared that she keeps a gun in case the government should "decide that my rights are no longer important," and flirted with President Obama's impeachment.

Ernst didn't trumpet such views during the campaign; she ran a primarily personality-based race in which she promoted her hog-castrating, motorcycle-riding, farm girl persona. On Election Day, she defeated the charisma-challenged Rep. Bruce Braley, the Democratic nominee, by 8 points.

Though his support never hit 50 percent, Braley had begun the campaign with a clear edge, but he proved a rusty campaigner -- and paid the price. Most Iowans got to know him as the guy who hated Iowa farmers. In reality, Braley simply got caught on tape noting that it's a bit silly for Iowa Sen. Chuck Grassley, who has an agricultural background but lacks a law degree, to be the Republican poised to chair the Senate Judiciary Committee. Even if the GOP-generated outrage over Braley's comment was dumb and his point was a fair one, a four-term congressman should be well aware that politics is often a dumb business and that thanks to a press corps obsessed with gaffes and gotcha moments, it doesn't matter how valid a point is if you make it inartfully.

Once it emerged that Braley had gotten into a fierce dispute with a neighbor over trespassing chickens, it cemented the image of him as something of a prick. Ernst pounced on Chickengate, making the asinine claim that if Braley couldn't even get along with his own neighbors, he'd surely be an ineffective senator. It was, again, a dumb debate over a non-issue, but it's hard to blame Ernst, tactically speaking, for making the race a referendum on Braley's personality rather than her insane worldview.

To be fair, the election of Sen. Ernst (R-World Net Daily) wasn't just a matter of Braley being a problematic candidate. Committed to the narrative that Republicans had undergone a post-Tea Party makeover, a lazy mainstream media largely glided over Ernst's disturbing extremism, all but handing her the keys to a six-year Senate term. But it's hard to believe that Harkin or any other politically deft Democrat would have lost to Ernst -- let alone by such an unexpectedly wide margin. It would also have helped, perhaps, if Braley had actually faced a competitive primary, rather than running unopposed for the Democratic nod. His flaws on the stump may have been exposed, giving the party enough time to stave off a wholly unnecessary, perfectly avoidable defeat.

So hats off to you, Bruce Braley. You won't be a senator, but you've earned the (dubious) distinction of being 2014's worst candidate.