The best, worst and weirdest ads of 2014

From Axe's "Make Love, Not War" to Woodford Reserve's bourbon spot, the 2014 advertisements we couldn't forget 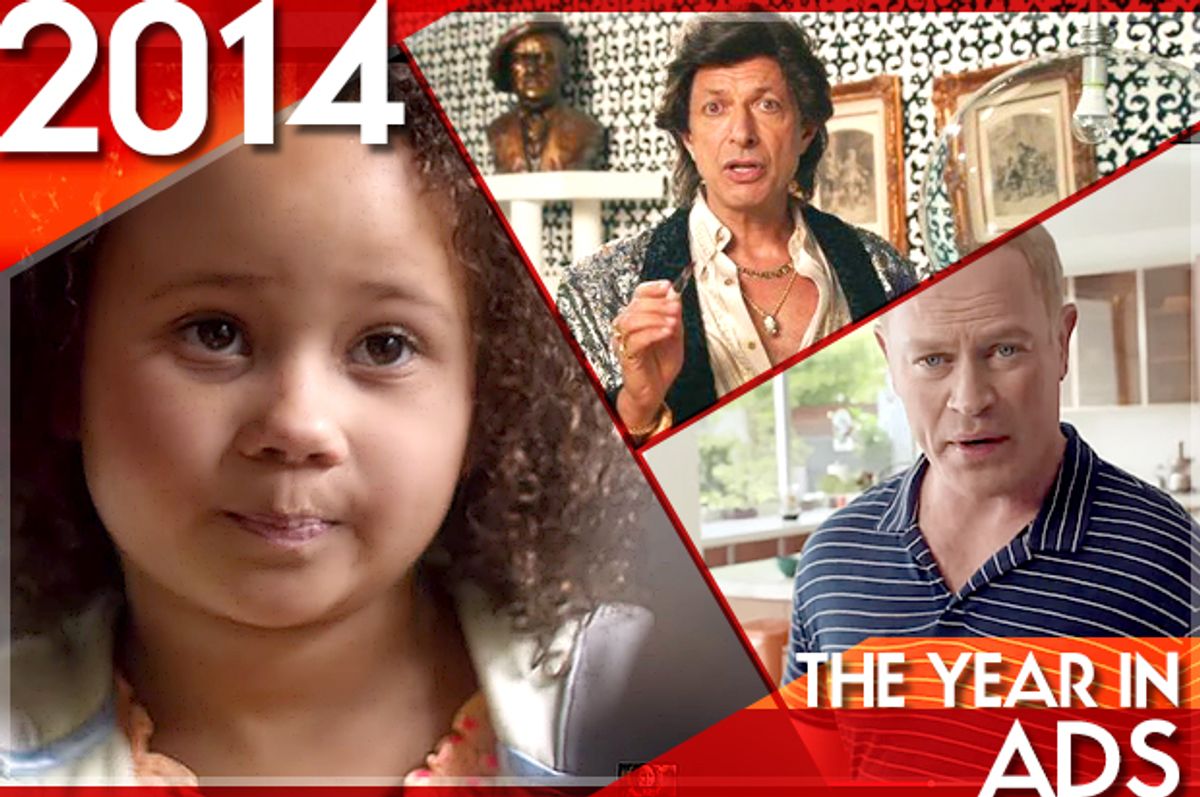 We’re deluged by advertisements more than ever in the television world—in a frantic effort to capitalize on increasingly diffuse audiences, ads seem to precede every kind of content, assuring you that “You can skip this advertisement in five seconds” or “Click through for your content.” Most of the time I spend my effort writing about the programming in between commercial breaks—fast-forwarding, muting, skipping or texting during ads, because there’s barely enough time in the day as it is. But there’s always some ad or another that sneaks through and gets under your skin, either by being particularly great or really annoying, whether that’s something that aired just once at the Super Bowl or something that repeated during every single goddamn Hulu commercial break. I asked my fellow Salon staffers and Twitter for their suggestions; below, here are the ads that made us pause.

BEST
Spotify, “Can’t Find the Words”
This little spot is my favorite of the year. It’s subtle, but delightful: Aammunicate with their crush via Facebook. The frustrated almost-communications, the drama of seeing that the other person is typing, without knowing what they’re going to say—it’s storytelling about love in the digital world that is almost painfully true to life. (Or, at least, true to college.)

Axe, “Make Love, Not War”
Back when this aired during the Super Bowl, our own Nico Lang didn’t love it, but it was one of my favorites of the event. Axe is not my preferred scent, but I like the idea of replacing bombs with kisses.

General Electric, “Enhance Your Lighting”
What’s this commercial selling? Oh, who cares! It’s Jeff Goldblum, directed by “Check It Out! With Steve Brule’s" Tim Heidecker and Eric Wareheim—it’s basically guaranteed to be brilliant.

Cheerios, “Gracie”
The weirdly controversial biracial family returned for a second installment for the Super Bowl, upping the ante of cuteness just enough to be adorable without making it treacly.

Esurance, various
The insurance company (a division of Allstate) went after Geico hard with its ad campaign—and though I can’t endorse the theme music, or the fact that due to certain streaming services I have seen these all way too many times, the premises of the spots are pretty damn hilarious. Our books critic Laura Miller is a sucker for Shirlee playing “candy crush”; I always laugh when Larry tells the camera you can save time rewinding DVDs. And look, Beatrice’s “facebook wall” is pretty funny, too.

Geico, “Horror Movie: It’s What You Do”
Not to be outdone in the car insurance wars, Geico’s commercial satirizing horror films is 15 seconds of tongue-in-cheek fun. Why don’t we hide in the shack full of chainsaws, indeed.

AT&T, “Cutest Grape”
Every time I think I’m dead inside, this commercial turns me into mush.

Fitbit, “Find Your Fit”
Copy editor Ruth Henrich can’t resist this one; and look, if a computer is going to track and then judge your every movement, let us at least pretend that it will be fun.

Newcastle Brown Ale, “Behind the Scenes of the Mega Huge Football Game Ad Newcastle Brown Ale Almost Made”
Anna Kendrick is profane, adorable and hilarious in a commercial about how she was supposed to make a ton of money doing a real Super Bowl commercial.

WORST
The GOP, “All of the Above: Scott G.”
Hipsters: Do you feel like being pandered to by a guy who looks and sounds like you, but is meanwhile complaining about how we don’t frack and/or drill for oil enough? Then does the Republican Party have the commercial for you!

The runner-up for worst ad of the year is, naturally, the other GOP ad featuring Scott—“Paycheck.”

DirecTV, “Marionettes: Pretty”
This one should have died at the drawing board. Instead, DirecTV has expanded the line to include more and more ads. The joke is apparently about how puppets will feel bad about going “wireless,” but in this spot, it looks like the joke is, I dunno, patriarchy?

Woodford Reserve, “Bookshelf”
“When I see a man drinking bourbon, I expect him to be the kind who could build me a bookshelf. But not in the way that one builds a ready-made bookshelf. He will already know where the lumberyard is,” intones the female narrator of this bourbon ad. Is it nostalgia for traditional gender roles—or life pre-Ikea—or just bad writing? Either way, this spot’s gender roles are so perplexing that the New Yorker felt compelled to write about it: “The core message is one of stern-faced seriousness: Bourbon defines a man’s world, and women are welcome only if they play by the men’s rules. It’s enough to make you want to reach for a stiff drink.”

Discover, “Frog Protection”
Please make the almost-twins ads stop, Discover. Especially this one, which repeats “frog” and “fraud” interchangeably. No one wins—including the viewer.

Mercedes, “Dirty Driving”
Indeed: This is an advertisement featuring two cars—a sleek little sedan and an 18-wheeler truck—seducing each other and then procreating. Excellent use of “Time of My Life,” but the fact that the baby car is so ugly just reminds the viewer that they’ve just witnessed an unholy act.

Cricket Wireless, “More Classes”
This ad, featuring a hat-wearing guy making lame jokes, was so bad, apparently, that Cricket wiped it off the face of the earth. For a while there, this commercial and others in the same campaign were impossible to avoid on Hulu; not offensive, just irritating. Cricket’s got a whole new campaign now; goodbye, hat-wearing guy, sorry that you were so annoying you don’t exist anymore.

Sprint, “Framily” series
What’s more annoying: The word “framily,” the shrieking, the talking hamster, or the fact that Judy Greer is stuck in these terrible commercials?

Chanel, "The One That I Want"
Chanel's advertising campaign jettisons irony in a sultry campaign that switches the point-of-view of "Grease's" "You're the One That I Want—changing it from a sassy female declaration of intent to a weirdly commanding male ballad. You know how Aretha Franklin's "Respect" was actually written for a man to sing? Like, the literal opposite of that. As Genevieve Valentine points out: They changed the lyrics to "You better shape up/'cause you need a man."

...HUH?
Toyota, “Swagger Wagon ft. Busta Rhymes”
So, this happened: Busta Rhymes and a white-bread family of four created a song about how the 2015 Sienna is not a minivan but a “swagger wagon”; each member of the fictional Neubert family has a verse, and then Busta himself comes out in the “featuring” slot. It’s hard not to admire Toyota’s dedication to the form—“Swagger Wagon” is actually the second time Toyota’s gone down this road with the Sienna; the last time, four years ago, was a number called “Where My Kids At?” Both versions include the questionable coinage “mother-fathers” instead of “motherfuckers.” Both are performed by all-white families of four with a mom, a dad, a son and a daughter. To cop contributor Ian Blair’s observation: RIP, Busta.

Cadillac, “Poolside” and Chrysler, “America’s Import”
Both Cadillac and Chrysler chose live television events to deliver bizarre, vague spots about not cars but America, as presented by famous white guys. The former is actor Neal McDonough strolling around his gorgeous bungalow talking about how America’s crappy labor rights means we don’t get August off but we do get slightly nicer cars; the latter is Bob Dylan intoning the tautological phrase “What’s more American than America?” as shots of Detroit and American icons like Marilyn Monroe take up the foreground. Neither makes much sense; oddly, neither makes you feel good about being American, either. The former makes you feel like you can only be a happy American if you’re very rich and white and male and dressed in that particular suit; the latter convinces you that the best days of America are in the past. Neither convinces anyone to buy cars.

Samsung, “Kristen & Dax” series
Kristen Bell and Dax Shepard are a truly adorable real-life couple. Samsung nabbed both of them for this year’s ad campaign, where the two of them bounce around their house using various on-brand products while being cute with each other. It works, except that they almost never leave the house—meaning that the story has a kind of creepy dark side. At the end of this one, they spend hours getting ready for an event and then never make it out of their incredibly gorgeous bungalow. I think the excuse is that Kristen is pregnant in both spots, but like, do you really need to use your numerous Samsung devices to call your partner when they are in the same building? Anyway, props to Dax for venturing out to get provisions every now and again; props to Kristen for rocking pregnancy pajamas hard; and props to them both for having literally the coolest house ever, even if they seem to have no friends or family (or "framily").

Honda, “Happy Honda Days” 2014
This year, for the holidays, Honda’s trying to convince you to buy a car by shaking out some toys from the attic: Skeletor, He-Man, Jem, Strawberry Shortcake, G.I. Joe, and Stretch Armstrong. There’s a lot going on. Some of the online videos are about raising $50,000 for charity, but that’s not totally obvious in the spots, which are instead about selling Hondas, presumably. Anyway, talking toys, it’s a little cute, a little bizarre. Or as staff writer Erin Keane put it, “seven layers of weird.”