The end of my snooping

How I stopped digging into emails, cellphones, notebooks, journals, photos albums -- and learned to trust my gut 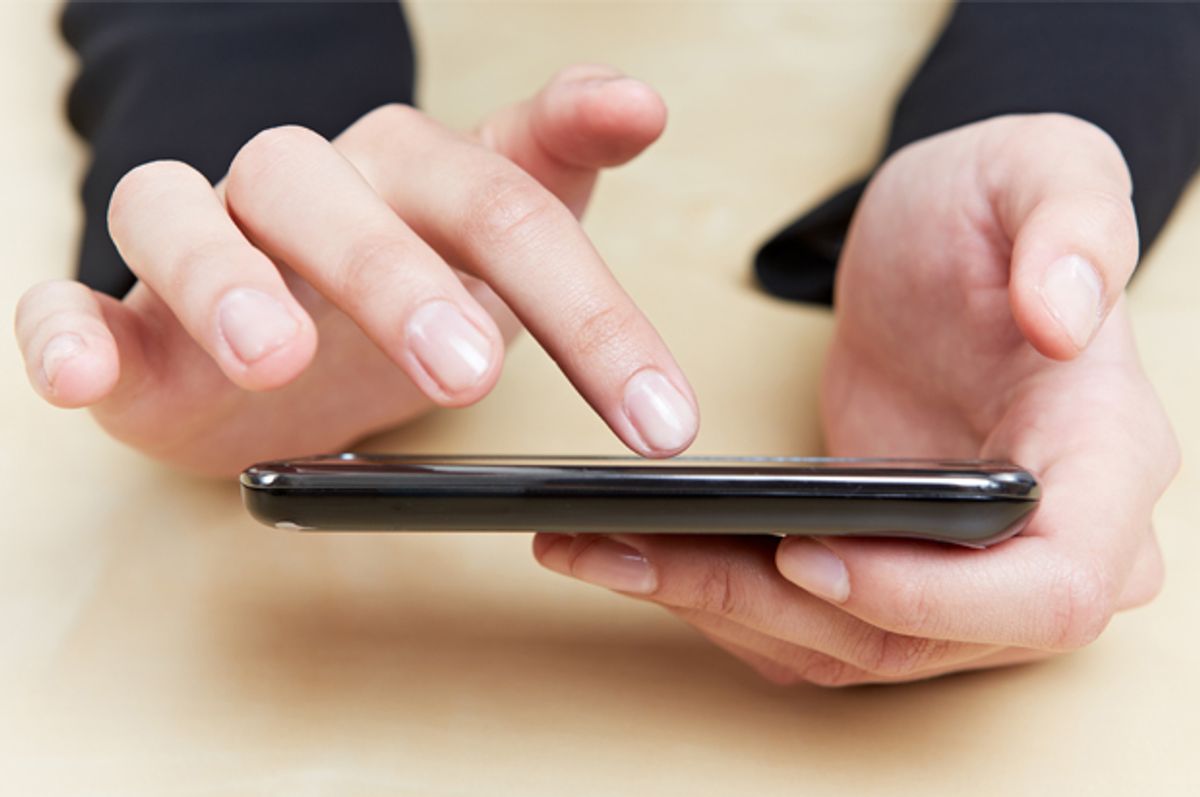 I looked over my shoulder, double-checking that the door was locked before I anxiously entered his password. My stomach clenched while I waited for emails to load onto the glaring screen. My husband Andrew’s password was the same as mine: our first initials and the date we married. We were that couple.

My fingers drummed lightly on the keyboard when the phone rang, momentarily interrupting my espionage. It was my mother calling as she did every morning. Though tempted to send her to voicemail, as I did every morning, I needed reassurance about my muddy matrimony.  I picked up the phone, diving right into details.

“He leaves for class early and comes home late. He’s constantly picking fights, finding new faults. Oh, and the other night he took his cellphone into the bathroom to shower, who does that?”

My mother sighed. “If you feel him changing, he is changing,” she said. “If he’s suddenly focusing on new problems in your relationship, trust me, he’s comparing you to another woman, one he thinks he wouldn’t have any problems with.” It wasn't the insight I’d hoped to hear.

My parents had been married for 34 years, faithful throughout. I assumed her harsh advice came from her decades as a couples counselor. She’d witnessed an array of bitter arguments and costly outcomes, providing her the reality check I needed.

“Come on,” I scoffed. “I think I’d notice if I was being cheated on,” I said as my battery began blinking toward death.

“Confront him then,” she suggested.

The line went silent. I reopened the computer. It couldn’t be an affair. I was certain. Well, almost certain. Andrew was nerdy. He was Episcopalian. He played disc-golf for Christ’s sake.

Still I scrolled through hundreds of emails in his inbox, searching for a name I knew and pausing at the names I’d never heard him say. I scoured for hours before moving onto his sent folder. I double tapped on a message from that morning at 6:14 a.m.

Tammy, I miss you. Can you meet me? I know we shouldn’t have crossed that line but I am falling in love with you. We need to talk.

My lips parted, and a gasp too exaggerated to be mine, came out of me. She was his classmate, a fellow doctor in training. I’d met her. She’d always been warm to me. I baked cookies for her Christmas party. I knew her well. Quiet. Asthmatic. Her wiry dark hair parted down the middle and dark brown eyes never intimidated me. Unlike Andrew, I found her fairly forgettable.

Dozens of conversations printed onto the floor, each page more agonizing to read than the one before. In messages starting with nicknames for each other and ending with love, he confided in her about our relationship. I read on as he exposed our every struggle and unhappiness that until that moment, I’d thought was passing. Their intimate banter made me nauseated. By the last page, I knew he wasn’t cheating on me; he was leaving me. Time crept, the sun tagged in the moon, but I sat paralyzed in pajamas. Until the front door slammed and his heavy boots bounded up the stairs. Confront him, my mother’s words echoed.

“Hi you,” he said, kissing my forehead. I inhaled, desperate to catch her scent.

“Andrew,” I began, hands under crossed arms, my fingers gripping onto ribs. “Are you involved with another woman?” The words sounded foreign, like something I’d seen on bad TV.

“You can’t be serious,” he paused, narrowing his eyes. “No, Jess, I’m not. Where is this coming from?” His hands remained folded in his lap.

“Andrew, just tell me,” I paused, “is there someone else?”

He laughed, shaking his head, “No, why? Are you seeing someone else?” He questioned mockingly. I wanted to strangle him, claw out his eyes, but I was stuck, frozen in disbelief.

I pitched the stack of pages at him. Screams, sobs, slammed doors. Then silence. That night our marriage was over. An affair I could forgive. A betrayal of his body, I could forget with time. But when he seemed so comfortable lying, I knew I’d question everything if I stayed.

Later, as we divided everything we owned and I packed up our past, I found a photo between the pages of a book. It was from his birthday that year, a group of us at dinner. He sat on one side of the table, smiling, wearing a red tie around his neck. I was on his left and she sat on his right.  He’d compared us, side by side, for months. I’d lost a competition I had no idea I was in.

Divorced and cynical, I moved to New York, eager to forget what I was leaving behind.

I buried my hurt as fast as I could. My Colombian complexion set against Irish blue eyes quickly caught the attention of men. To them I was exotic; to me they were identical. Their names varied, but their desire to withhold information remained the same. I was convinced that no matter what they said, if I looked hard enough, I’d find that they were all like the man I’d left, the one that left me. My doubts disgusted me, but no one had yet proved me wrong.

Until my first date with Philip, a writer I’d met on a subway platform. We shared sake and exchanged stories. He began with his own hour-long confessional. I sat shocked, but he went on.  He’d lost his virginity at 19 and regularly snuck into a double feature. He downloaded music illegally and had a six-year-old daughter. Instantly, his secrets were scattered on the table yet strangely it didn’t stop me from needing to uncover more.

Three months into our romance, my prying rituals were in full swing. While he was in the shower, I checked pockets for receipts, smelled clothes worn the night before. Early mornings, before he woke, I slid open his iPad, uncovering a dormant Twitter account, cute animal e-mails from his mother and a tagged photo on Facebook of him and a busty blonde a month before. 37 people liked this, I did not.

Voicemail meddling revealed bad blood between him and his parents. Debt collection notices were stuffed into envelopes and piled under his desk. An old unused passport in his underwear drawer exposed his disinterest of adventures abroad. Those details were all red flags that I had dismissed. I’d been too busy checking his Internet browser to realize how incompatible we might be.

I lay in bed awake one night, waiting for his snoring to begin. I wiggled out from under his heavy arm and softly tiptoed out of the room. The hunt began in his office, through folders, binders and photo albums. After I finished, I neatly tucked away proof of magazine subscriptions and a happy childhood filled with awful sweaters. I hurried to the guest bedroom next. Holding my breath, I lifted the mattress, or at least I tried to. I carefully unpacked shoeboxes, and shook books by their binds. I knew I should stop. And I would, once I found what I was looking for.  I always searched for the same thing, the other woman. Either the one he hadn’t let go of from his past or the one he was sneakily starting a future with. Disappointed by another room, I walked over to the couch defeated and anxious. Maybe I had let this go too far. Maybe there was actually nothing to be found. I leaned back, wondering if I should check the freezer again. I felt a pinch against my leg. In between the cushions was a leather journal I’d never seen before. Jackpot. I pulled it out and opened to the dog-eared page.

I haven’t said it yet but I love her. He scrawled in sloppy script.

She has blue eyes and a spatter of freckles on each cheek. There’s something broken about her, something too damaged for me to fix, though I want to. She accepts me. She trusts me. I love this one.

A rush of panic washed over me. I slammed the cover closed, finally disturbed by my findings. Those were my blue eyes, my freckled cheeks. The page was dated two days before. This man loved me, and I silently vetted him. I violated him and held him accountable for the betrayals of the men before him. He was decent; I was the dishonest one.

I snuck into his warm bed, leaned over and kissed him. I wanted to deserve this love even if I wasn’t able to reciprocate it.

The following morning I took a deep breath and began a confessional of my own. I admitted that I had snooped through his house the night before. He sat up, but I continued.

“I’ve also looked through your phone, your computer,” I admitted, letting out a high-pitched laugh, unfamiliar to me.

He sat quietly, his hand rubbing his jaw.

“Last night, I read your journal. The way you wrote about me was so --”

“OK, enough,” he said, standing up and putting on his sweatpants, tossing my blouse towards me. I fumbled and stuttered. I tried to explain that I hadn’t trusted him before and that I was sorry, but I did now. I was a changed woman! He was reaching for the door when a ringing interrupted my revelation.

“Who is calling you this early?” I asked and then covered my mouth.

“Apparently some changes take longer than you thought,” he said as he held the door open for me to leave. He was right. A scathing heartbreak had started these bad habits, but if I didn’t stop them now, I would only continue pushing love out of my life.

Just because I was questioning myself, didn’t justify my questioning him. It was time for me to go into hiding. I began a hiatus from dating that would last one year. I traveled alone. I slept alone. I polled girlfriends who kept tabs on their other halves. I saw a therapist. I forgave my ex-husband. I forgave myself. I did all of this to find the answer to the one question Philip asked me the last time we spoke: What was I looking for?

That night, almost a decade ago, when I sat clutching pages, waiting for my ex-husband to come home, I didn’t know what I would say to him. But I believed that if he could tell me the truth, no matter what it was, I would forgive him. I had no idea how much strength it takes to look at someone that wants to be with you and tell them you want out. Andrew wasn’t strong enough to tell me. I wasn’t strong enough to tell Philip.

That was then. I don’t consider myself reformed but in remission. When I feel the boiling, the building up, the need to peek or prod -- I examine myself instead. These days, I’ll leave when I know that someone is not what I want or need. I don’t have to wait for the findings of a doubt-fueled, late-night ransack to confirm it.