What's in store for the year ahead? 2015 political predictions

2016 rapidly approaches, but the presidential campaign won't be the only story of consequence 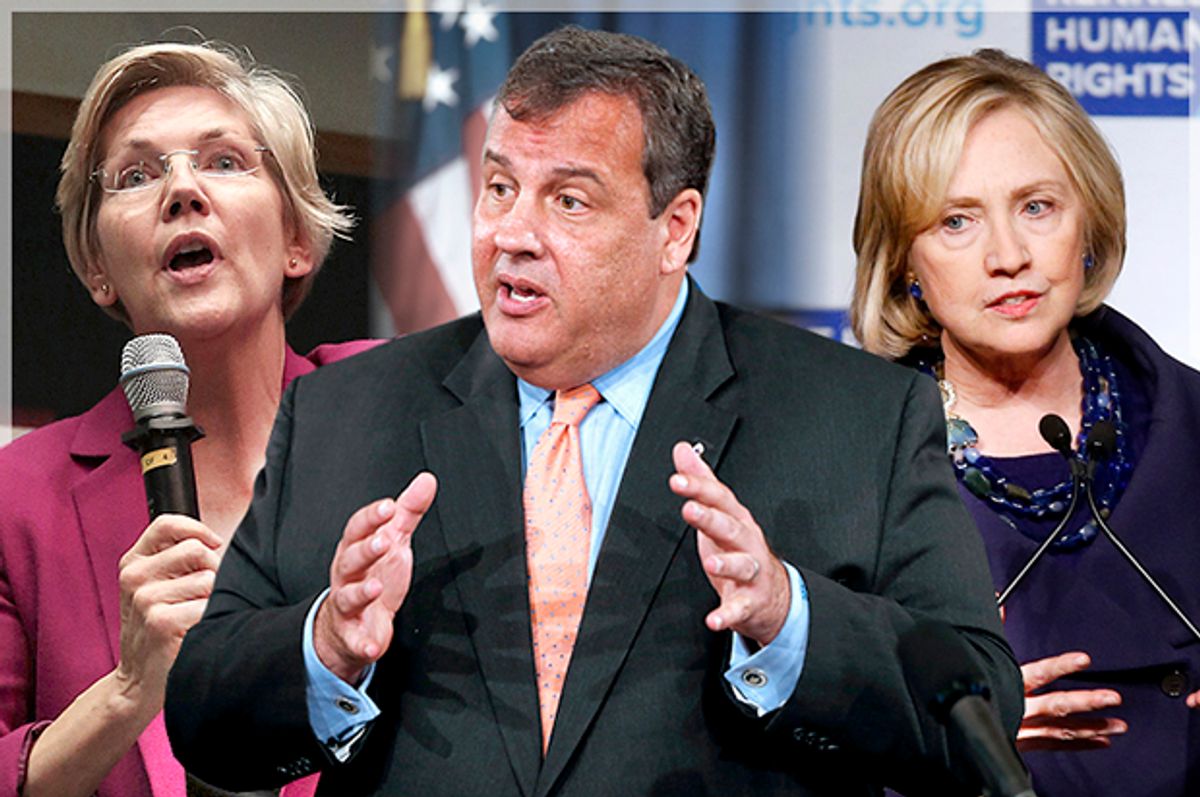 The 2014 retrospectives have largely been written -- national and international unrest recalled, the midterm results thoroughly dissected, those we lost paid tribute, the greater significance of it all divined. What's a writer to do, then, but wildly speculate about what lies in store for the year ahead?

Okay, some of my 2015 political predictions don't quite fall into the "wild speculation" category, but there are some that I hope will look wrongheaded when read a year from now. (And no, the one about Chris Christie continuing his downward spiral in presidential politics isn't one of those.) Some are based on pure tea leaf-reading, others on an abundance of accumulating evidence. Here, without further delay, are five.

While much of the post-midterms commentary has focused on President Obama's surprising boldness on a number of fronts -- immigration reform, climate change, the rapprochement with Cuba -- he will find some measures on which he agrees with the Republican Congress. For all the right-wing depictions of the president as a radical Marxist bent on upending America, he remains a fundamentally centrist politician, and no issue better reflects Obama's centrism than his support for free trade.

Despite mounting progressive unease with the Trans-Pacific Partnership agreement (TPP), which includes the U.S. and 11 other Pacific nations, the GOP majority is likely to approve the pact this year. Incoming Senate Majority Leader Mitch McConnell has indicated that TPP is a priority, and while a small number of Tea Party conservatives join progressives like Sen. Elizabeth Warren in expressing reservations about the agreement's corporate giveaways, the bulk of the congressional GOP supports free trade agreements, as do many Democrats.

On other issues, like tax reform, the gulf between GOP and Democratic priorities will likely prove too vast to forge agreement, so trade looks like the most likely area in which Obama and newly emboldened Republicans will work together.

Hillary Clinton will announce her White House bid in March

If Hillary Clinton had no intention of seeking the presidency, she'd probably have announced it by now. Assembling the resources necessary for a credible presidential campaign requires years of arduous work, and if Clinton decided not to run, she'd need to let other potential candidates know early so they could be prepared to run in a Clinton-less field. The fact that Clinton has made no such announcement, and that only a handful of long-shot candidates like Martin O'Malley and Jim Webb are proceeding with plans to run, strongly suggests that she will run for the White House a second time.

Clinton will be in no rush to announce, however. With a veritable political machine behind her, Clinton will hardly struggle to put together a campaign infrastructure. So unlike the 2008 cycle, when she announced her campaign in January 2007 -- primarily because Obama's entry into the race forced her to expedite her plans -- Clinton will probably wait until around March, particularly given that she seems unlikely to face an Obama-level challenger for the nomination.

Elizabeth Warren will contemplate -- but decide against -- a presidential campaign

While Warren insists that she's not running for president, the intensifying progressive push to draft the senator into the 2016 race underscores that there's a vibrant segment of the Democratic Party eager to see a progressive populist in the contest. The buzz surrounding the Warren 2016 movement may also lead to a modest improvement in her polling numbers -- most surveys show her running a very distant second to Clinton -- which in turn may convince Warren and her backers that winning the nomination wouldn't be an impossible feat, after all.

But even some people who want to see Warren in the campaign -- including Minnesota congressman Keith Ellison, chairman of the Congressional Progressive Caucus -- tout Warren as someone who may not win, but would make Clinton a stronger, more progressive candidate. But it's unlikely that Warren would run as a sacrificial lamb solely for the purpose of strengthening Clinton, particularly given that a losing campaign could undermine Warren's clout in the Senate.

Yet though Clinton is far better-positioned than she ever was in 2008, it isn't inconceivable that Warren could give her a serious scare; the senator would certainly come far closer to Clinton than the early-stage polling suggests. My prediction: like Christie, who adamantly insisted he wouldn't run for president in 2012 but then gave it some serious thought following entreaties from GOP donors, Warren will take a hard look at running, but ultimately decide against it. Sure, Warren is an impassioned advocate for progressive policies, but she doesn't strike one as the kind of person who believes she can only achieve them from the Oval Office.

One issue on which Warren has led from the Senate has been her charge against the nomination of investment banker Antonio Weiss to the position of undersecretary of the Treasury for domestic finance. Warren notes that Weiss' background is in international banking, not domestic finance, and she has also raised concerns about his role in corporate tax inversions and the overrepresentation of Wall Street in government positions.

Democrats ranging from the progressive Tammy Baldwin to the conservative Joe Manchin have joined Warren in opposing Weiss, and enough Democrats now oppose him that he will need GOP votes to secure confirmation. But since Weiss has donated heavily to Democratic candidates and causes and Republicans may be content to allow Democrats to duke it out over Weiss' nomination, it's hard to see many GOPers rallying behind him. Most remain undecided on Weiss' nomination, while only a few have said they'd vote for him.

My prediction: in a major victory for Warren, Weiss will withdraw his nomination early in 2015, citing the desire to avoid a contentious and uncertain confirmation process.

Chris Christie will flounder as a presidential candidate

Chris Christie wants to be president, but it's exceedingly apparent that his moment will never arrive. That won't stop the New Jersey governor from running, however. 2015 won't be kind to Christie, who, like John McCain in 2007, will languish in the polls -- but unlike McCain, won't ever come back. The elite donor class that clamored for Christie in 2012 has largely moved on to Jeb Bush, who looks like a near-certain candidate. Moreover, the whiff of scandal surrounding Christie and his disastrous management of New Jersey's economy -- that state's credit rating has been downgraded eight times during his five-year tenure -- will prevent him from ever gaining serious traction.