I'm trying not to hate men

After a year when misogyny and male violence dominated headlines, I want to find a way out of fear and bitterness 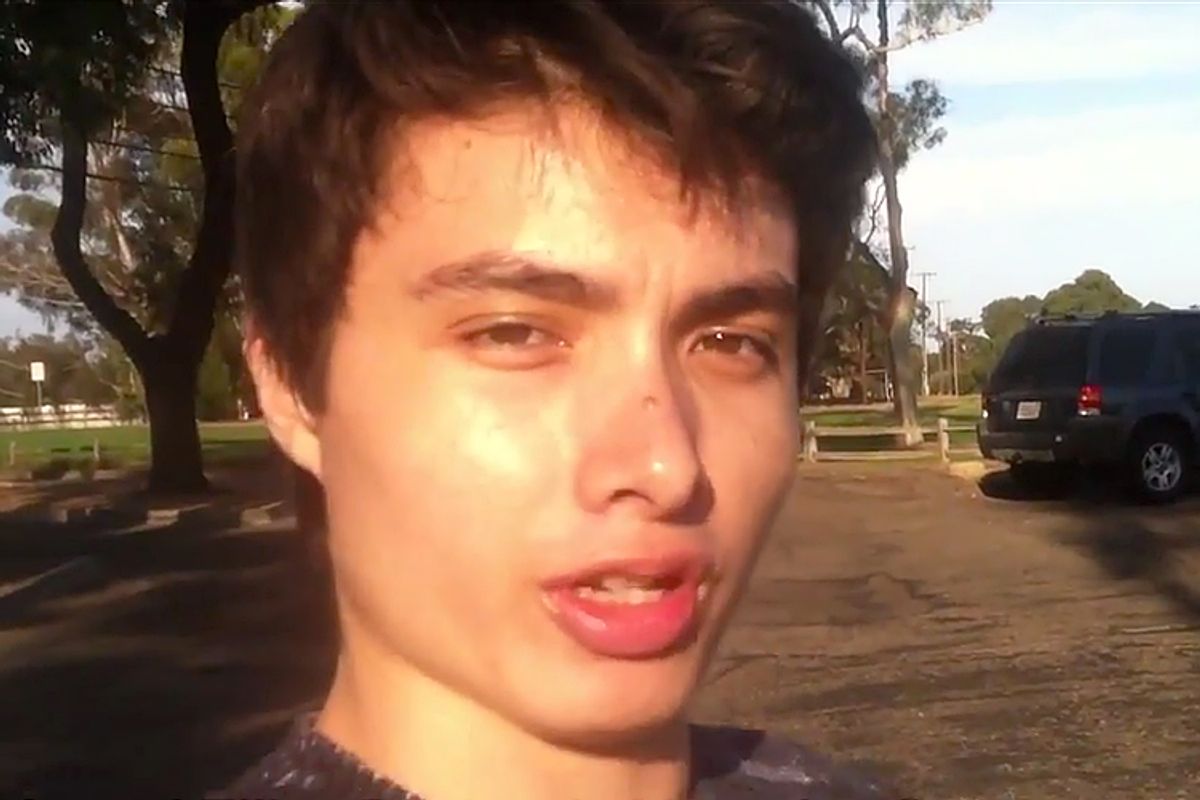 When I finally told my mother that the neighbor boy she’d been “babysitting” — which meant leaving the two of us alone together while she watched her soap operas upstairs — had started “touching me in weird ways,” she told me, with a forcefulness I’d never heard in her voice before, to never ever say anything to my father, because “Daddy would kill him,” and “we’d lose Daddy forever.” And we certainly didn’t want that.

My father was the flint-fisted epitome of the “alpha male” that the pick-up artists and the frat boy wolf packs aspired to be. My mother and I were images in a photo frame that assured his bosses he was a family man, a man who could be trusted. We were bellies and backs and cheeks, the soft places that bore his anger, or any feeling that found expression in his fists. And he was the axis of the turning world—at least to my mother, who sent my abuser (a choir boy, a Boy Scout) home to his parents with a polite explanation that he was simply “too old” to be babysat. Until his family moved, I’d see him at the bus stop, and that copper-penny taste of fear would flood my mouth.

Before I could ever know anything different, this was maleness: aggression and protection, equally awful. Something cowardly and brute, something that hit you with its belt and pulled you beneath your favorite Lion King blanket and stuck its fingers into your vagina. My mind was still a dark house, waiting for positive moments—happy memories in the making—to light up each room. My father took a hammer to the circuit box, left me to wander the rooms of that dark house; and the neighbor boy who made “a secret game” of putting his hands under my dress while we sat on the couch, watching videos of Disney princesses whose happy endings came in a man’s kiss, pulled me into the basement.

Sometimes I still wake up with that copper-penny taste in my mouth, only this time, it’s not just fear—it’s anger: Every day brings some fresh Hell of sexual and gender-based violence. In her book “Men Explain Things to Me,” Rebecca Solnit writes, “Violence doesn’t have a race, a class, a religion, or a nationality, but it does have a gender.” And in an interview with Democracy Now after the shootings in Isla Vista, in which Elliot Rodger spread terror across a college campus, Solnit elaborates, “Every woman, every day, when she leaves her house, starts to think about safety … women are so hemmed in by fear of men, it profoundly limits our lives.”

But I live in, if not a man’s world (at least, not always), a world of men. They are the co-workers who treat me with respect; the editors who’ve shepherded my essays with insight and kindness; and the men who are loyal, loving partners to my good girlfriends. And yet, there is always a part of me that is always in that dark house, always feeling my way around the walls, waiting for some unseen object to trip on or bruise against.

I am not alone here. A perfunctory glance at the trending section of any Facebook feed shows the bombs still dropping in the War on Women: schoolgirls kidnapped and sold into sexual slavery, or shot in the head execution-style on a crowded bus; young women gunned down on a college campus, or cold-cocked in elevators; activists threatened with rape and death, driven out of their homes for challenging sexist tropes in video games. And women around the world responded to these traumas with their dispatches from the front lines: Reading response pieces, following Twitter, talking to friends, it seems like #YesAllWomen have suffered because of some man, somewhere.

These stories are remarkable because they’re not remarkable: Anticipating—and enduring—violence is part and parcel of being a woman. The batterers and rapists, terrorists and trolls may not be all men, but, by and large, they are men. As Kate Harding writes, “Of course it’s not all men. The idea that anyone might be talking about all men when talking about those who commit violence against women is ludicrous on its face … It’s not all men. But listen, you guys, it’s men.” My mistrust can become a siren of sorts: It curls its finger and sings linger in your fear. Let all men be the father who beat you with his belt, the boy who molested you, the cab driver who grabbed your one friend, and the then-boyfriend who pushed another friend against a wall.

After the Isla Vista shootings, I told girlfriends that I’d always regarded men the way that Magneto regarded humans. Magneto, for the uninitiated, is the mastermind behind the mutant separatist movement within the X-Men universe; he plucks an asteroid from the coldest orbit and turns it into Asteroid M, a mutant-only refuge. I’d built my own Asteroid W of women friends and bosses, icons and mentors. Men became some distant planet I’d enter whenever I needed something I could only find on the black market. But an asteroid is cold and airless; it can’t sustain life.

There is no single moment when I decided I wanted the warmth of a new atmosphere. Personal essays like this one usually hinge on that moment of epiphany: a moment that feels as sudden and inevitable as lightning. But my choice—to stop thinking of those men as all men—is a slow and constant evolution. Perhaps the evolution begins when my father, newly sober, makes his amends, tells me he would die to undo our past; and, in time, I see that misogyny hurt him, too, taught him that he had to wear the crown even if it cost him the kingdom. And that apology makes me understand that even the boogeyman is human.

The evolution continues under the mentorship of a female supervisor who weathered decades in the workforce, starting back when all professions were male-dominated. She showed me how to honey-tongue clients and write great ledes. She was brilliant and wry, had a career she cared about and friends she loved. But she was one of the bitterest people I’ve ever known. She followed up every story about a male boss who’d harassed her with impunity or about a garden-variety bad date with an inevitable, “it’s all men. I don’t care what anyone says, they’re all like that.” As she’d speak, she’d arrange her face to seem so above-it-all and cool, but her pain still beat its fists against the ice. That pain didn’t soften with the heat of her righteous indignation; it cracked and strained under its own weight.

As I walked out of her office one morning, I realized that I’d heard those words before, in a more mewling tone. My mother chose my father’s freedom over my justice at every turn. “That’s just how men get,” she’d say. My mother survived by believing she was in thrall to a man with a temper, and that temper was simply a natural expression of his masculine passion. She traded my justice for his freedom every time. Whenever I confronted her (sometimes cold and sober, other times drunk and burning) about how she could’ve possibly allowed the boy who turned my body into a toy to walk away unpunished, she’d say, “But it wasn’t rape. It wasn’t as bad.” This is the language of the defeated, the willfully oppressed. This is how violence becomes something to be shucked off with a smile and an “oh, you.”

My mother equated love with craven codependence, and though I swore that I’d be stronger than she was, I still flailed in the tar pit of her thinking. And, like all things trapped in that boiling black, I began to ossify. I couldn’t afford to be weak; instead, I was always afraid. As I tilt headlong into my thirties, and my friends ask for my help in prettying up their vows, something inside me cracks and steams. I have carried my father, and the neighbor boy, inside me as ghosts. In giving, and receiving, a loving touch, I push away the hands that have haunted me.

I don’t want to be my mother’s daughter or my father’s victim. I don’t want to be the woman who survived the first boy who kissed her on the mouth and whispered something sick and dirty—I want to truly live.  To heal, the way that so many other women who have been abused and abandoned, have healed: callused, but not scarred. The slow pumicing of my heart comes in distinguishing misogyny from masculinity: rubbing away the grit of years and years of an instinct that didn’t protect me through common sense or savvy, just isolation.

I think of this isolation as I read “Wild,” Cheryl Strayed’s account of hiking the Pacific Crest Trail alone; the specter of  “wilderness-savvy serial killers” and other violent men is as natural a fear as the rattlesnakes and mountain lions. Every time she accepts a ride from a man or joins up with a group of young dudes, she takes a risk. Though she does encounter menace on the trail (most chillingly with a pair of leering hunters), her risks are rewarded with friendship and tenderness, from the good ol’ boy who brings her home for a hot shower and a warm meal to the experienced outdoorsman who helps her strategically lighten her spine-crushing backpack; the “three young bucks” who keep her company and the handsome townie who gives her a night of bliss. “I knew that if I allowed fear to overtake me, my journey was doomed,” she writes. “Fear begets fear. Power begets power. I willed myself to beget power. And it wasn’t long before I actually wasn’t afraid.” I’m willing myself to beget trust.

Recently, I left work late, after almost everyone else had already cleared out. I was alone in the parking garage elevator, until a man I’ve seen around the building (though he doesn’t work in my office), thrust his arm between the doors just before they closed. My pulsed hiccupped. I felt myself stiffen, my body ram-rod to its old message: “don’t fucking talk to me.” I took instant inventory of his features: five-foot, seven inches (give or take), portly build, and black hair with a slight curl. His hazel eyes flitted around the elevator nervously; he’d measured me up as well, sensed my anxiety. He asks me, in a neighborly voice, what my plans for the weekend are. And I realize that he gets it: He wants me to be at ease. So I tell him about a movie I hope to see, and he says that he likes the lead actress; she seems smarter than the average Hollywood type.  The ride is short, barely a minute.  But in that minute, I walk through the rooms of my dark house, lighting candles.