God is on the ropes: The brilliant new science that has creationists and the Christian right terrified 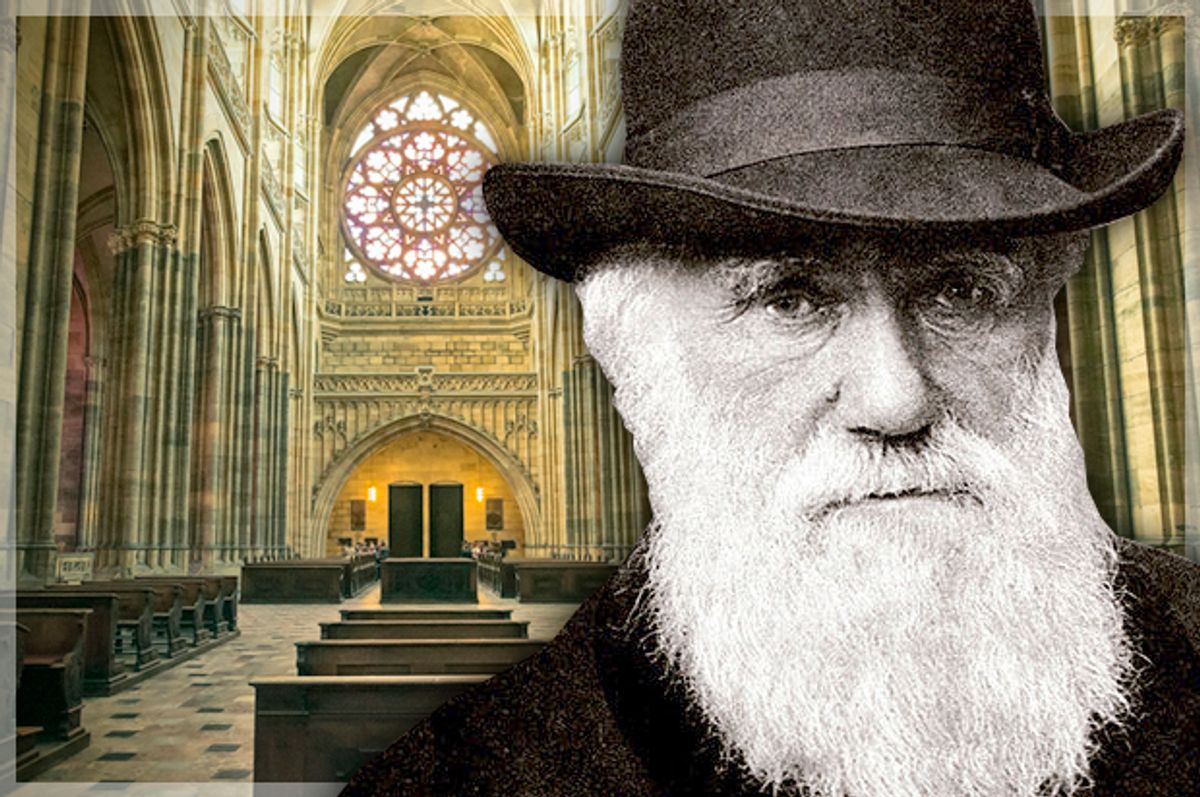 The Christian right’s obsessive hatred of Darwin is a wonder to behold, but it could someday be rivaled by the hatred of someone you’ve probably never even heard of. Darwin earned their hatred because he explained the evolution of life in a way that doesn't require the hand of God. Darwin didn’t exclude God, of course, though many creationists seem incapable of grasping this point. But he didn’t require God, either, and that was enough to drive some people mad.

Darwin also didn’t have anything to say about how life got started in the first place — which still leaves a mighty big role for God to play, for those who are so inclined. But that could be about to change, and things could get a whole lot worse for creationists because of Jeremy England, a young MIT professor who's proposed a theory, based in thermodynamics, showing that the emergence of life was not accidental, but necessary. "[U]nder certain conditions, matter inexorably acquires the key physical attribute associated with life," he was quoted as saying in an article in Quanta magazine early in 2014, that’s since been republished by Scientific American and, more recently, by Business Insider. In essence, he’s saying, life itself evolved out of simpler non-living systems.

The notion of an evolutionary process broader than life itself is not entirely new. Indeed, there’s evidence, recounted by Eric Havelock in "The Liberal Temper in Greek Politics," that it was held by the pre-Socratic natural philosophers, who also first gave us the concept of the atom, among many other things. But unlike them or other earlier precursors, England has a specific, unifying, testable evolutionary mechanism in mind.

Quanta fleshed things out a bit more like this:

From the standpoint of physics, there is one essential difference between living things and inanimate clumps of carbon atoms: The former tend to be much better at capturing energy from their environment and dissipating that energy as heat. Jeremy England, a 31-year-old assistant professor at the Massachusetts Institute of Technology, has derived a mathematical formula that he believes explains this capacity. The formula, based on established physics, indicates that when a group of atoms is driven by an external source of energy (like the sun or chemical fuel) and surrounded by a heat bath (like the ocean or atmosphere), it will often gradually restructure itself in order to dissipate increasingly more energy. This could mean that under certain conditions, matter inexorably acquires the key physical attribute associated with life.

It doesn’t mean we should expect life everywhere in the universe — lack of a decent atmosphere or being too far from the sun still makes most of our solar system inhospitable for life with or without England’s perspective. But it does mean that “under certain conditions” where life is possible — as it is here on Earth, obviously — it is also quite probable, if not, ultimately, inevitable. Indeed, life on Earth could well have developed multiple times independently of each other, or all at once, or both. The first truly living organism could have had hundreds, perhaps thousands of siblings, all born not from a single physical parent, but from a physical system, literally pregnant with the possibility of producing life. And similar multiple births of life could have happened repeatedly at different points in time.

That also means that Earth-like planets circling other suns would have a much higher likelihood of carrying life as well. We’re fortunate to have substantial oceans as well as an atmosphere — the heat baths referred to above — but England’s theory suggests we could get life with just one of them — and even with much smaller versions, given enough time. Giordano Bruno, who was burnt at the stake for heresy in 1600, was perhaps the first to take Copernicanism to its logical extension, speculating that stars were other suns, circled by other worlds, populated by beings like ourselves. His extreme minority view in his own time now looks better than ever, thanks to England.

If England’s theory works out, it will obviously be an epochal scientific advance. But on a lighter note, it will also be a fitting rebuke to pseudo-scientific creationists, who have long mistakenly claimed that thermodynamics disproves evolution (here, for example), the exact opposite of what England’s work is designed to show — that thermodynamics drives evolution, starting even before life itself first appears, with a physics-based logic that applies equally to living and non-living matter.

Most important in this regard is the Second Law of Thermodynamics, which states that in any closed process, there is an increase in the total entropy (roughly speaking, a measure of disorder). The increase in disorder is the opposite of increasing order due to evolution, the creationists reason, ergo — a contradiction! Overlooking the crucial word “closed,” of course. There are various equivalent ways of stating the law, one of which is that energy cannot pass from a cooler to a warmer body without extra work being done. Ginsberg's theorem (as in poet Allen Ginsberg) puts it like this: "You can't win. You can't break even. You can't even get out of the game." Although creationists have long mistakenly believed that evolution is a violation of the Second Law, actual scientists have not. For example, physicist Stephen G. Brush, writing for the American Physical Society in 2000, in "Creationism Versus Physical Science," noted: "As Ludwig Boltzmann noted more than a century ago, thermodynamics correctly interpreted does not just allow Darwinian evolution, it favors it."

A simple explanation of this comes from a document in the thermodynamics FAQ subsection of TalkOrigins Archive (the  first and foremost online repository of reliable information on the creation/evolution controversy), which in part explains:

Creationists thus misinterpret the 2nd law to say that things invariably progress from order to disorder.

That passage goes right to the heart of the matter. Evolution is no more a violation of the Second Law than life itself is. A more extensive, lighthearted, non-technical treatment of the creationist’s misunderstanding and what’s really going on can be found here.

Snowflakes, sand dunes, tornadoes, stalactites, graded river beds, and lightning are just a few examples of order coming from disorder in nature; none require an intelligent program to achieve that order. In any nontrivial system with lots of energy flowing through it, you are almost certain to find order arising somewhere in the system. If order from disorder is supposed to violate the 2nd law of thermodynamics, why is it ubiquitous in nature?

In a very real sense, Prigogine’s work laid the foundations for what England is doing today, which is why it might be overstated to credit England with originating this theory, as several commentators at Quanta pointed out, noting other progenitors as well (here, here and here, among others). But already England appears to have assembled a collection of analytical tools, along with a sophisticated multidisciplinary theoretical approach, which promises to do much more than simply propound a theory, but to generate a whole new research agenda giving detailed meaning to that theoretical conjecture. And that research agenda is already starting to produce results. (See his research group home page for more.) It’s the development of this sort of detailed body of specific mutually interrelated results that will distinguish England’s articulation of his theory from other earlier formulations that have not yet been translated into successful theory-testing research agendas.

Above all, as described on the home page mentioned above, England is involved in knitting together the understanding of life and various stages of life-like processes combining the perspectives of biology and physics:

Living things are good at collecting information about their surroundings, and at putting that information to use through the ways they interact with their environment so as to survive and replicate themselves. Thus, talking about biology inevitably leads to talking about decision, purpose, and function.

At the same time, living things are also made of atoms that, in and of themselves, have no particular function. Rather, molecules and the atoms from which they are built exhibit well-defined physical properties having to do with how they bounce off of, stick to, and combine with each other across space and over time.

Making sense of life at the molecular level is all about building a bridge between these two different ways of looking at the world.

If that sounds intriguing, you might enjoy this hour-long presentation of his work (with splashes of local Swedish color) — especially (but not only) if you’re a science nerd.

Whether or not England’s theory proves out in the end, he’s already doing quite a lot to build that bridge between worldviews and inspire others to make similar efforts. Science is not just about making new discoveries, but about seeing the world in new ways — which then makes new discoveries almost inevitable. And England has already succeeded in that.  As the Quanta article explained:

England’s theoretical results are generally considered valid. It is his interpretation — that his formula represents the driving force behind a class of phenomena in nature that includes life — that remains unproven. But already, there are ideas about how to test that interpretation in the lab.

“He’s trying something radically different,” said Mara Prentiss, a professor of physics at Harvard who is contemplating such an experiment after learning about England’s work. “As an organizing lens, I think he has a fabulous idea. Right or wrong, it’s going to be very much worth the investigation.”

Creationists often cast themselves as humble servants of God, and paint scientists as arrogant, know-it-all rebels against him. But, unsurprisingly, they’ve got it all backwards, once again. England’s work reminds us that it’s scientists' willingness to admit our own ignorance and confront it head on — rather than papering over it — that unlocks the great storehouse of wonders we live in and gives us our most challenging, satisfying quests.