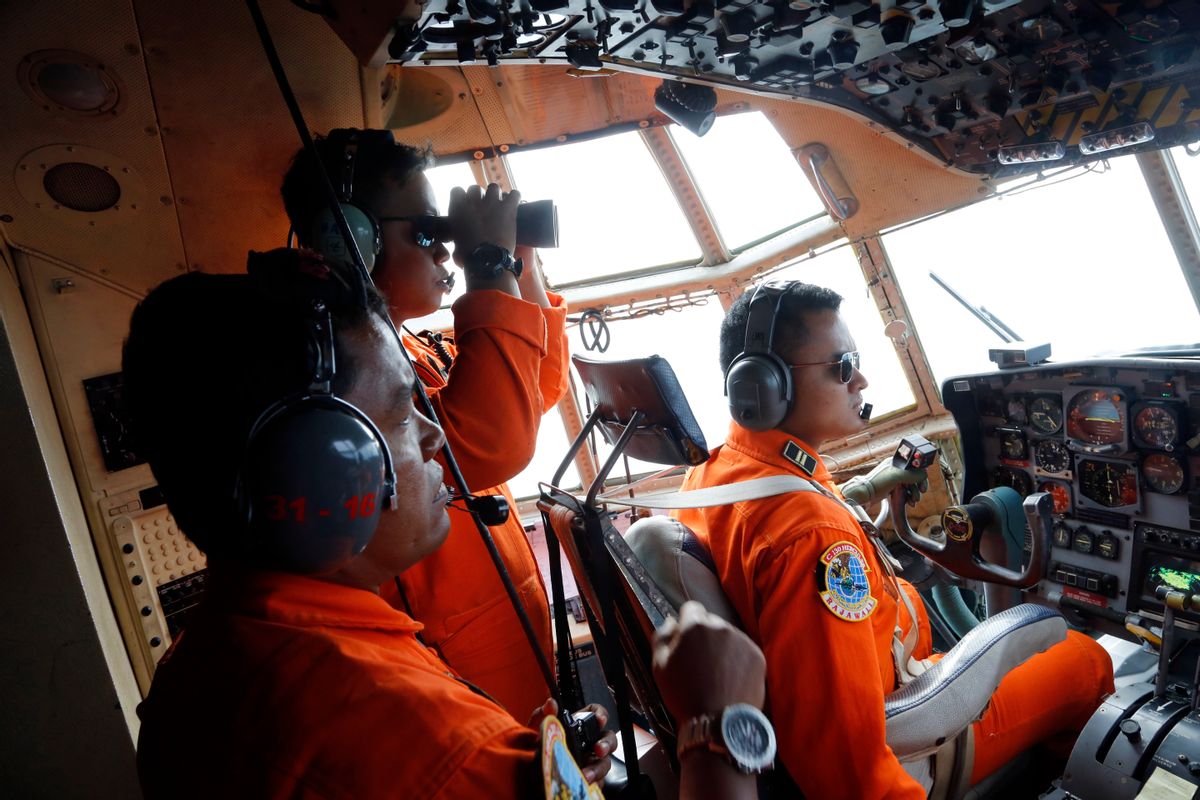 Crew of Indonesian Air Force C-130 airplane of the 31st Air Squadron scan the horizon during a search operation for the missing AirAsia flight 8501 jetliner over the waters of Karimata Strait in Indonesia, Monday, Dec. 29, 2014. Search planes and ships from several countries on Monday were scouring Indonesian waters over which an AirAsia jet disappeared, more than a day into the region's latest aviation mystery. AirAsia Flight 8501 vanished Sunday in airspace thick with storm clouds on its way from Surabaya, Indonesia, to Singapore. (AP Photo/Dita Alangkara) (Dita Alangkara)
--

Search teams began to pull bodies out of the water off southern Borneo as another aviation tragedy struck Asia in the crash of AirAsia Flight 8501 carrying 162 people on Dec. 28. Many victims were Christian families flying from Surabaya to Singapore for a New Year's holiday. It was the third air disaster linked to Malaysia, where AirAsia is based, after the disappearance in March of a Malaysia Airlines flight bound for Beijing — none of which has been found — and the shooting down of a Malaysia Airlines plane above rebel-held eastern Ukraine in July.

Asia welcomed the start of 2015 with fireworks in Sydney and hundreds of other cities around the region. But in slums north of Manila, firefighters had to put out a huge fire believed to have been ignited by firecrackers.

A few days later, Myanmar marked its 67th anniversary of Independence Day with a parade of armored cars and tanks.

In what a magazine in Seoul called the "Hacker War," the U.S. imposed a new round of sanctions on North Korea for its cyberattack against Sony that led to the disclosure of tens of thousands of confidential emails and business files, then escalated to threats of terrorist attacks against movie theaters. North Korea denies the cyberattack, but it was outraged over the Sony comedy "The Interview," which depicts a fictional assassination plot against North Korean leader Kim Jong Un. Sony initially called off the film's release but later decided to release the film in a limited number of theaters and online.