I'm terrified that he'll inherit my brokenness: Living through postpartum depression as a dad

My first child is the greatest source of joy in my life. So why am I so deeply sad? 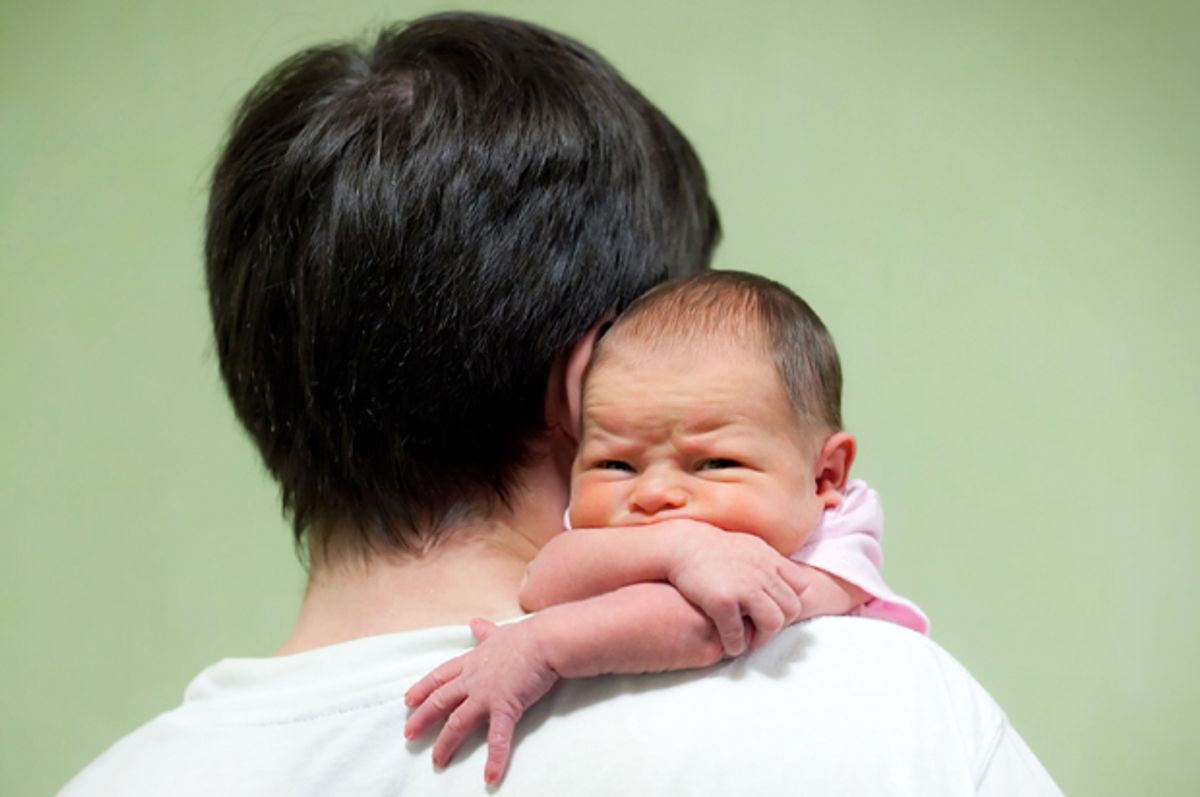 When you become a parent for the first time in our culture you are almost invariably told the following things, often by the same people, often in the same spiel:

1) Parenthood is the most wonderful, life-affirming, purposeful experience anyone can have. It will enhance your life in ways you can never imagine, make you complete and fill you with a real, substantive joy nothing else can match, not professional achievement, not wealth, not anything. No matter what you do, being a parent is your most important job, and the one with the highest stakes.

2) Parenthood is the single most difficult and painful experience of anyone’s life. You will make sacrifices you never imagined possible, give up countless things that currently give you pleasure and, if you are any kind of a parent at all, put your child’s needs beyond your own. Your life is no longer your own. It is your child’s.

I am from the Midwest, so it has long been ingrained in me that anything that is worthwhile is also inveterately hard, if not downright impossible. Yet I cannot help but be struck by the cognitive dissonance in these two conceptions of parenthood even as I have experienced them, deep in my bones, as my first son was born.

My son was born Oct. 12 of this year, three weeks premature but otherwise perfectly healthy, even if we needed to spend his first week in the NICU. Ironically or not, that hospital is now one of my favorite places in the world, because it is a continual reminder of a place where I could be strong for my wife, and help usher her through an extraordinarily tough pregnancy and birth.

When he was finally born via C-section, my son was more than healthy: He was beautiful, angelic, with bright eyes and a perfect little mouth. It was hard to conceive that anything so beautiful and pure could have started with me.

Yet for the last three months I have been in a state of deep depression, terrified that I will fail my son in countless ways, scared that the brokenness I have always felt deep inside will be passed down to my son, that despite the innocence and light in his eyes he can sense that there is something deeply wrong with his father no matter how desperately he wants his son to be happy, to experience the uncomplicated joy I seldom knew as a child.

I am terrified that the selfishness endemic in depression will keep me from being truly present for the first few months of my son’s life, that even though he’s barely conscious of the world when he looks into my eyes he can sense my confusion and sadness and shame. I am terrified that I will not be able to provide for my son in so many ways, that I will let him down.

Part of this is rooted in my own tortured babyhood. My parents got divorced when I was 2 years old and my mother abandoned me. My father got custody and though he was loving and kind he was also sick with multiple sclerosis and broke, living off a government pension after quitting his government job in his mid-30s.

My father loved me with all his heart and tried his damnedest to care for me but trying to provide for himself and two children on about $14,000 a year was too much for him and I spent my adolescence in, respectively, a mental hospital for a month, a foster family for a month, and a group home for four or five years.

So as an adolescent I had an extensive education in the infinite ways that parents can, and will, and do, fail their children, despite the best of intentions. And my dad is a wonderful father, he just did not have the resources, emotionally or financially, to handle the monumental task of being a single father to two complicated children.

I bore the brunt of my mother’s abandonment and my father’s inability to take care of me, but I also felt my proud father’s shame at not being to do what he desperately wanted to, at not being able to be the husband, father and provider he was bred from an early age to be. I knew how badly my dad wanted to be a traditional father and how much it pained him to fall short.

So perhaps it is not a surprise that I waited until I was in my late 30s before I had my first child. It was not something I was going to enter into lightly, if at all. To me, it seemed like parenthood was a strange form of magic I didn’t know I was capable of, and I wanted to wait until I was in the ideal place in my life before becoming a parent.

Of course there is no ideal time to become a parent, and though my wife and I love each and are gainfully employed and own our own home, the prospect of childcare and the logistical and emotional demands of parenthood have exacerbated every anxiety I’ve ever had about not being able to be the man, and particularly the father, I want and need to be.

About a week after our son was born he went to live with his mother and grandmother in their home town of Atlanta where her loving and affluent parents would be able to support her and the baby in ways that I never could. So I stayed behind in Chicago for three weeks to work and fell into a black hole emotionally. I felt lost without my wife and baby son. It felt as if my life had no meaning, that through no fault of my own I had become a deadbeat dad before my son was a month old.

And when my son came back I looked into his beautiful, empathetic eyes and had no idea whether my anxiety and fear reflected back. Holding my son and cradling my son and feeding my son was and is my greatest source of joy, of peace, of contentment, yet I feared that I would pass every genetic and emotional burden onto him, that the brokenness I felt so acutely would infect him as well.

Parenthood is so sacrosanct in our society that I am hesitant to share my anxieties and fears with other people for fear of being judged and judged harshly. Fatherhood is supposed to be such an unambiguous gift that to even acknowledge to other people that all the deeply buried neuroses and not so deeply buried fear about being able to support him and love him and care for him the way he deserves to be cared for would seem ungrateful and cruel, like I was an apostate against the Holy Church Of New Parenthood.

But here’s the thing: I’m sad and I’m terrified and I want so badly to be strong for my son, to have the strength, emotionally and otherwise, that I’ll need to raise him that it’s causing me to doubt myself at every turn. And it’s not like I have a problematic baby or anything. On the contrary, my baby is smiley and sweet and healthy. He is wonderful.

I don’t feel like I have the right to claim postpartum depression in part because my wife does just about everything. My wife is my son’s world. He is her food source and comfort and constant companion and god. I can’t help but feel irrelevant, like someone along for the ride who has little to contribute but regular diaper changing and bottle feedings and moral support that must mean nothing to a little dude who cannot understand the rudimentariness of language.

Thankfully, I have enough experience with depression to know that it goes in cycles and while it may seem terrifying and unbeatable when you’re in the thick of it, if you fight depression you can win victories and battles, even if the war as a whole may not be winnable.

So I owe it to my son and to myself to fight depression on every front. I owe it to him to seek therapy and talk to other people who are experiencing what I’m experiencing despite the deep shame and guilt that might entail. I want my son to know that life takes enormous strength and character and sometimes that strength and character takes the form of admitting to yourself and to the world, that you feel weak and sad and overwhelmed when the world is telling you you must be tough and brave and strong.

Nathan Rabin is the head writer of the Dissolve and the author of four books, including the memoirs "The Big Rewind" and "You Don’t Know Me but You Don’t Like Me."