A freedom-loving, fiscally conservative aging rock star defending his home with a shotgun--sounds like Oscar-bait 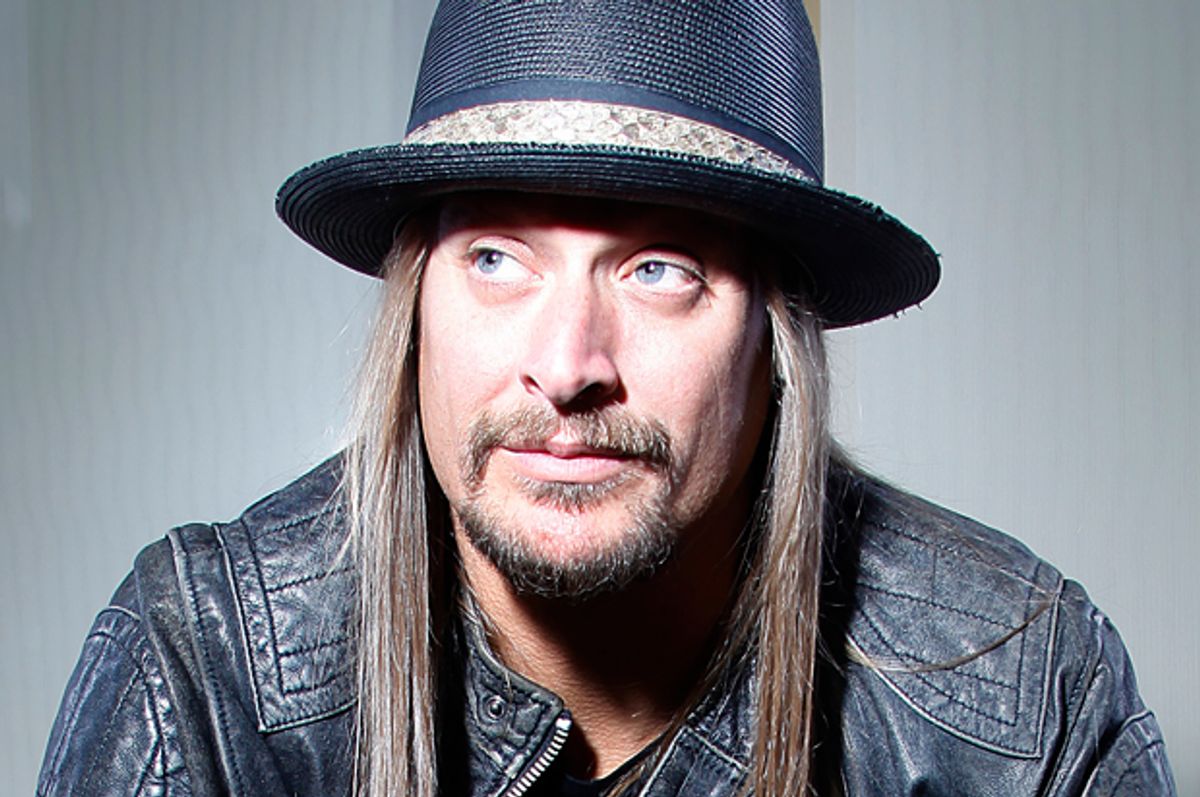 The list of things which Kid Rock currently knows, enumerated in a list published by The Guardian last weekend, is blessedly devoid of pearls of musical wisdom. At the end of the list, the pioneering rap-rocker concedes that his genre proved a fleeting fad, but he manages to turn that non-controversy into a statement on “politically correct” speech by calling the trend “pretty gay,” and then pre-emptively dismissing criticism of the slur by telling would-be detractors to “go fuck themselves.” It’s the kind of contrarian posture that solidifies his so-called “redneck street cred” more so than, as he claims, becoming a grandfather at 43 would.

Kid Rock is fiscally conservative, because he’s “not just wealthy, I’m loaded,” but socially moderate, if by a socially-moderate metric that says it’s cool to own a machine gun. He doesn’t smoke weed (“it makes me dumb”) but supports the legalization and taxation of all drugs. He's gone on record before about his pro-same-sex marriage stance, though he does admit to some personal queasiness over having to, as an ordained minister (who isn't?), actually perform a gay marriage ceremony. Personally, he’s anti-abortion, but “it’s not up to a man to tell a woman what to do,” which is actually kind of cool. “There have been a lot of women,” he modestly admits, thanks to his financial success, but he tempers his hard-earned hedonism with personal responsibility: “I learned to be careful. I didn’t want 10 kids around.”

Can you imagine the Eastwood script about the freedom-loving rap-rock star who retires to Detroit to defend his childhood home from copper thieves while modestly allowing himself to be talked into running for city council? Who doesn't really know how to act around gay people, and who occasionally fails to connect with his only son, now grown and on the cusp of fatherhood himself? As the Kid says, he “could have set a better example for my son. When he was a teenager I’d bring home girls that he had more in common with than I did.” When tapped to sweep up the ashes of the American Dream, his character could launch his impromptu campaign with a speech lifted straight from The Guardian: “Schoolbook-wise I’m not as educated as some politicians, but I am more connected to the people around me.” With Tom Stern’s brooding, monochromatic cinematography, it’s Oscar bait.

Kid Rock has in recent years courted public attention through his maverick political views (supporting Republicans because he’s unabashedly filthy rich, but then playing President Obama’s inauguration, for example) and his “redneck street cred” rock star playboy lifestyle rather than his music. And those views might even be malleable, depending on his business goals. We’re emerging from the Great Recession, so it’s no longer as dicey to brag about being a one-percenter, as long as you give the brag a humble PBR patina: “I’m not embarrassed—I’ve made a fuck-ton of money, but I’ve never made a dishonest dollar.” But when he wanted to launch a $20/ticket tour in 2013, he sounded way more liberal: “Athletes and musicians make astronomical amounts of money," he told Rolling Stone. "People get paid $100 million to throw a baseball! Shouldn't we all take less and pass some of that money onto others?” He’s a born politician.

Eastwood would likely take a pass on that whole “pass some of that money around” part of Kid Rock’s story. Oh, but this item from The Guardian piece? The part where Kid Rock says, “if someone invades your house, yeah, you can shoot them”? Well, let’s just say that brings all sorts of scripted possibilities to the table.