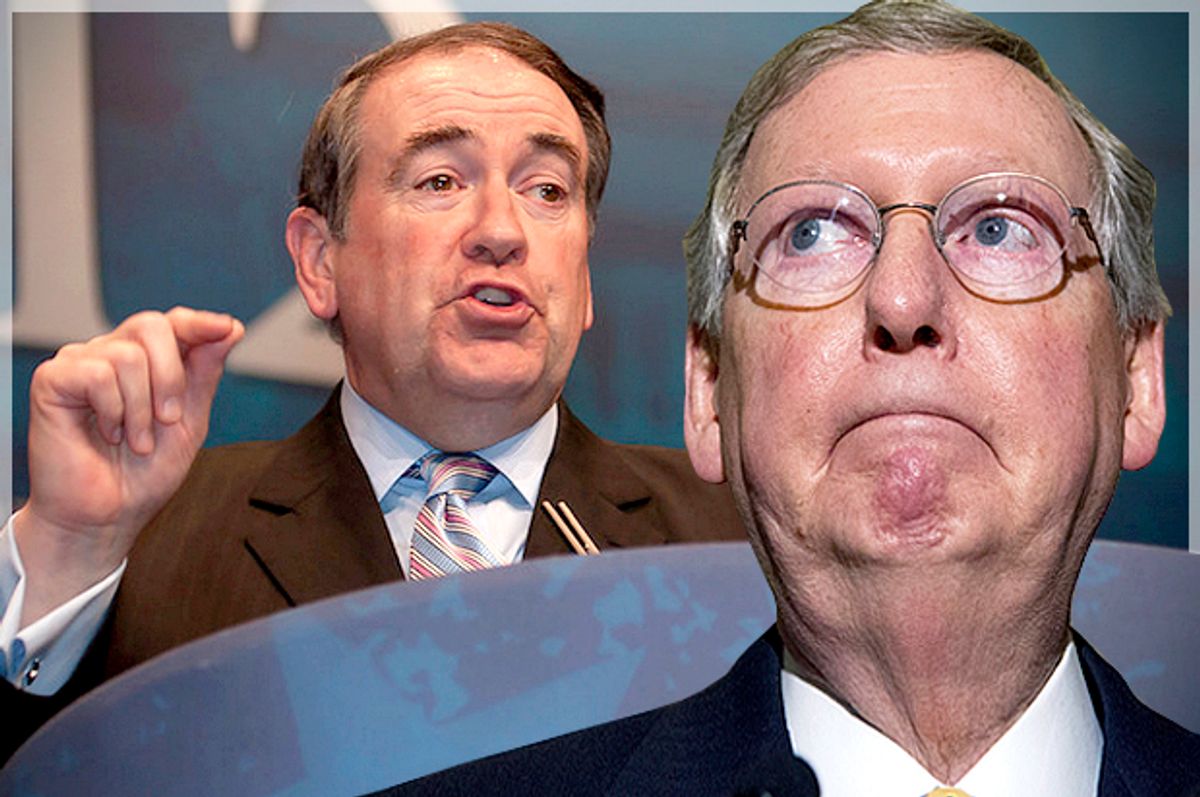 I know that the most wonderful time of the year has barely ended, and that many of us are still brushing cookie crumbs from our ugly sweaters and daydreaming about getting back home to spin our new Dr. Dreidel. And I know that the conventional view of 2014 is that it was a garbage year that featured an abnormally dispiriting election that most of us skipped and many of us would rather forget. But if we want to understand (and ultimately resist) the new Republican Party majority's latest self-serving narrative, it's worth taking another look at our recent past. Because there's reason to think that the style-over-substance approach that served Republicans so well last fall will be key to their messaging between now and 2016.

Before we take a step back, however, let's take a look at that self-serving narrative, which was best articulated by GOP Sen. Mitch McConnell in a Monday report from the Washington Post. According to the Post, one of the incoming Senate majority leader's main goals for 2015 is to prove to the American people that, despite what Democrats, liberals and many moderates may argue, the Republican Party of today is neither extreme nor "scary." Fittingly for a politician who often seems to only care about winning the next election, McConnell's mind is already on 2016. "I don’t want the American people to think that if they add a Republican president to a Republican Congress, that’s going to be a scary outcome," McConnell told the Post. "[T]he single best thing [congressional Republicans] can do," McConnell added, "is to not mess up the playing field, if you will, for whoever the nominee ultimately is."

McConnell avoids specifying exactly what being not-scary means, but it's a fair bet that it means not shutting down the government, not impeaching the president, and not saying outrageous things about Latinos and rape. McConnell has all but promised that his party has given up its recent strategy of obstruction and brinkmanship, and  even goes so far in his conversation with the Post as to brag that GOP leadership had finally rid itself of toxic candidates by taming the Tea Party beast. ("We will win all the primaries. We did it in ’14. We will do it in ’16.") Republicans still want to cut taxes for the 1 percent and repeal President Obama's signature reforms, but now they want to do it without the drama. Now that they've won back full control of Congress, in other words, the GOP establishment wants to persuade America that it's still the home of friendly, mild-mannered suburbanites, and that its embrace of Tea Party fanaticism in recent years was just a phase.

Close observers of U.S. politics, who understand that the GOP's lurch to the  far right began long before Barack Obama, will likely think this risible. But most Americans don't pay that kind of obsessive attention to politics (and fewer still are likely to take decades of ideological drift into consideration when casting their vote). You don't need to be an inveterate cynic to see this, either. You can simply look back at last year's election, when voters selected candidates like Joni Ernst and Cory Gardner, two talented candidates who, like many of the GOP's big winners in 2014, were radicals campaigning in moderates' clothing. And if that example is still too removed for your liking, you can look no further than the response to former Arkansas Gov. Mike Huckabee's entrance into the White House race this past weekend.

Indeed, when it comes to disguising a profoundly reactionary worldview with a veneer of reasonable affability, few have more experience and success than Huckabee, who announced on Saturday that he was leaving Fox News in order to "explore" another presidential bid. Huckabee became a national figure after proving himself to be an effective and charismatic campaigner during the fight to win the GOP presidential nomination for 2008, and his ubiquitous presence in right-wing media shows that he's only gotten better at presenting himself as a humble, God-fearing Southern gentleman in the years since.  As my colleague Luke Brinker detailed on Monday, Huckabee has a long history of religious extremism and bigotry (he once advocated forcibly quarantining AIDS patients, for example). But because his cruelty is usually delivered in dulcet tones and with an "aw, shucks" charm, he has a reputation for being, according to two members of the media elite, "genuinely nice."

To be clear, while I think Huckabee would be a disastrous president (albeit one in touch with this country's Jacksonian ethnic-cleansing roots) I'm not singling him out because I expect him to win. It's not even because I think what he's doing is especially innovative; Ronald Reagan was making Americans comfortable with their prejudices since at least the 1960s. Instead, the reason I focus on Huckabee is because he's the one high-profile Republican currently who is doing exactly what McConnell wants: making the GOP appear not-scary.  And if opponents of today's Republican Party don't find a way to expose Huckabee-style cheeriness for the facade that it is, they may find themselves spending the next two years ranting in vain about how the GOP's far-right agenda is anything but nice.