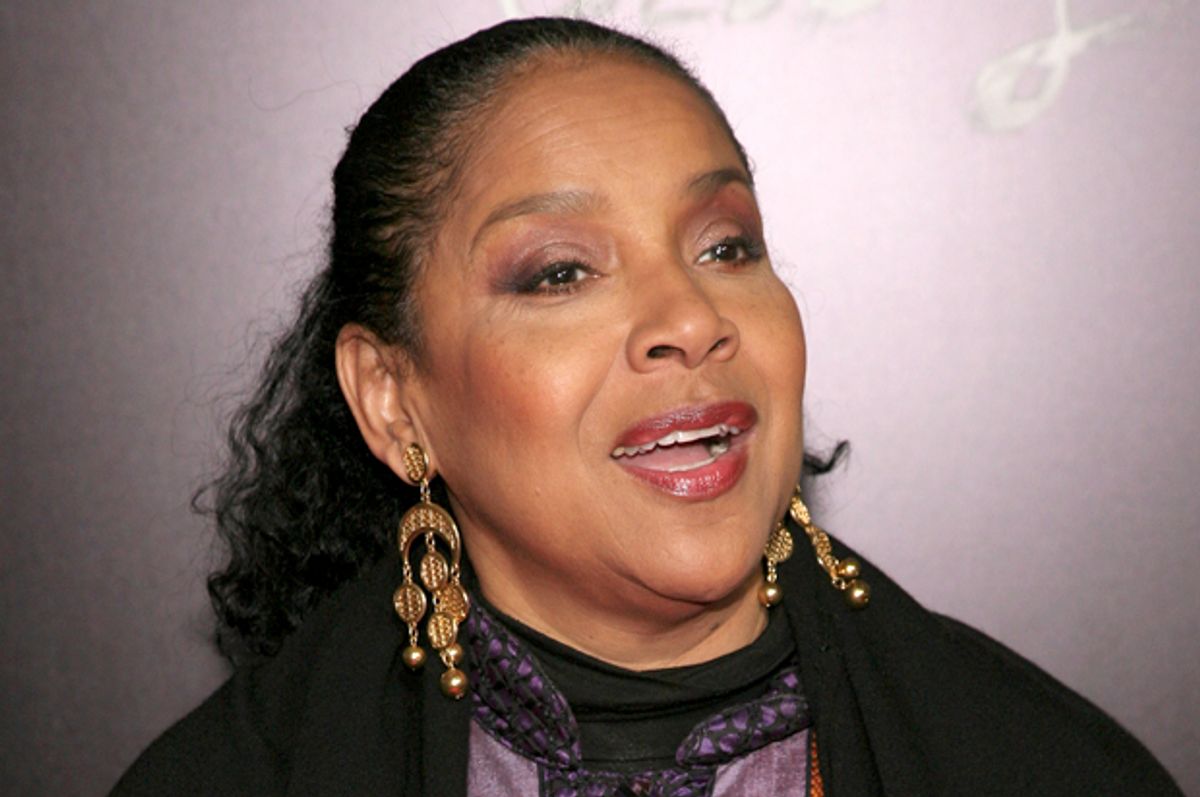 Phylicia Rashad broke her silence on the Bill Cosby sexual abuse allegations yesterday in an impromptu interview with Showbiz 411 columnist Roger Friedman who spoke with the actress, best known for her role as matriarch Claire Huxtable on “The Cosby Show,” at a lunch celebrating the film “Selma.” Rashad defended Cosby, saying that she never witnessed any of the abusive or violent behavior Cosby stands accused of by at least 20 women. “Forget these women,” Rashad told Friedman.

Rashad brushed off the allegations of supermodels Beverly Johnson and Janice Dickinson—both say he drugged them, Dickinson also says she was raped. “Oh, please,” she said.

“What you’re seeing is the destruction of a legacy. And I think it’s orchestrated,” said Rashad. Orchestrated by whom? Rashad didn’t say who could be pulling the strings. “Someone is determined to keep Bill Cosby off TV,” she told Friedman. “And it’s worked. All his contracts have been cancelled.”

In November, the nostalgia cable channel TV Land pulled reruns of “The Cosby Show,” NBC stopped development on his new sitcom and Netflix shelved his new comedy special as abuse allegations against the 77-year-old star began to grow. After a series of canceled stand-up tour dates, Cosby is slated to return to the stage tonight in Kitchener, Ontario, to a predicted mixed reception.

It might be comforting to Rashad and other supporters to think of the career fall-out surrounding the allegations as the fruits of a shadowy conspiracy to destroy Cosby’s legacy of groundbreaking television and educational philanthropy and advocacy, but it’s likely the result of a growing consensus—networks and venues don’t want to be perceived as tacitly supporting the alleged crimes of even the most beloved of sitcom stars, who now stands accused of drugging and/or sexually abusing 20 women. As conspiracy theories go, it’s an odd one whose motives remain elusive even to ardent supporters.

Keshia Knight Pulliam, who played youngest Huxtable daughter Rudy, also commented on the allegations this week after her stint on “Celebrity Apprentice” ended quickly when host Donald Trump “fired” her for not calling in a favor from Cosby to fund her philanthropic project. (The show was filmed before last November, so the context is more neutral than it seemed this week.) Pulliam was less vehement in her defense of Cosby, but she told Today, “all I can speak to is the man I know, and I love the fact that he has been such an example [and] you can't take away from the great that he has done, the millions and millions of dollars he has given back to colleges and education, and just what he did with ‘The Cosby Show’ and how groundbreaking that was.”

Pulliam also defended Cosby’s legacy to Wendy Williams, saying that there are “two sides to the story,” and "I feel that once the dust settles people realize how much he's given our society. You can't take that away.”

At this point there are at least twenty sides to the story alleging that Cosby has drugged and/or sexually abused women over several decades. The fruits of Cosby’s artistic legacy will endure—the new ABC sitcom “Black-ish,” for example, is a clear descendent of “The Cosby Show,” which destroyed the perception that sitcoms could only portray working-class African Americans. And his philanthropic legacy will remain intact through the good work his money funded. Knight Pulliam is right—nothing can erase that. But if the allegations against him are true, there’s also going to have to be room in the legacy Cosby has been building for decades to include a pattern of violence against women, which can't simply be canceled out. That's the tricky thing about personal legacies—by design, they're subject to public approval, which can't always be bought with charity and leftover goodwill.