We must stop deferring to religion: Laughable absurdities must be laughed at

It's time for honest discussion: We have a problem with religion. Let's figure out how we are going to deal with it 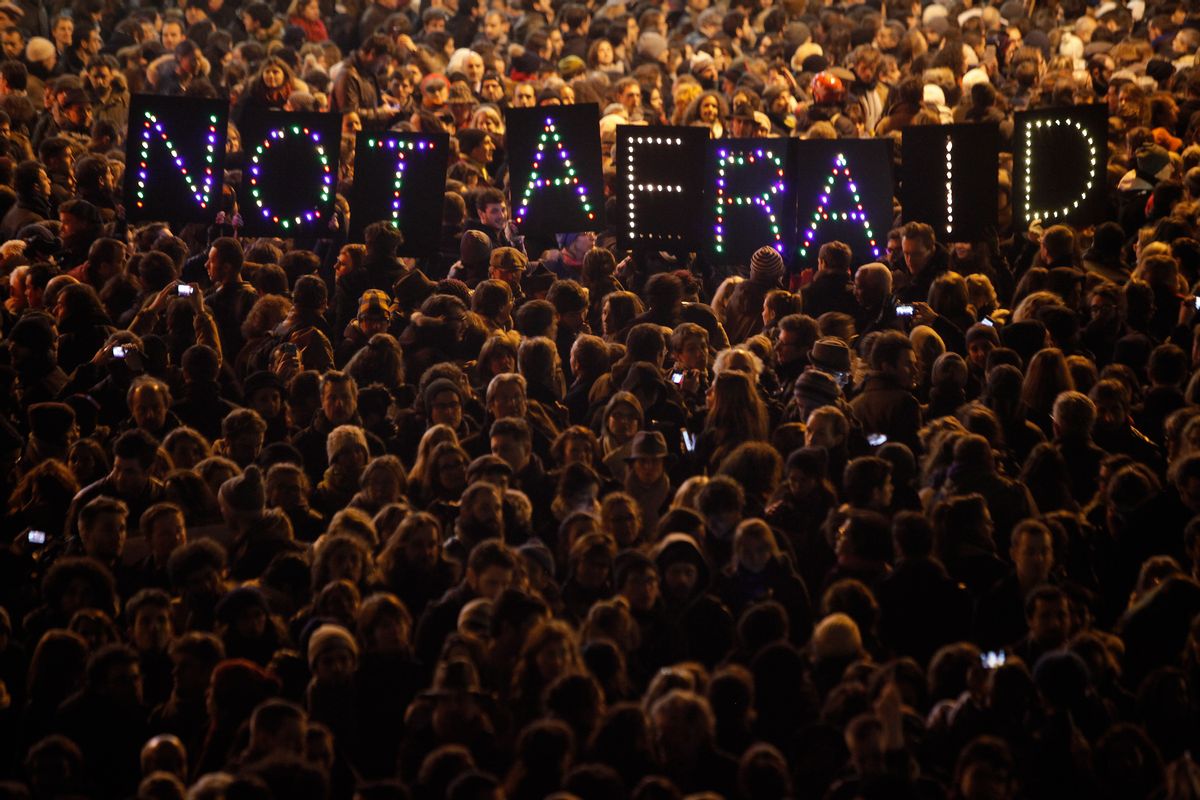 People gather in solidarity of the victims of a terror attack against a satirical newspaper, in Paris (AP Photo/Thibault Camus) (AP)
--

Two hooded men bearing Kalashnikovs burst into the Paris headquarters of the famed French satirical magazine Charlie Hebdo yesterday and assassinated 12 people, including four cartoonists.  As they committed their act of savagery, they shouted, “Allahu Akbar!” and “We have avenged the Prophet!” (surely for Charlie Hebdo’s repeated satire of Islam).  The men fled the scene -- as of first thing this morning, one suspect was in custody and police were searching for two others.  French Prime Minister Manuel Valls has raised Vigipirate, the country’s national security alert system, to its highest level in the Île-de-France region encompassing Paris, which means stepped-up police and military patrols.

This is the second major Islamist attack on the magazine; the first saw its offices fire-bombed in 2012, after it had published cartoons mocking the Prophet Muhammad. Staff members, some of them my friends, have lived with death threats (and police protection) ever since.  But the attackers, it seems, stormed through the officers on duty at the magazine to commit their crime.

The (liberal) French President François Hollande traveled to the scene of the slaughter and denounced an “act of exceptional barbarity.”  Former President Nicolas Sarkozy, a conservative, also condemned the “barbarism” and called for national unity in the face of an attack against “our democracy.”  President Obama issued a statement decrying the “horrific shooting.”  United States Secretary of State John Kerry voiced solidarity in France’s fight against the “extremism” targeting “free expression.”  Professing agreement with a French imam who, he said, called the victims “martyrs for liberty,” Kerry declared that, “Brave and decent people around the world will never give in to the intimidation and the terror of those seeking to destroy [the values of free expression and democracy).”

On and on the politicians’ avowals of support go.  Yet one word is absent from all the grave, aggrieved verbiage.  Surely their audiences will supply the missing noun, the prima facie yet material motive for the otherwise puzzling “exceptional barbarity,” the hitherto inexplicable “horrific shooting,” the nameless “extremism” – Islam.  Attackers shouting “Allahu Akbar!” don’t leave room for doubt.

Or at least they shouldn’t.  But you would not know it judging by the public responses of those tasked with assuring our safety and looking out for the common good.  It is incendiary to name Islam as a culprit in atrocities: perhaps a tenth of France’s population is Muslim or descended from those who have arrived from the shores across the Mediterranean.  Speaking frankly about Islam’s role in inspiring terrorist bloodshed would elicit cries of Islamophobia and intolerance, bigotry and even racism (as though a belief system could be congenital), all liberal bêtes noires as shameful as they are misbegotten.

Complicating matters, apologists would say, is that the West is hardly blameless.  The United States continues to wage a murderous drone campaign against those it designates “terrorists” in countries across the Islamic world; and this on the heels of its disastrous unprovoked war against Iraq, and a 13-year occupation, surely soon to be proved fruitless, of Afghanistan.  France is a former colonial power with deep footprints in the Muslim world; its own bloody 132-year sojourn in Algeria, for example, still bears bitter fruit in that country.  And plus, there are lots of peaceful Muslims.  So maybe it would be easiest and most politic to ignore, to passer sous silence, Islam’s role as a material element in the “horrific shooting” that took so many lives in Paris just now.

To do so might be easiest and it certainly is the most politically expedient, but the rank cowardice implicit in such a decision cannot fail to provoke outrage.  The attackers left no doubt about what drove them, and they can cite scriptural sanction for their savagery: the Quran (33:61) warns that those who insult Islam – and, as riots in the Middle East over Danish cartoons in 2006 showed, satire, in the eyes of too many Muslims, equals insult -- “shall be seized and slain (without mercy).”  Salman Rushdie, despite a fatwa ordaining his murder (for his 1988 novel "Satanic Verses"), has so far escaped this fate; the Dutch filmmaker Theo Van Gogh (for his film "Submission," documenting violence against women in the Muslim world) was not so lucky.

There are many other well-known examples.  The point is, Islam is implicated in all.  The “holy” texts of Islam, regardless of interpretation, offer literal justification to those who wish to commit violence in the name of the faith; and religious extremism, by far mostly Islamist, has been, since 2001, the main cause of terrorism across the world.

Faced with this uncomfortable but persistently deadly reality, what should we and our politicians (and pundits) do?  For starters, we need to cease granting religion – and not just Islam – an exemption from criticism.  If we do not believe the fables foisted on us (without evidence) by the faithful, we need to say so, day in and day out, in mixed company, and especially in front of children (to thwart their later indoctrination).  We must stop according religion unconditional respect, stop deferring to men (and mostly they are men) who happen to preface their names with the titles of reverend or rabbi or imam, and de-sanctify the sacred, in word and deed.

Laughable absurdities – be they virgin births, parting seas, spontaneously burning bushes – deserve not oblique pardons (“We don’t have to take everything in the Bible literally”), but outspoken ridicule; courses in “religious studies” in campuses across the country might better be referred to as “lessons in harmful superstition, dangerous delusion, and volitional insanity.”

Sorry, hashtag activism – even the #WeAreAllCharlieHebdo campaign underway on Twitter – won’t do.  To avert more deaths, we have to stand up in real -- and sometimes risky -- ways to noxious ideologies masquerading as salvific faiths.  Pundits need to overcome their fear of being labeled “politically incorrect” and speak their minds.  Politicians must come clean with their electorates and state, simply, “With Islam, we have a problem.”  Better still, “We have a problem with religion.  Let’s figure out how we are going to deal with it.”

Few are doing this now, but one group is -- the topless protest movement Femen.  By email I reached the leader of Femen in France, Inna Shevchenko, a frequent subject of Charlie Hebdo’s (admiring) coverage, who knew and was friends with the slain, including Charb, the cartoonist who was also the magazine’s director.  Femen has won notoriety for its bare-breasted protests against Islam, including this one, and countless bold demarches against Catholicism there and elsewhere.

“Our friends at Charlie Hebdo were brave journalists and activists, free thinkers who would not fall on their knees as a gest of tolerance toward Islam demanded of them,” she told me.  “They were murdered for freely expressing their opinion.  They do not deserve to have the reason for their deaths suppressed. They were killed for Islam ... in the name of Islam.”

When will our politicians find the courage to announce the same?  We need to withhold our votes until they do.  The stakes for all of us could hardly be higher.