Huckabee's time in conservative media turned him into something worse: just another petty, "outrageous" pundit 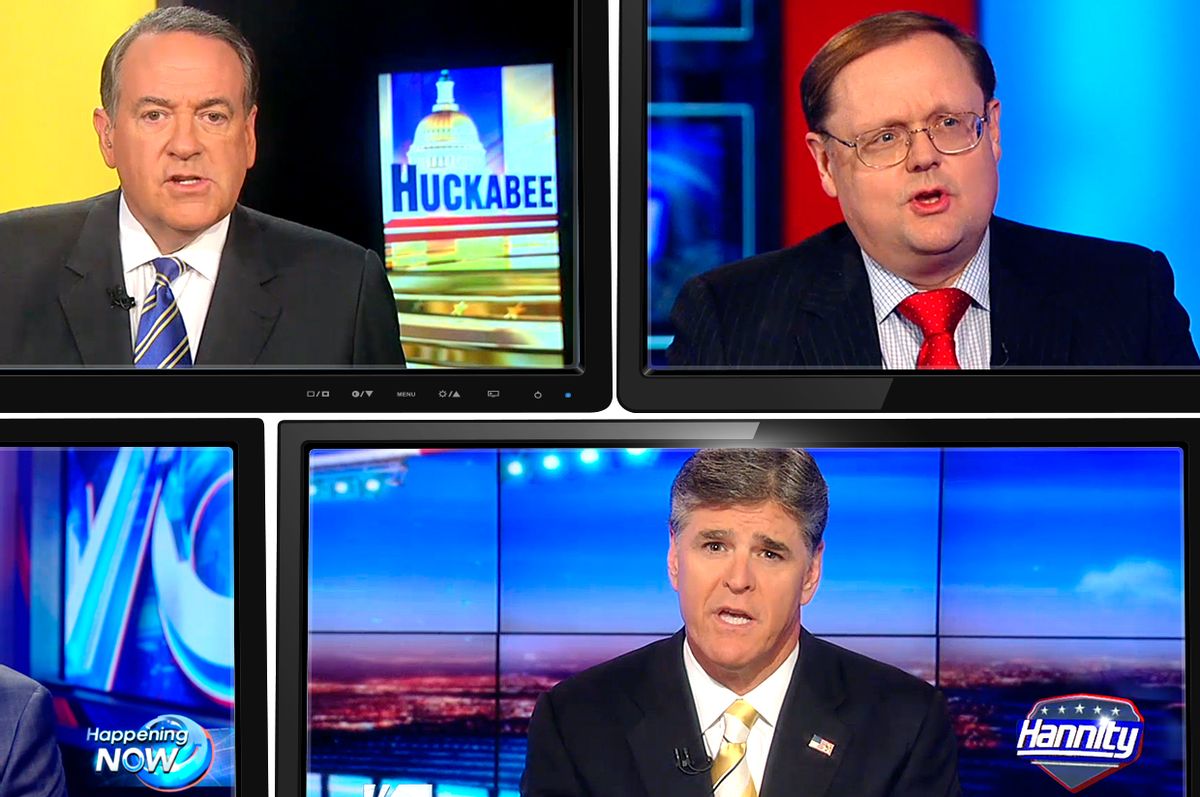 The New York Times’ Jonathan Martin made a sharp observation yesterday about the political reeducation of potential 2016 candidate Mike Huckabee as reflected in the tone of title of his most recent book, “God, Guns, Grits and Gravy.” The book and its unapologetic embrace of good-old-boy Southern conservatism are a world apart from Huckabee’s former life as a health-nut exercise guru who used his own story of weight loss to evangelize the benefits of fitness and proper nutrition.

It is almost unthinkable that an aspiring Republican presidential candidate would do the same today, given conservatives’ strenuous opposition to Michelle Obama’s health eating and exercise campaign.

In its own vivid way, Mr. Huckabee’s march from author of a self-help and clean-living guide to cheerleader of artery-clogging calories and conservative traditionalism highlights the Republican shift during the Obama era.

Both Ed Kilgore and Paul Waldman have pointed out the absurdity of the fact that Huckabee and other conservatives have staked out pro-fat, anti-exercise positions simply because they believe it to be an act of resistance to the Obama administration. This business of being pettily abrasive merely because it irks the other side is certainly not a new feature of politics, but Republicans seem to have a special affinity for it. Ask your average Republican politician, conservative activist, or Fox News host which political party the president belongs to and they will invariably answer: “the Democrat Party.” Republicans and conservatives from George W. Bush to Rush Limbaugh to the lanyard-sporting CPAC attendee have made a habit of dropping the final syllable from “Democratic” because they think it annoys Democrats. Is it petty? Absolutely. And the very fact of its pettiness has enshrined it as part of the conservative vernacular.

One point that must be made, however, is that so much of this is driven by conservative media. Fox News and talk radio long ago figured out that reflexive opposition to anything and everything Obama does is what conservatives want, and the pettier the objection, the better.

Teleprompter jokes stand out as the best, most absurd example of this phenomenon. There are few less offensive things that a politician could do than use a teleprompter when delivering remarks in public. At this point it could probably be considered best practices – with reporters and activists and campaign trackers forever on the hunt for verbal slips and “gaffes,” politicians are incentivized to remain as tightly scripted as possible. But Obama’s use of a teleprompter has become a long-running conservative inside joke. It started in 2008, with conservative radio hosts mocking Obama for stumbling as he spoke extemporaneously. From there it snowballed to the point that Republican presidential candidates were cracking wise about not using teleprompters on the campaign trail. Simply uttering the word “teleprompter” at a gathering of conservative activists will elicit hoots of laughter and applause because Obama uses a teleprompter sometimes and that makes it hilarious.

There are so many other examples: light bulbs, golfing, lattes, arugula – each one has become an object of conservative and Republican derision for no reason other than Obama at one point came into contact with them and someone in the right-wing media thought it was funny and/or outrageous.

In Huckabee’s case, his transformation does reflect the fact that conservative politics has largely redefined itself as being anti-Obama. But it’s also a consequence of the years Huckabee spent as part of the conservative media. “God, Guns, Grits and Gravy” is, according to the poor souls who’ve read it, full of the sort of “outrageous” commentary that one would expect from an attention-hungry conservative pundit. And apparently there’s some shock among reporters that the folksy former governor and preacher-man would say or write outrageous and offensive things.

Perhaps it would have been strange for the Mike Huckabee of 2007 to make statements like this, but they make a lot more sense once you remember that Huckabee has spent the years since his last presidential bid in and among the conservative media, figuring out what he needs to say to get people to watch his (recently ended) Fox News show and listen to his podcasts. Huckabee has become so much a creature of conservative media that he’s pulling the same scummy, bottom-feeding scams that talk radio hosts ply upon their listeners, swindling them with Bible-inspired medical advice and investment strategies.

Whatever Mike Huckabee once was, he’s a conservative pundit now. In many ways he’s similar to Sarah Palin, having transformed his political stardom into a lucrative media career. Keeping that career going means you have to say crazy things, take petty shots at the president, and, from time to time, make noises about running for president.